If you follow me on Instagram you may have seen in my stories that I dined in the Skye Bothy at London Cocktail Week. This ‘traditional’ Scottish hut came all the way down from Skye for the 10th anniversary of London Cocktail Week however it’s story is a little more complicated than that. Read on to find out the back story and also what we ate and drank in the Skye Bothy from Drambuie. #cheatingongin again! 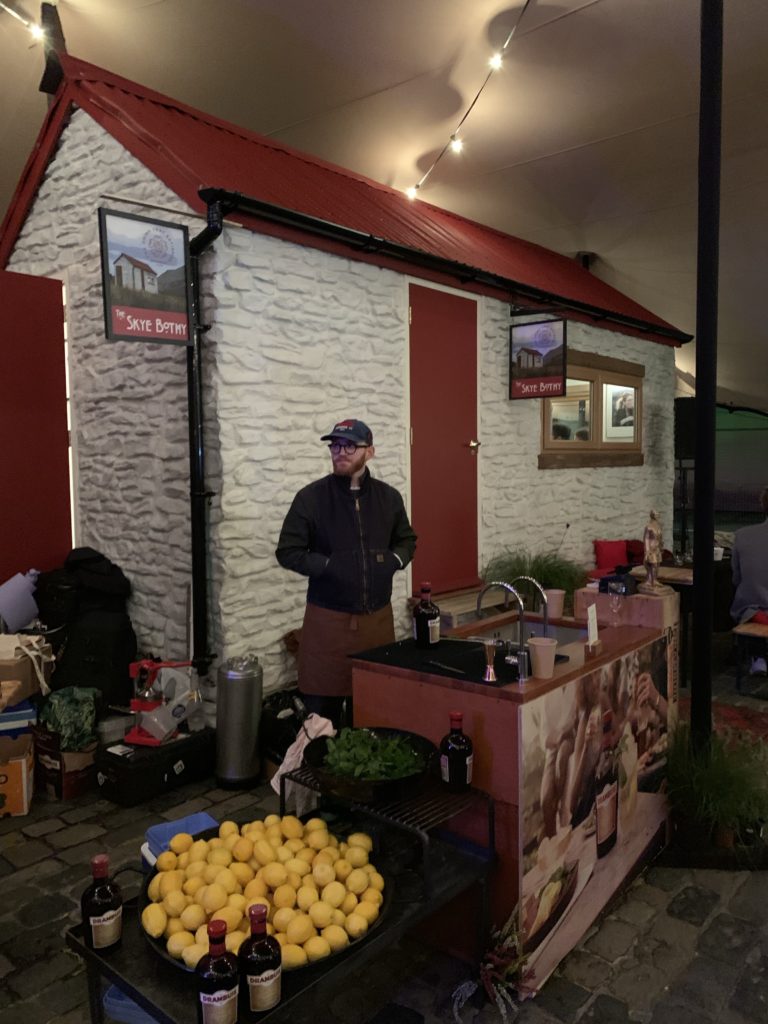 The Skye Bothy at the London Cocktail Week Village 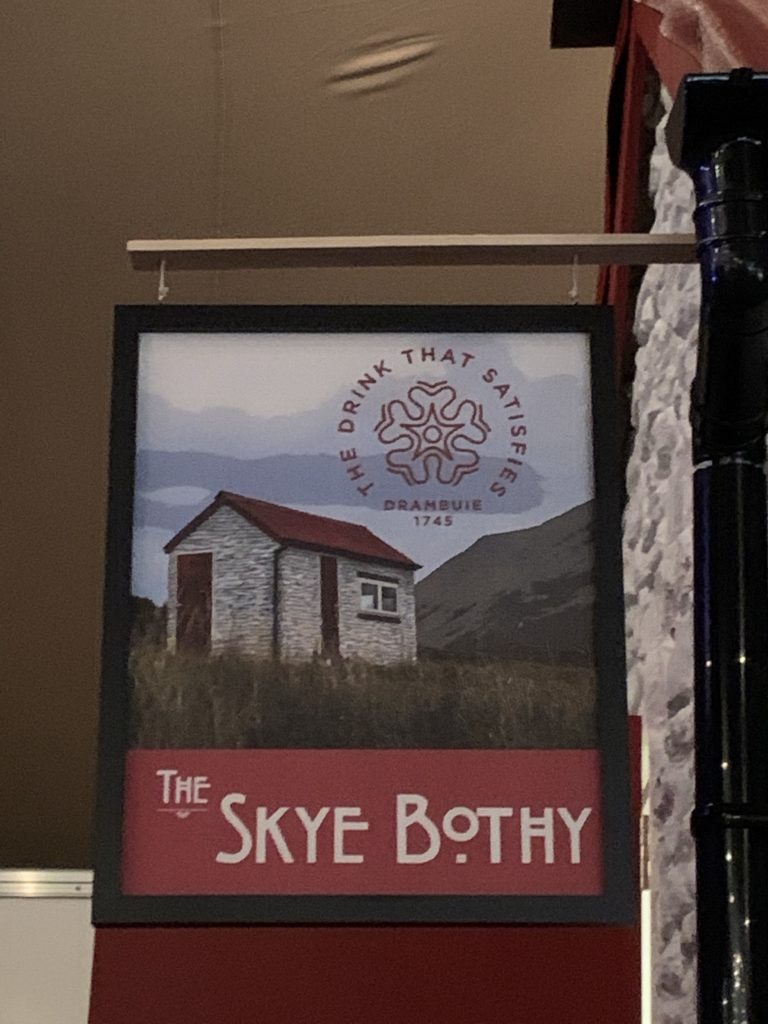 The Skye Bothy as it looked on the Isle of Skye

*Full disclosure, my meal and drinks at the Skye Bothy were free in return for this review. All opinions remain my own*

Drambuie is a whiskey liqueur, combining herbs and spices with local whisky, sugar and honey. The name is said to come from the Scottish Gaelic phrase an dram buidheach, ‘the drink that satisfies’, which was a claim made by the original manufacturers. 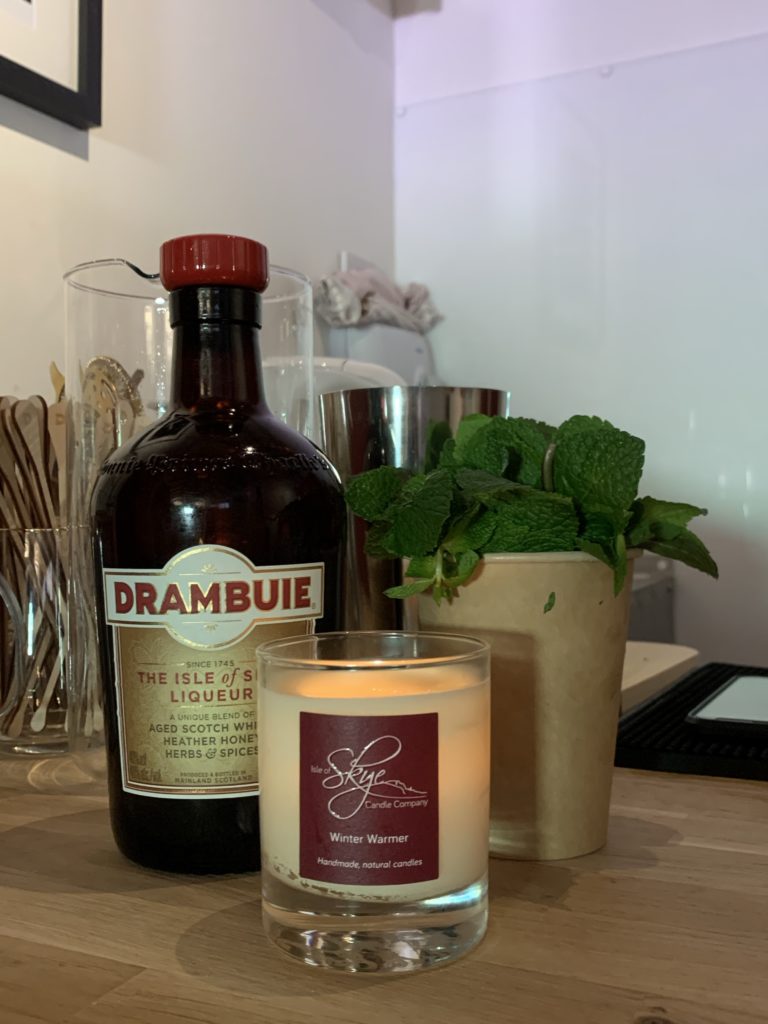 When Drambuie were looking for a way to show case the Scottish-ness of their whisky liqueur, as well as a feel of where it comes from. Drambuie is said to have originated on the island of Skye from a recipe passed on by Bonnie Prince Charlie, whilst he was on the run. (Read more about the history around this claim in this Difford’s article). 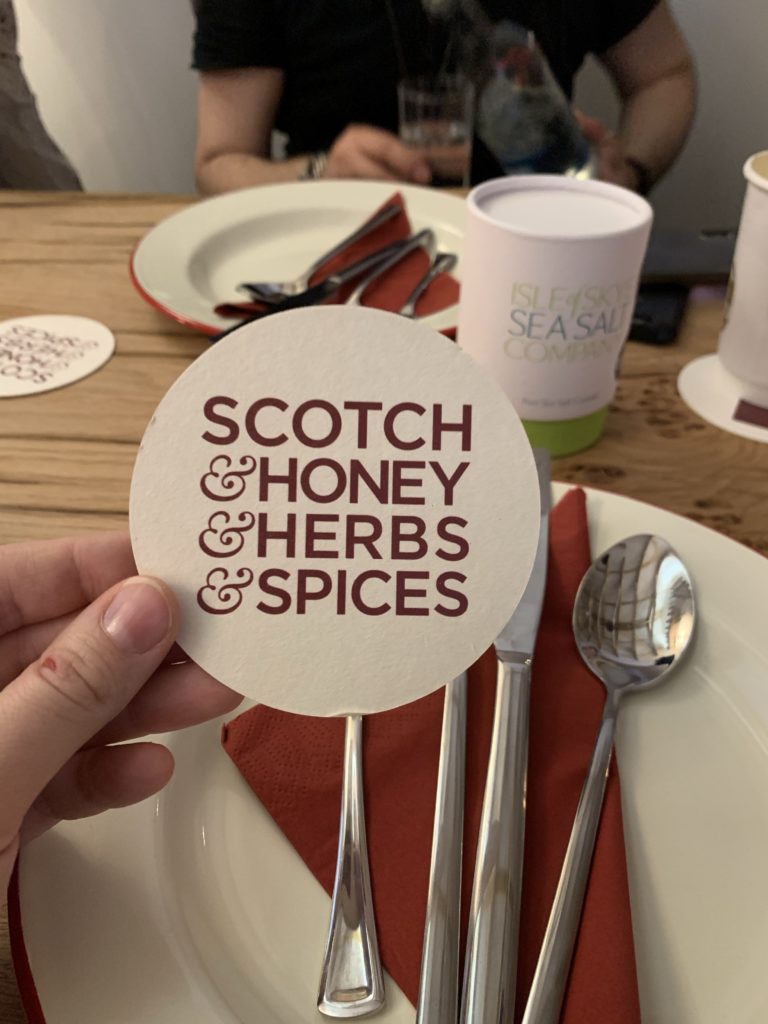 The key parts of Drambuie

So the Drambuie team thought it would be a great idea to host a food and cocktail matching dinner in a traditional bothy on Skye. A bothy is a shelter, usually a stone hut, that is used by shepherds and hikers. Unfortunately they couldn’t find a traditional bothy that would provide sufficient shelter (that wasn’t full of sheep already!) So they built their own, on wheels – this is relevant… Freddy May the Global Brand ambassador told us how the bothy was made down in England and then towed all the way up to Skye for the inaugural dinner. It was built sturdily, to endure the weather on Skye, with double glazed windows and a wood burning stove to keep everyone warm. 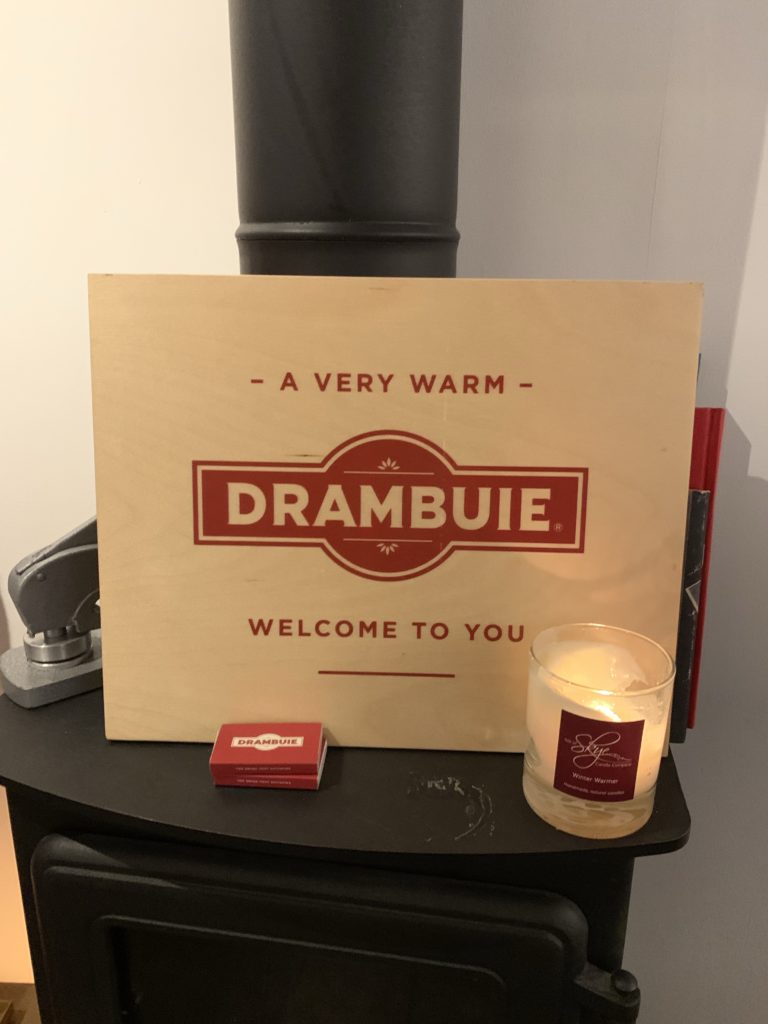 The wood burning stove wasnt required the evening I went

After that the bothy was then towed back to London for the 10th anniversary of London Cocktail Week – it mainly survived this epic journey (just one light fitting broken!). London is where I got to see the inside and sample a menu of simply (but superbly) cooked food, accompanied by Drambuie cocktails. 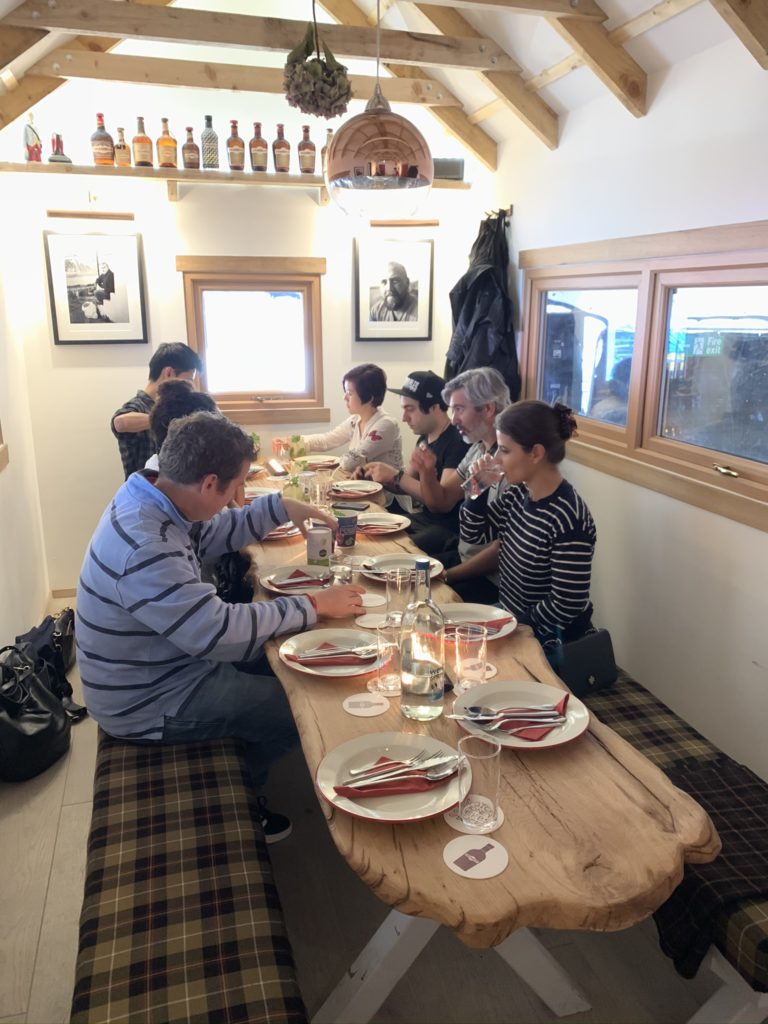 Inside the Bothy with its unique single piece wooden table

We were welcomed with a Drambuie Collins. 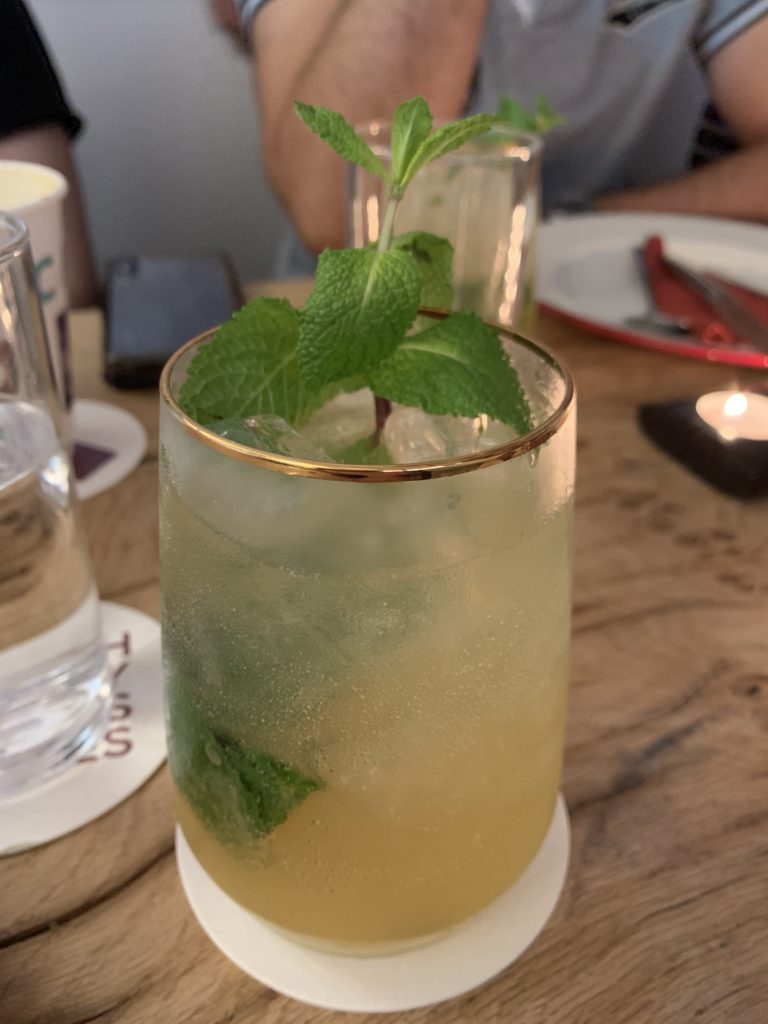 Drambuie was mixed with lemon juice, topped up with soda and garnished with refreshing mint. Usually a Collins is made with gin and includes sugar syrup to balance the lemon juice, however with Drambuie, the sweetness from the honey means that nothing else is required. 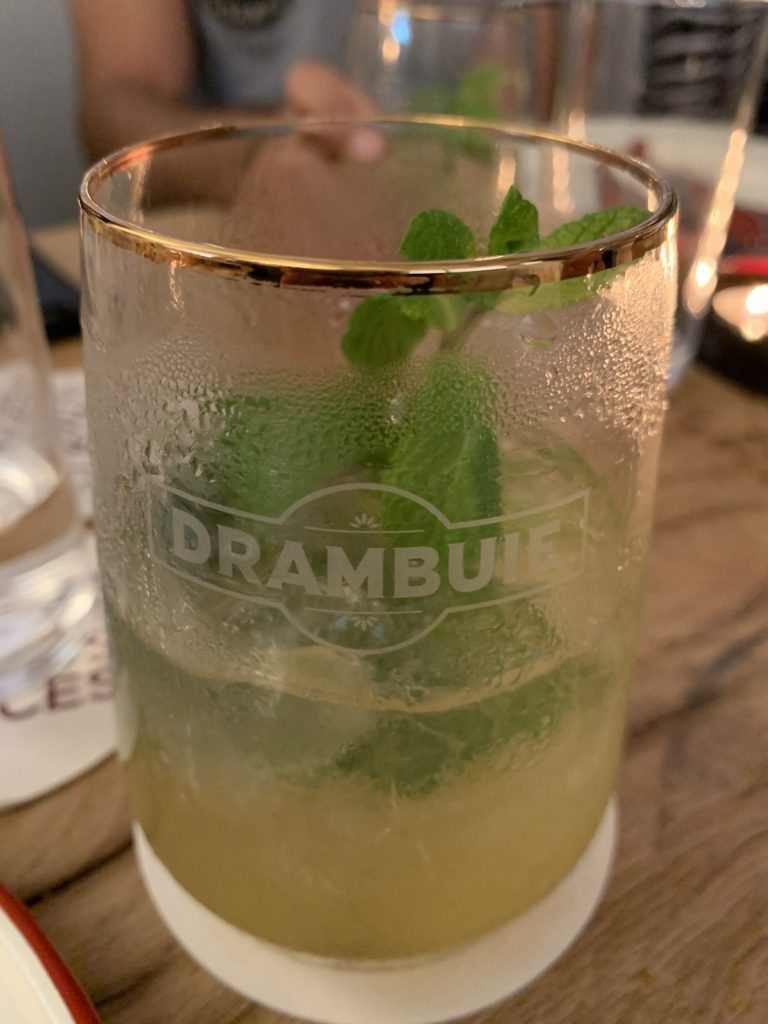 Everything we ate was cooked outside the Bothy on an open fire. So it all had the character of a wood fire. I was surprised about how much I liked the starter of grilled oysters. I usually eat them raw and cold, but these cooked ones with fresh herbs were delicious (albeit hot!). 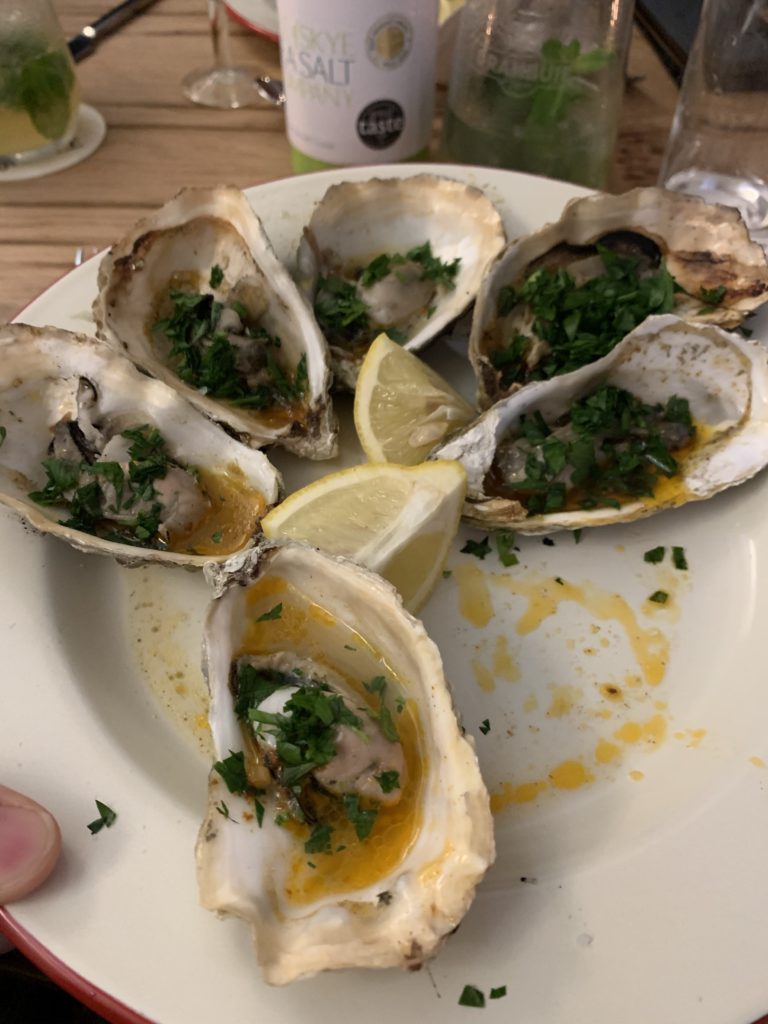 The grilled oysters were served alongside blackened leeks with toasted peanut & chilli oil, which were fab too! 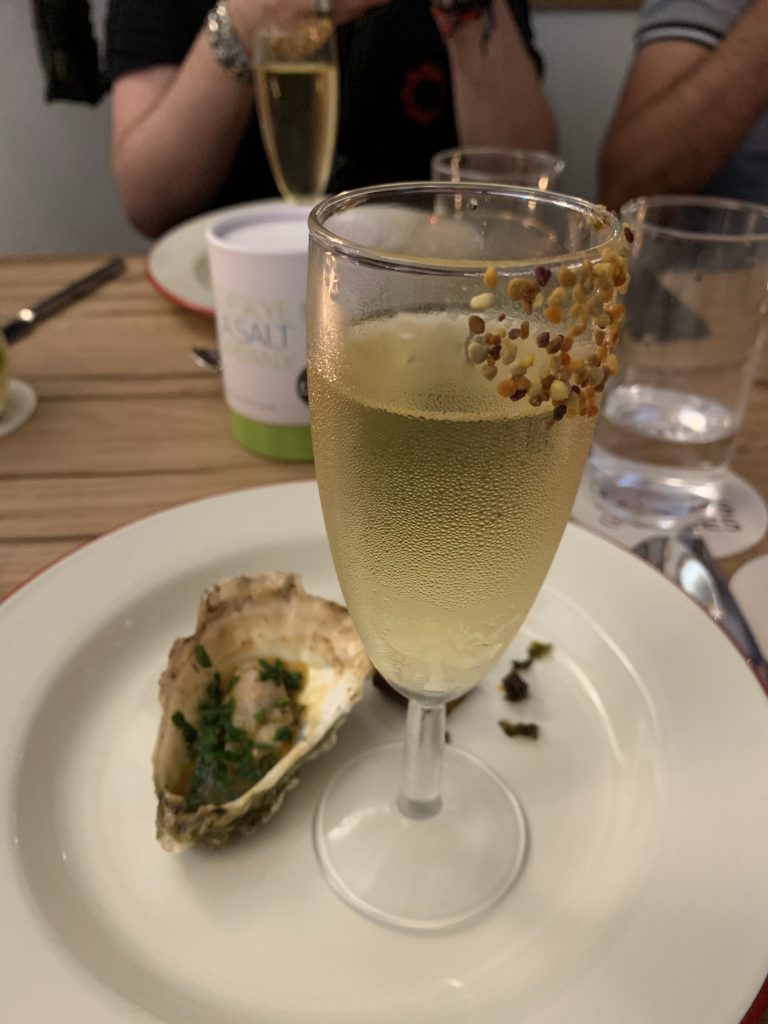 The white wine-esque cocktail is actually equal parts of Drambuie, Muscadet, Fino sherry and some orange bitters. This drink really surprised me with it’s sophistication and by demonstrating the breadth of what is possible when drinking and mixing Drambuie.

We were treated to the most amazing salt cellar aged ribeye steak, as well as whole roast vegetables. 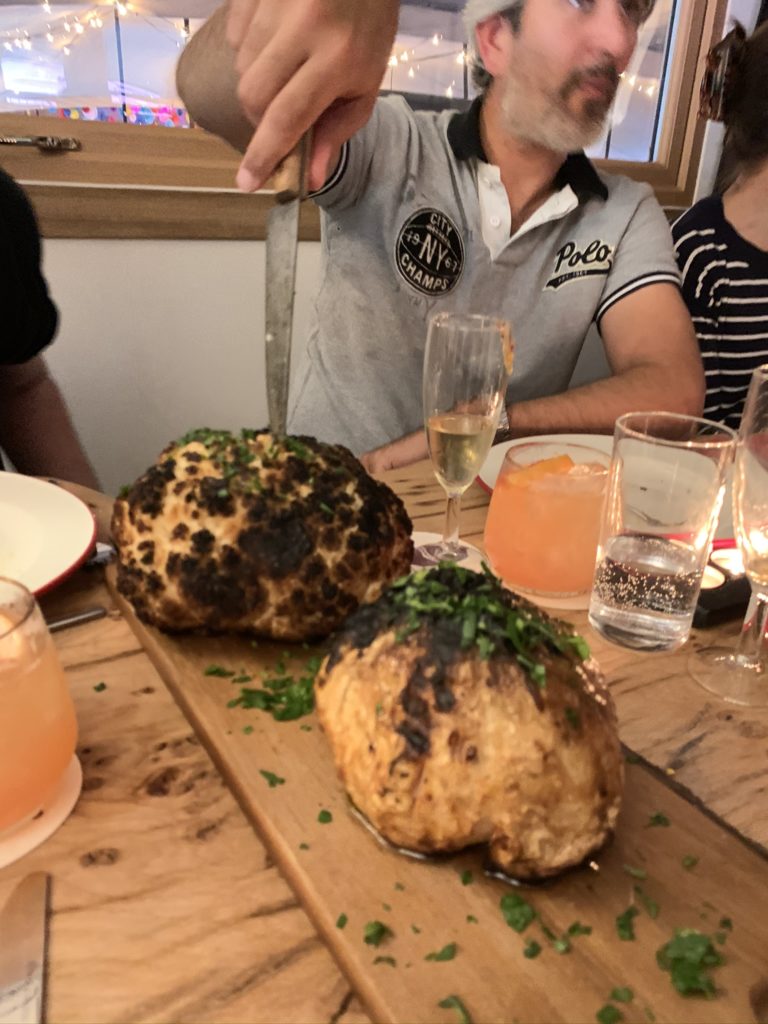 Getting ready to carve up the whole roasted veggies

The vegetables were roasted whole and served up on boards to be shared family style. This also meant that we had to carve them up. 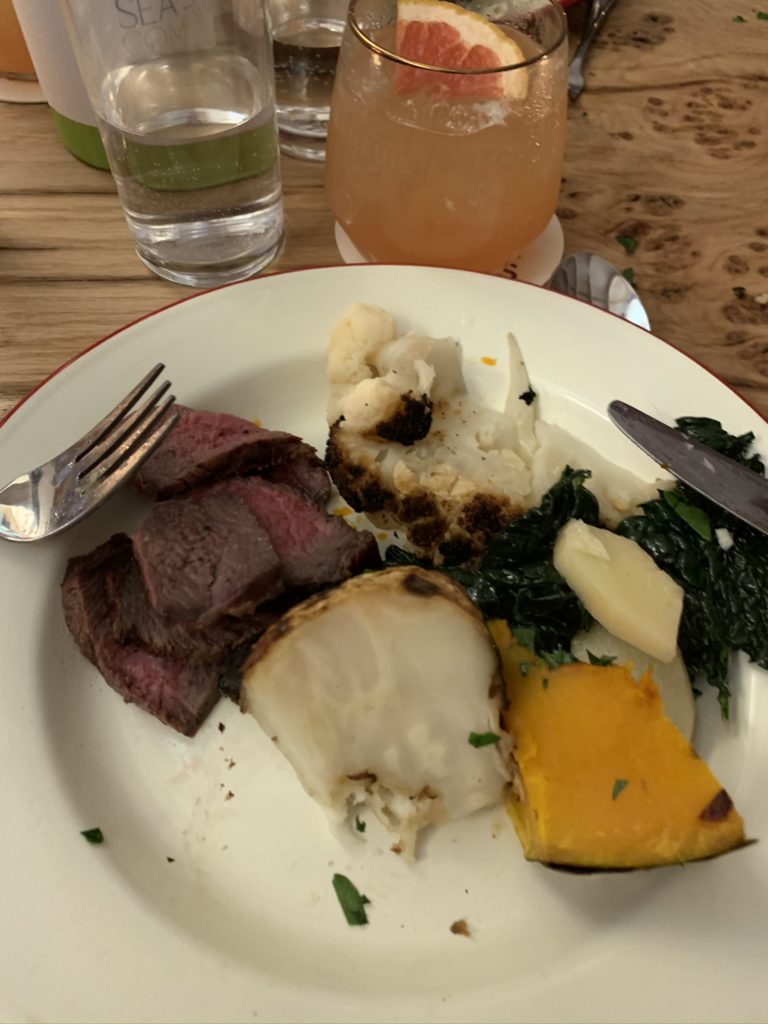 Round 1 of ribeye – there was more to come… 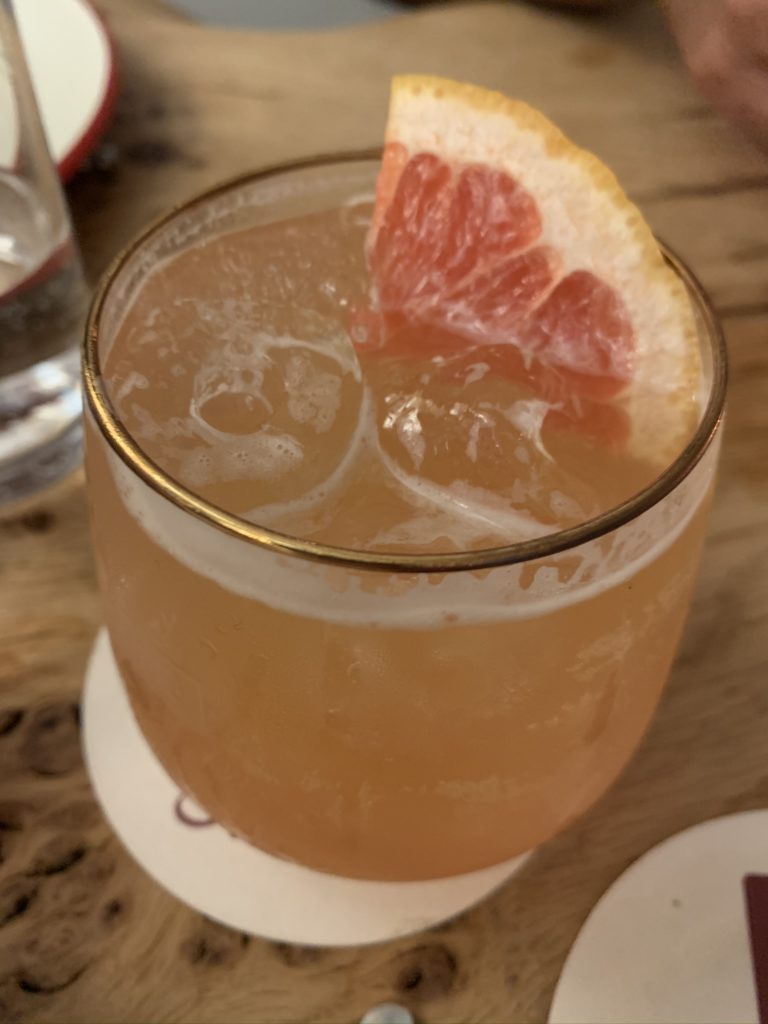 Served with the main – the Drambuie Hootenanny

The Hootenanny cocktail is Drambuie and grapefruit juice, shaken together and topped with non-alcoholic German wheat beer. This meant that it was a low alcohol cocktail, with only 1 unit of alcohol. It also worked really well – I found the combination of grapefruit and wheat beer with the Drambuie very refreshing. It was a nice light drink to have with a rich meal. 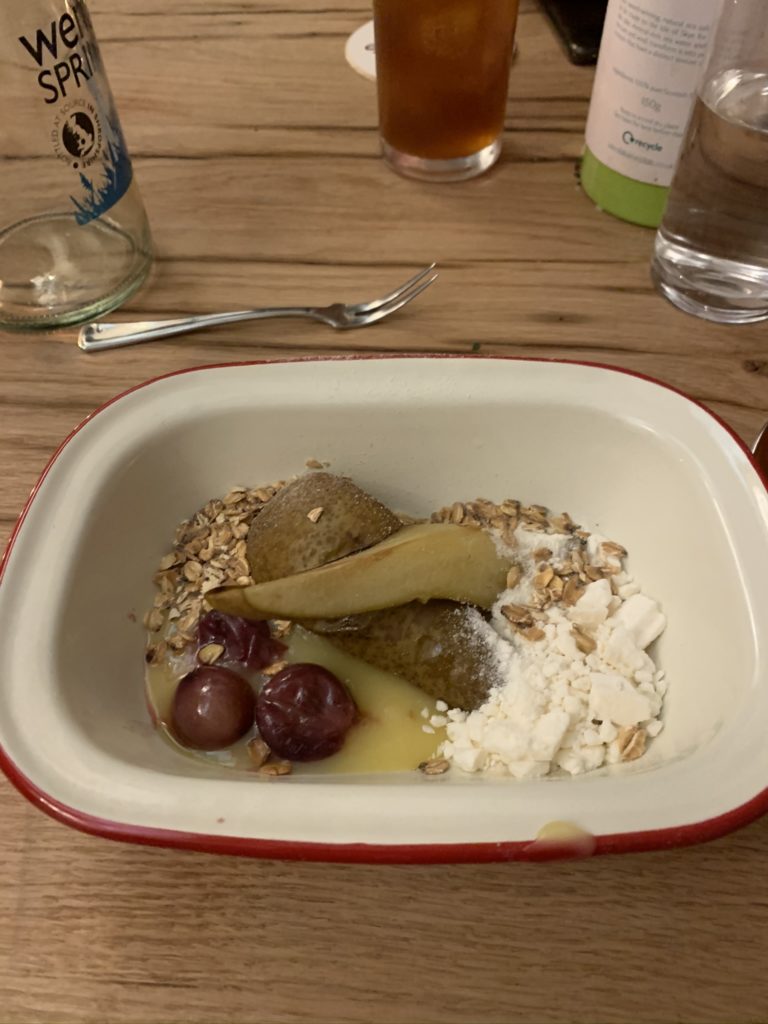 Dessert was a deconstructed crumble

Was it a lemon meringue pie or a take on a crumble? Whatever this dessert was delicious with the Drambuie lemon curd. 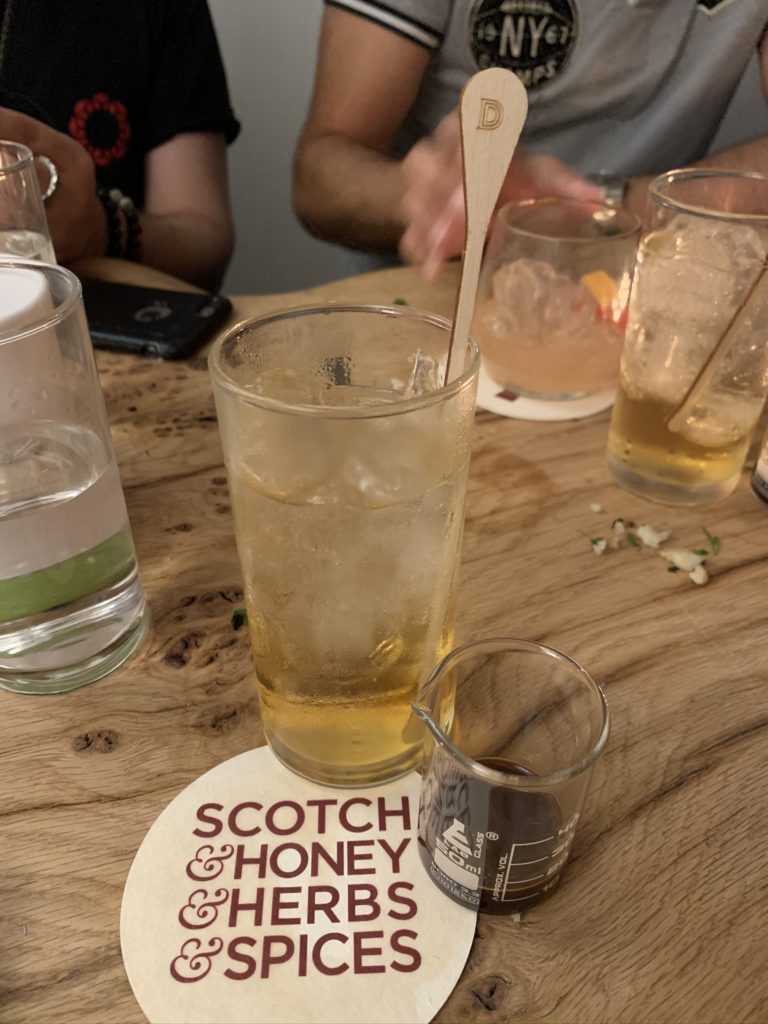 To go with dessert we had a Drambuie Cafe Tonic – i.e. Drambuie and tonic where you could add coffee to taste. This was an interesting take on mixing a cocktail with an after dinner drink.

After dinner we all had a go at cracking Chef Ruaridh’s hot toasted nuts! This was a lot of fun with the cast iron pan and the trick was to crack the shell without breaking the nut into pieces. 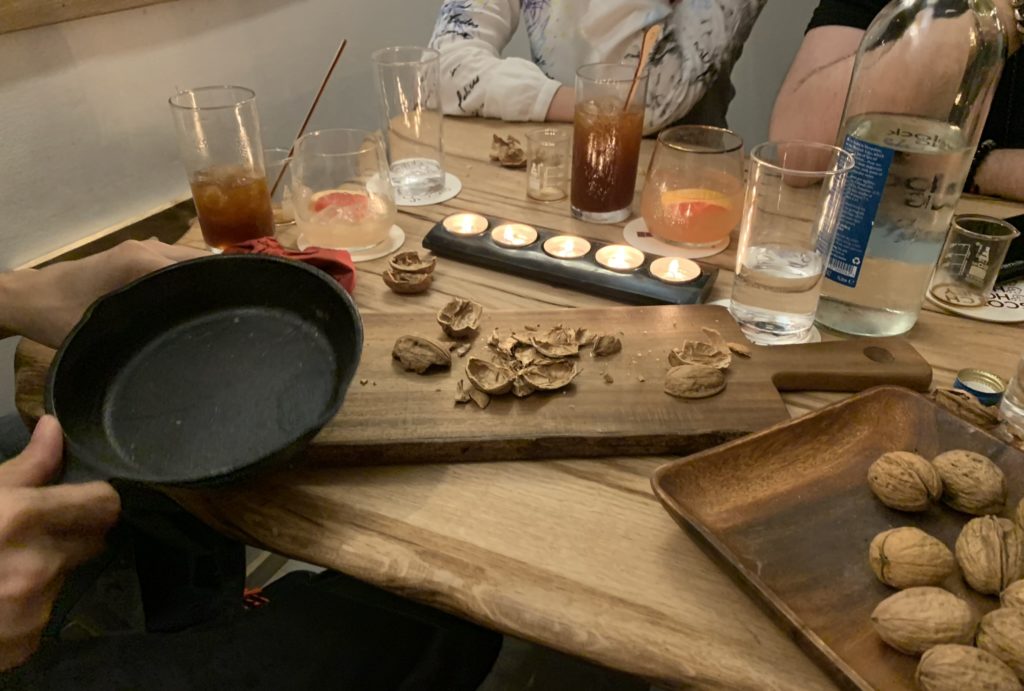 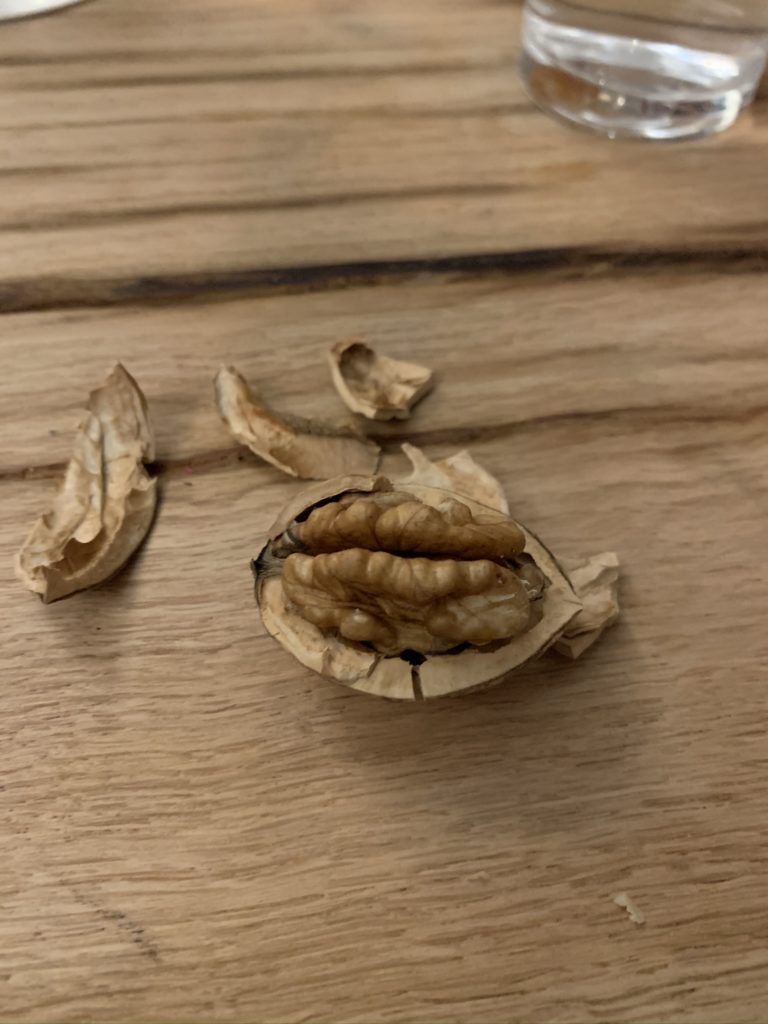 I really enjoyed my evening in the Skye Bothy – the food was amazing and the drink pairings unique. It definitely showed me a different way to serve Drambuie – something I wouldn’t immediately have thought of as a food pairing drink before. At £80 a ticket, it wasn’t cheap, but you got a very limited edition experience. I left with a full belly and happy taste buds, ready for a lazy Sunday evening! If you get the chance to try out the Skye Bothy, where ever it may be in the world, then I highly recommend that you do it! 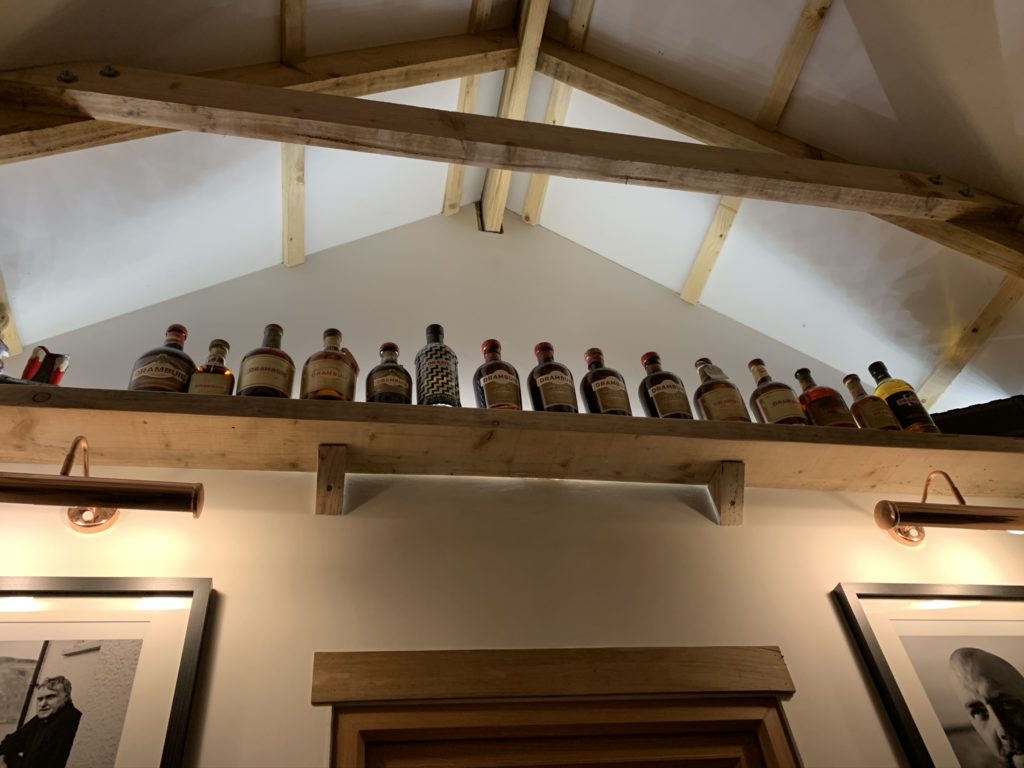 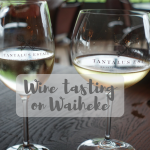 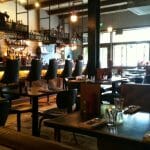 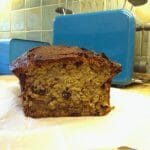 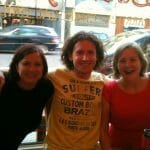