Where do you go when you fancy cocktails and a nice dinner with a view? Heron Tower is an easy option in London, and Sushi Samba perfect when you can get a table!

Girls dinner with a view 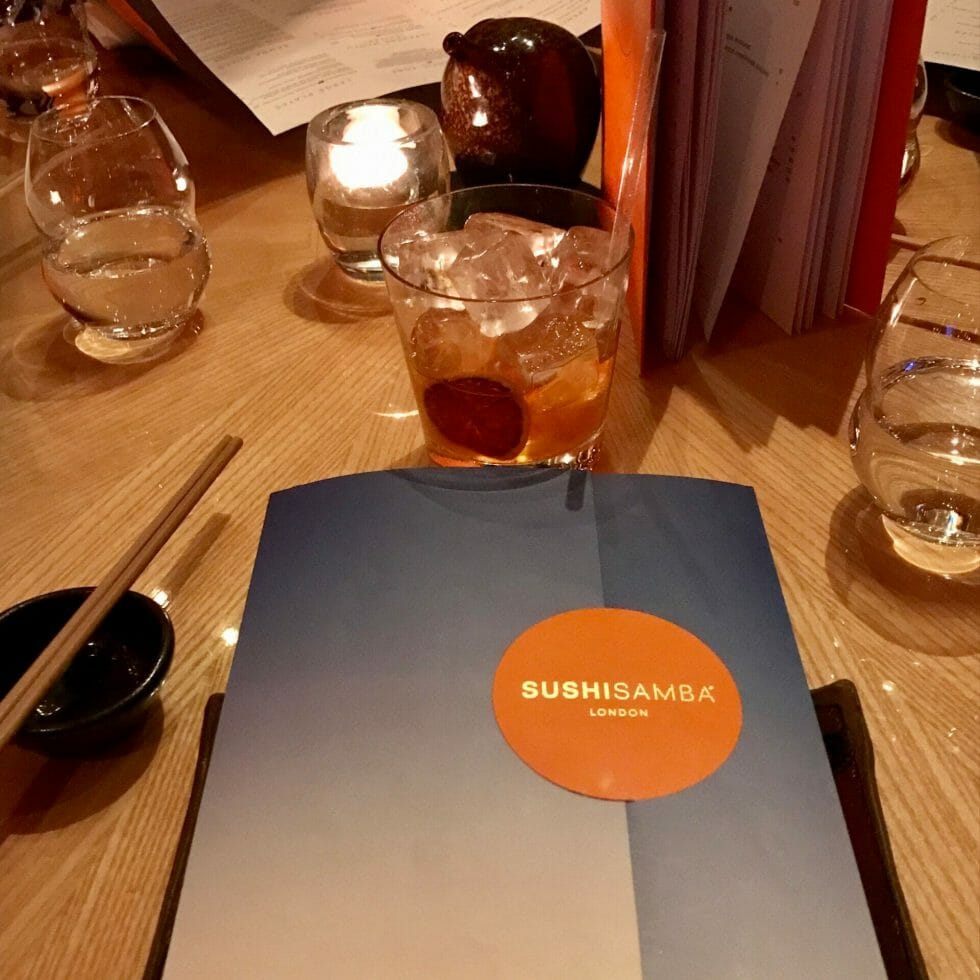 Chopsticks at the ready!

We started with cocktails at the bar. Unlike those upstairs in Duck and Waffle I thought they were more hit and miss. My Japanese twist on a negroni, using the plum sake umeshu was pleasant, however some of the other cocktails were too sweet. Perhaps the barman on that evening had a sweet tooth? 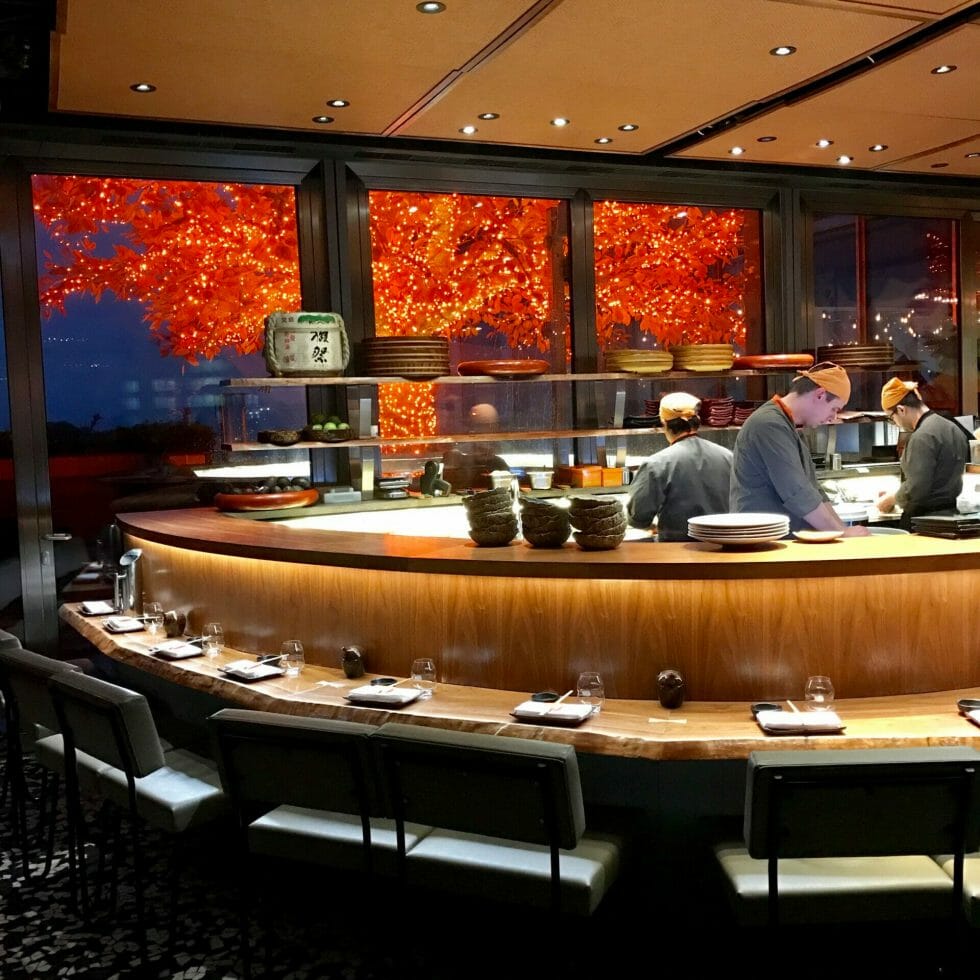 The bar food area around the sushi kitchen – you can see the orange leafed tree on the outside terrace. Anyone else think of the Faraway Tree when they see that? (Enid Blyton books)

But we were really here for the food!

We went for a mixture of small and large plates from across the menu. A gimmick to get to you buy more or playing to those like me who like to try everything? The jury is out on that one, but I enjoyed eating my way through most sections of the menu 🙂 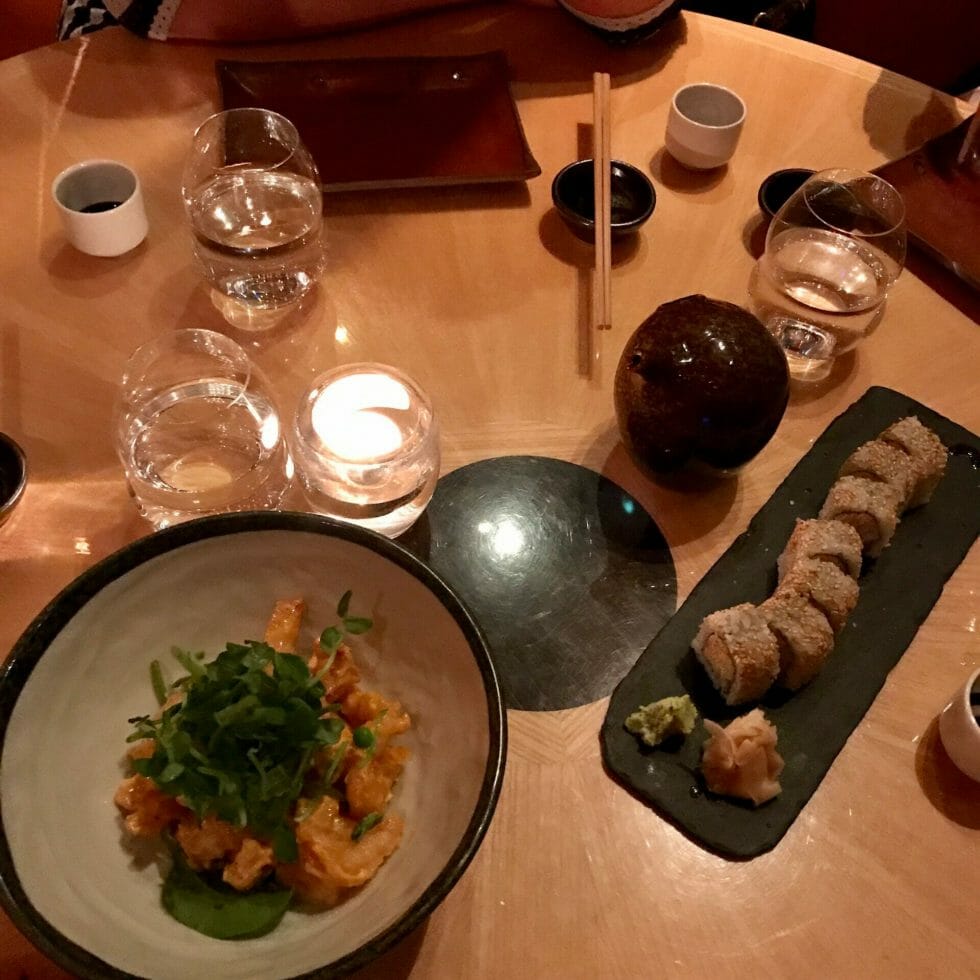 The shrimp tempura (which looks like a salad) was very nice, with a spicy truffle dressing complementing it. The roll however was not great texture or flavour. I think this was the California maki, but I can’t recall, not great when I was that ordered it. 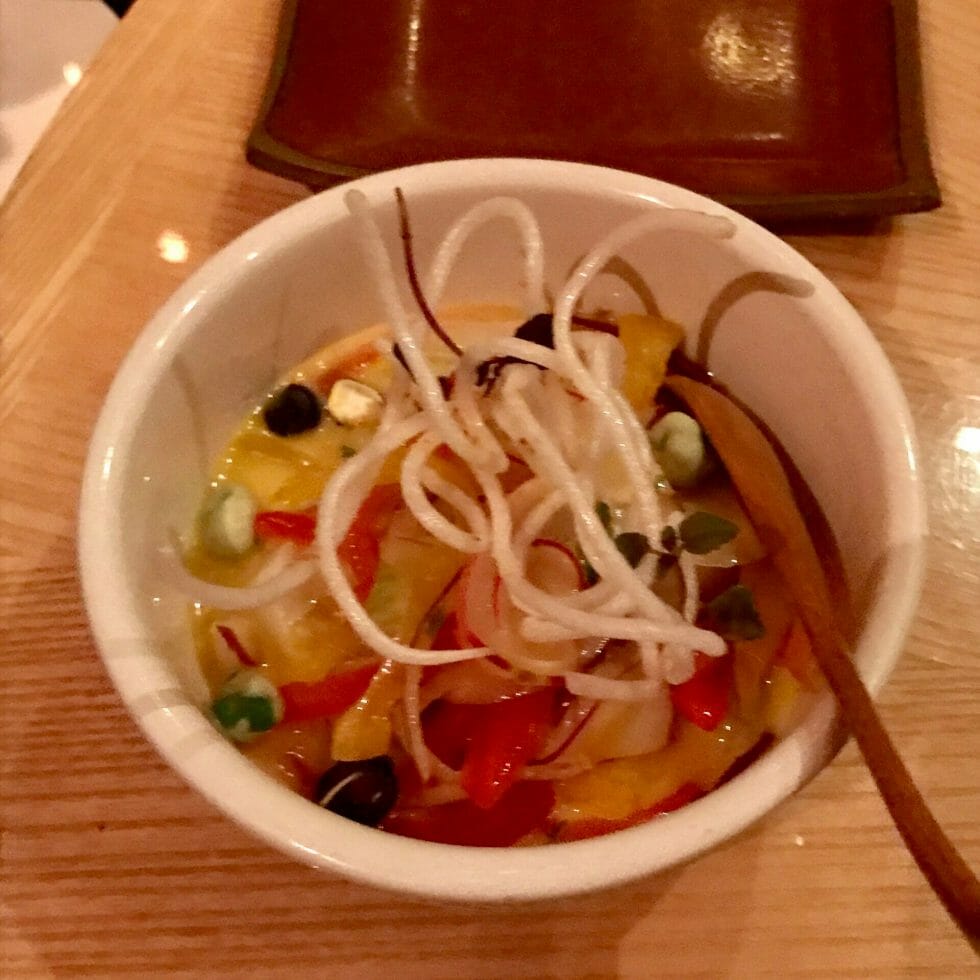 The ceviche came with pickled mandarin and mandarin leche de tigre and shiso. Showcasing the restaurants’ ability to mix up the traditional from both the Japanese and South American sides of the menu. 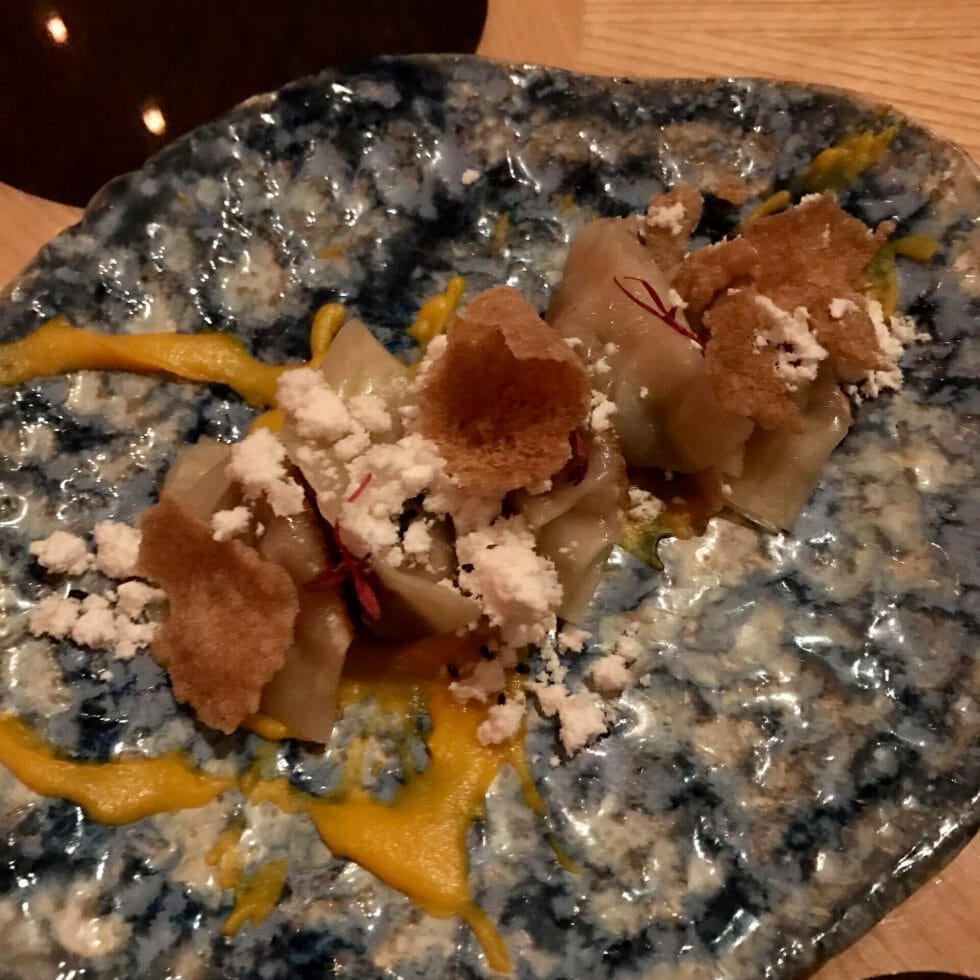 Wagyu gyoza with kabocha puree and probably some truffle (they use truffle oil liberally in here!)

They are truffly versatile! I like truffle so the liberal use on most dishes went down a treat with me. Some of my friends weren’t so keen. I do believe that truffles should only be used sparingly, where they complement the food in season (i.e. only in Winter!). In this case the gyoza were very tasty, but I don’t think they showcase the Wagyu particularly. 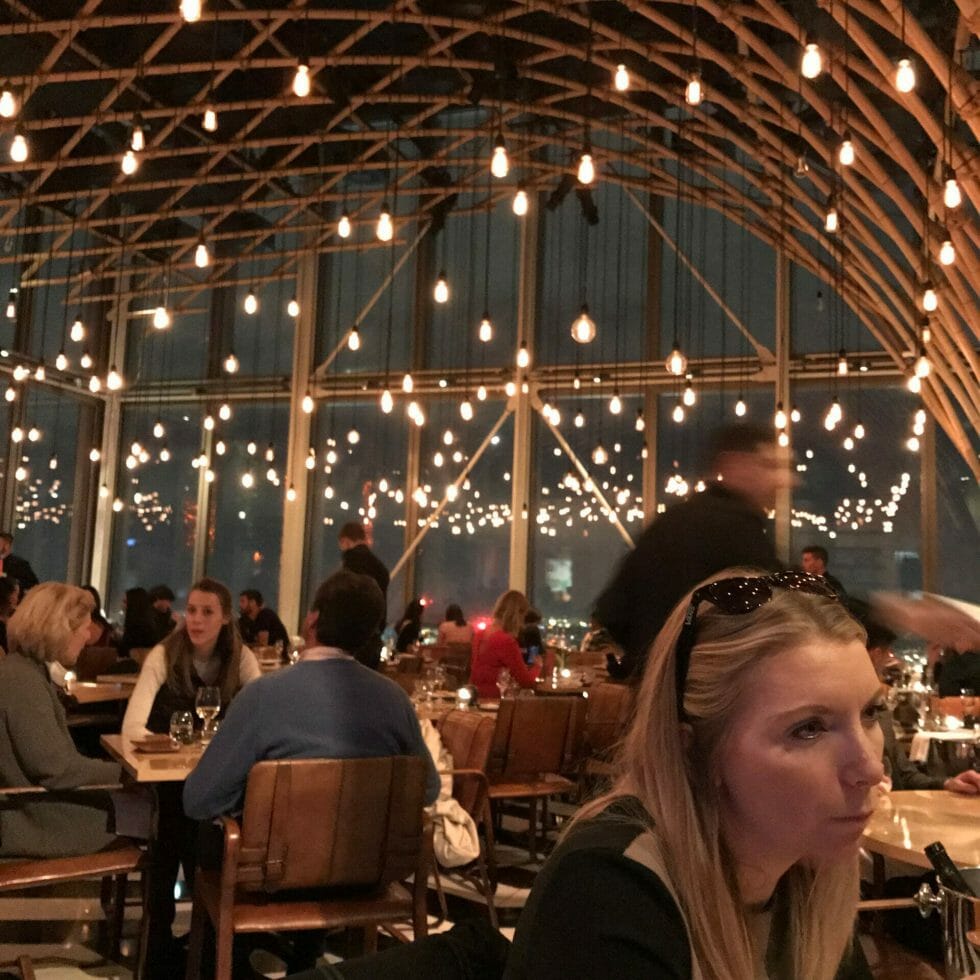 The dining room was a lovely space allowing you see out across London 270 degrees (the kitchen was on the last side). But it did feel a little tight when the tables started filling up. We had a booth at the side of the restaurant, which are obviously the best! 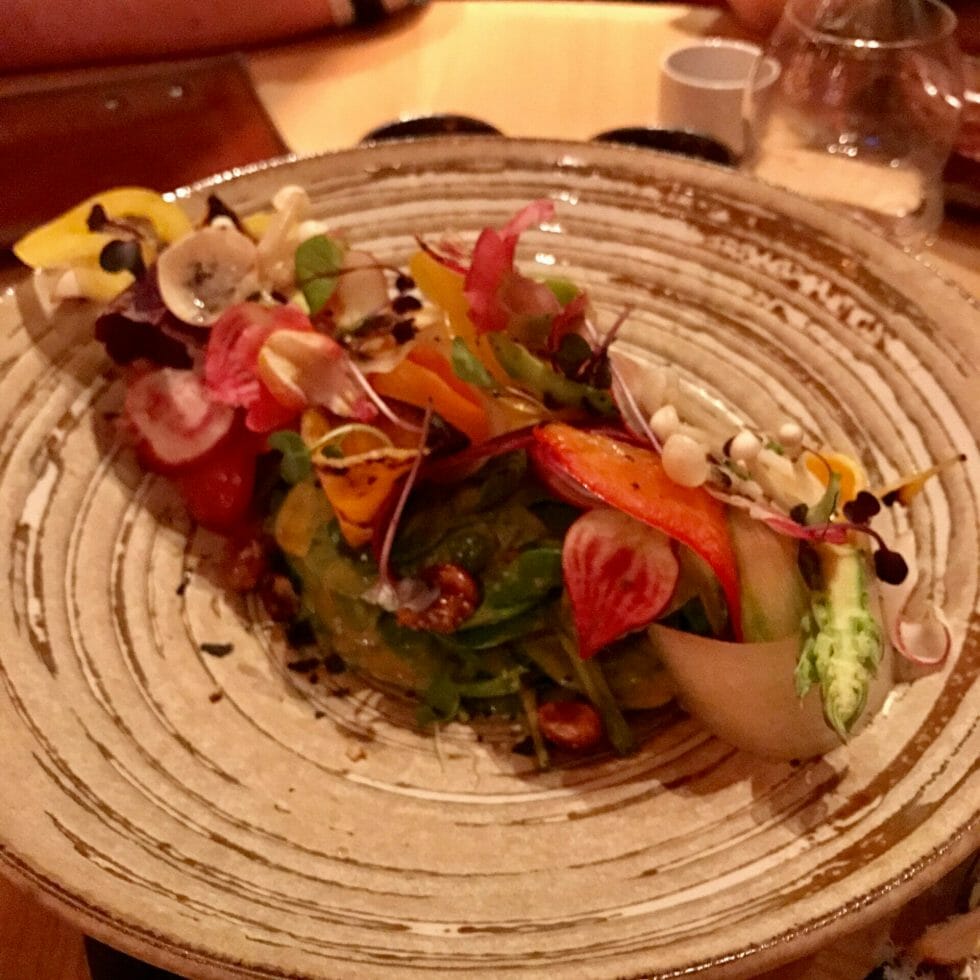 Samba salad – beautifully presented, but you need to mix it all together to get the flavour combinations.

Again this is served with a truffle ponzu dressing, but felt super healthy even with that decadence! 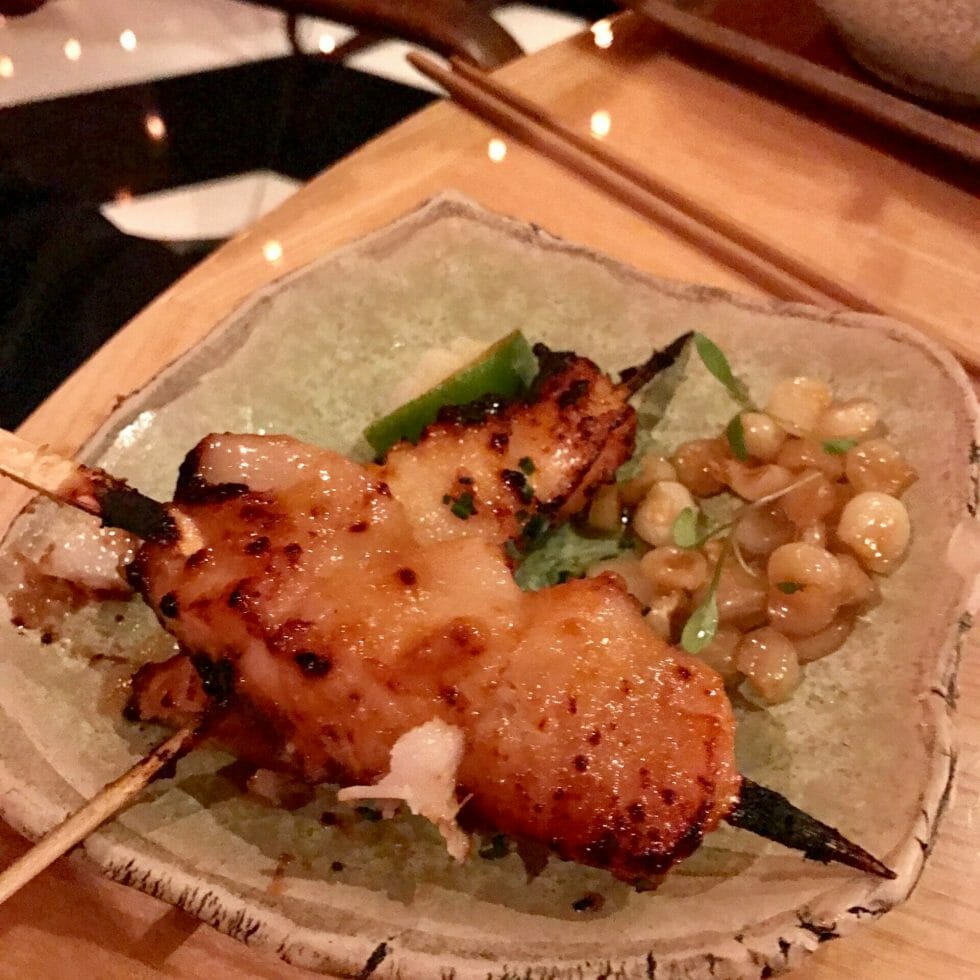 A classic that we had to try, the fish was perfectly cooked and went well with the corn it was served with. Another South American ingredient showcased with the traditional Japanese. 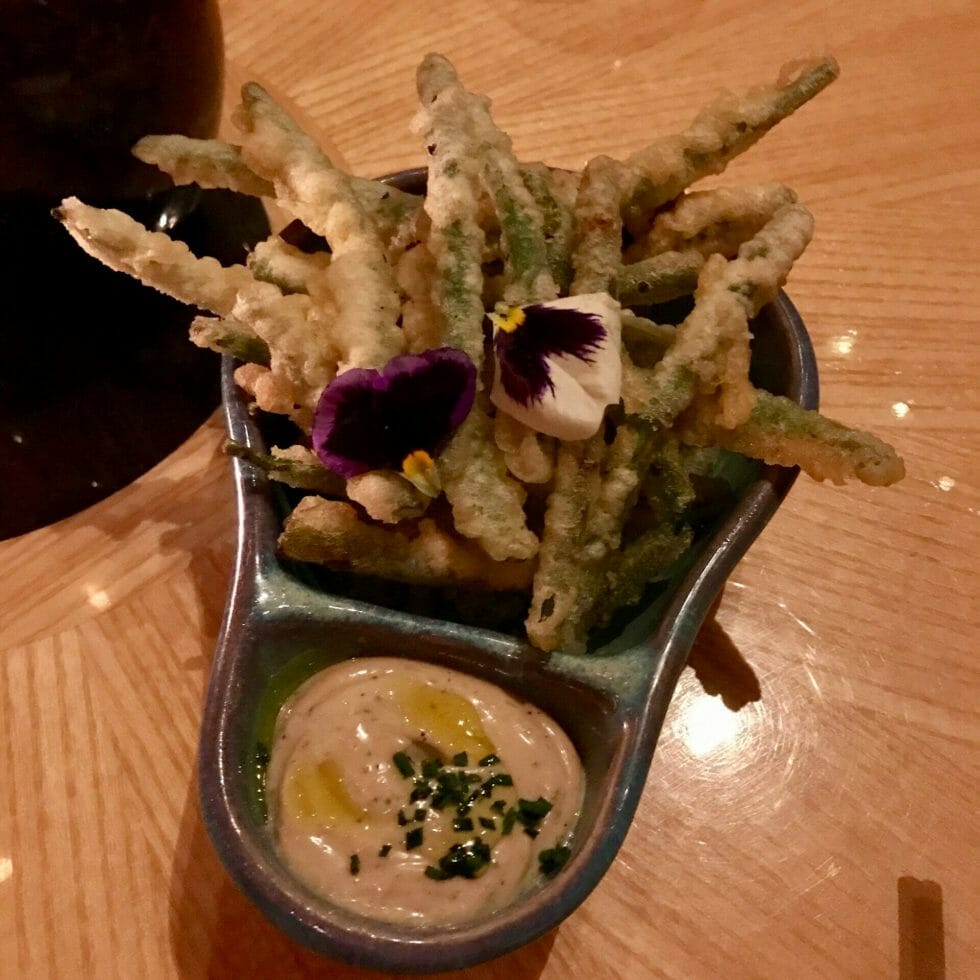 These tempura were great, as long as you like a punch of garlic flavour from the sauce. I loved it! 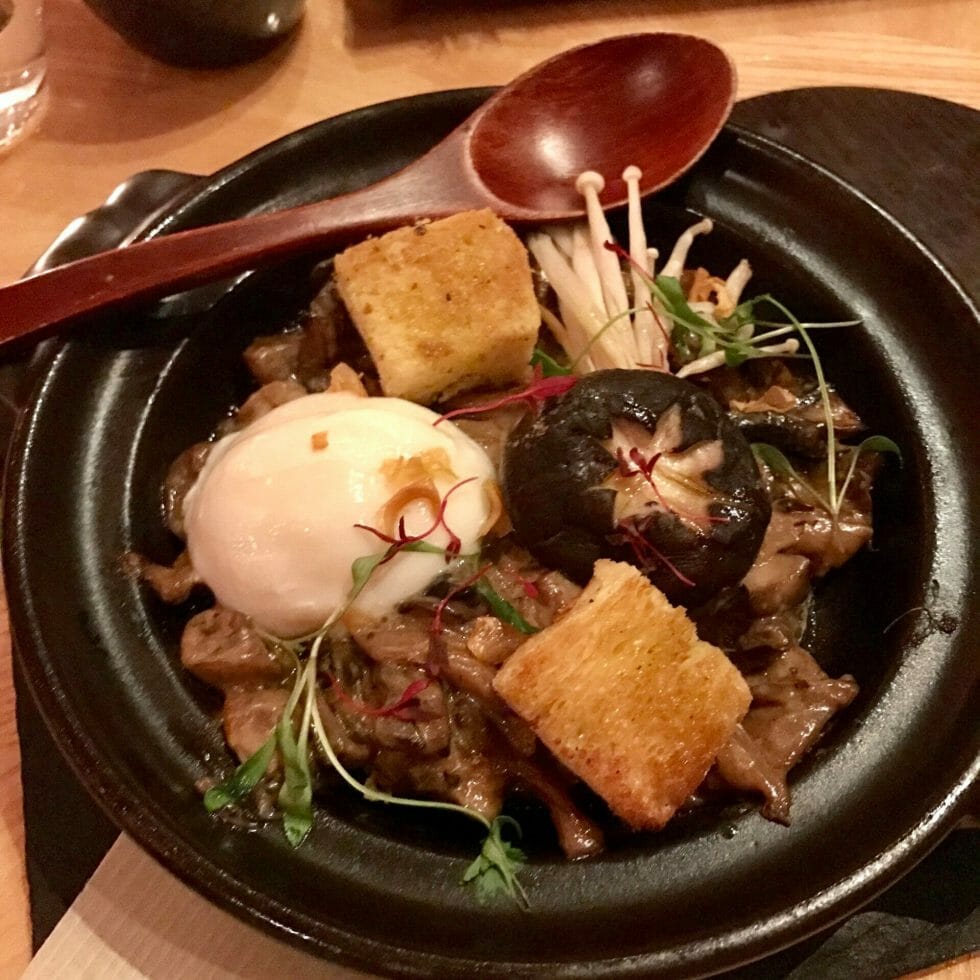 Now for me, this was the star of the show.

Who says the vegetarians don’t get any fun? This mushroom dish was rich, seasonal and succulent. The truffle flavour was present again here, but with the richness of 3 different types of mushroom and the just poached egg to stir in, it was sublime. Definitely my winning dish for a Winter’s dinner! 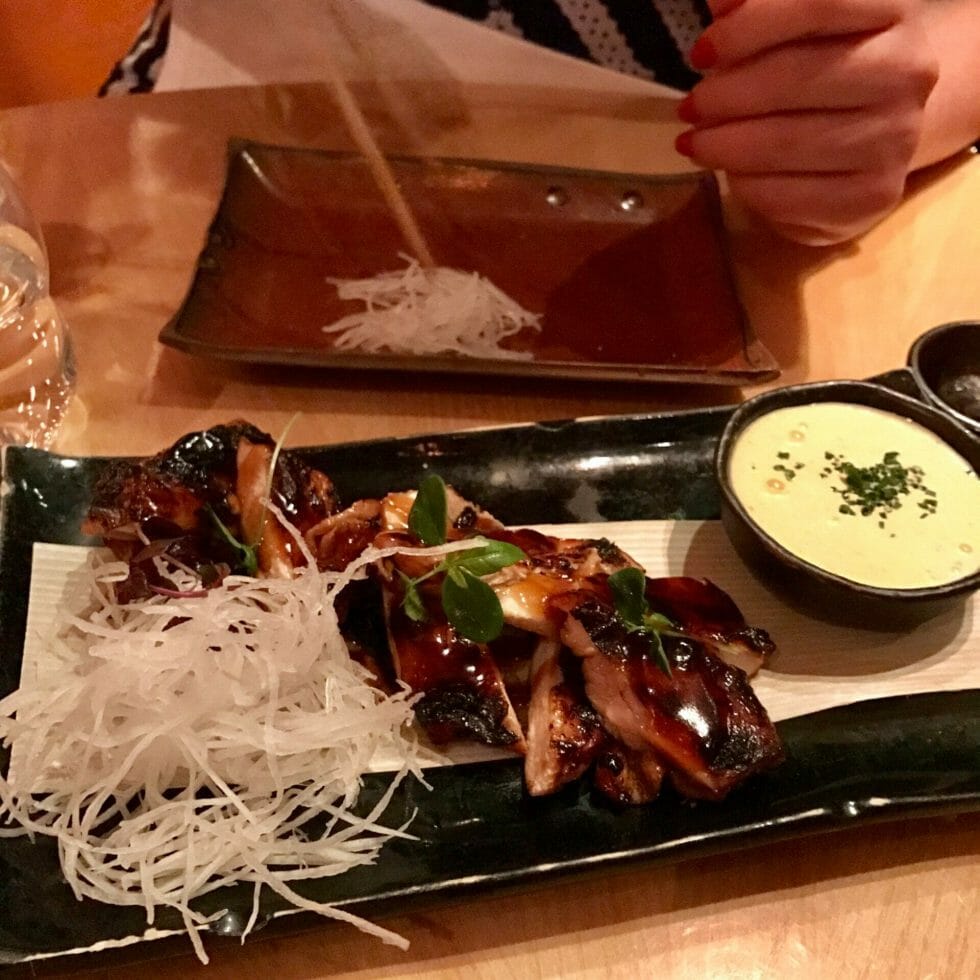 The poussin from the grill.

With a teriyaki glaze and served with the best Japanese mayonnaise – very tasty! 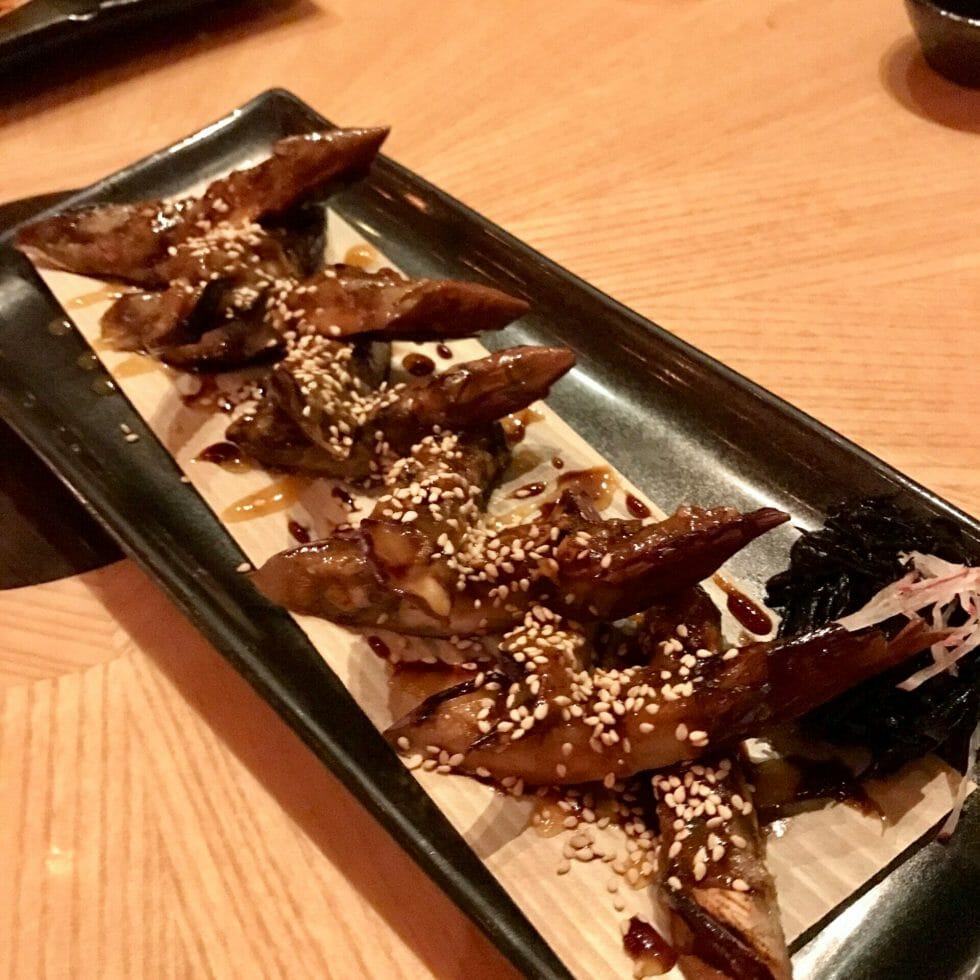 Trying to be healthy we ordered the aubergine too.

You can’t go wrong with grilled aubergine – one of my favourite vegetables – but this was slightly upstaged by the mushrooms.

By now I didn’t need a dessert, but I wanted to try them out…. 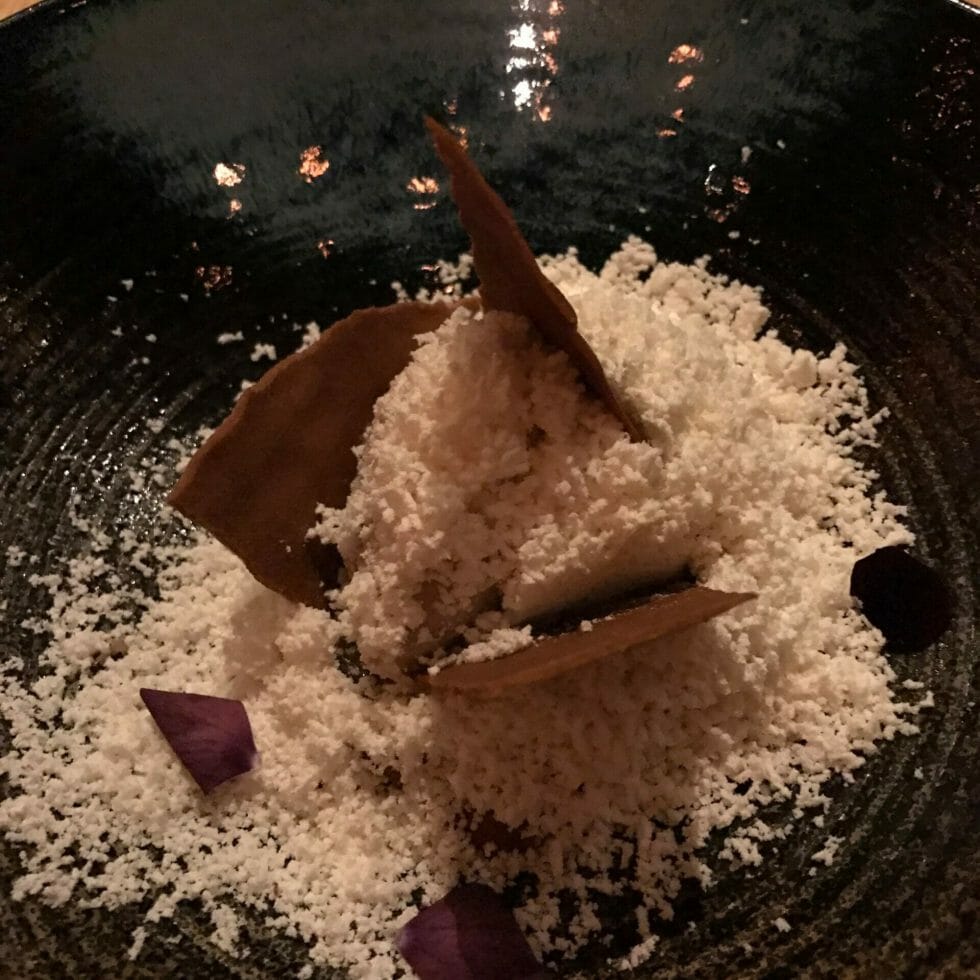 With Love from Rio – with that name I had no idea what this dessert would be!

Turns out that this was valhrhona chocolate ganache (single source from Brazil naturally!), coffee mousse and tonka bean ice cream. The mousse was dehyrdated (it’s the stuff that looks like snow!) 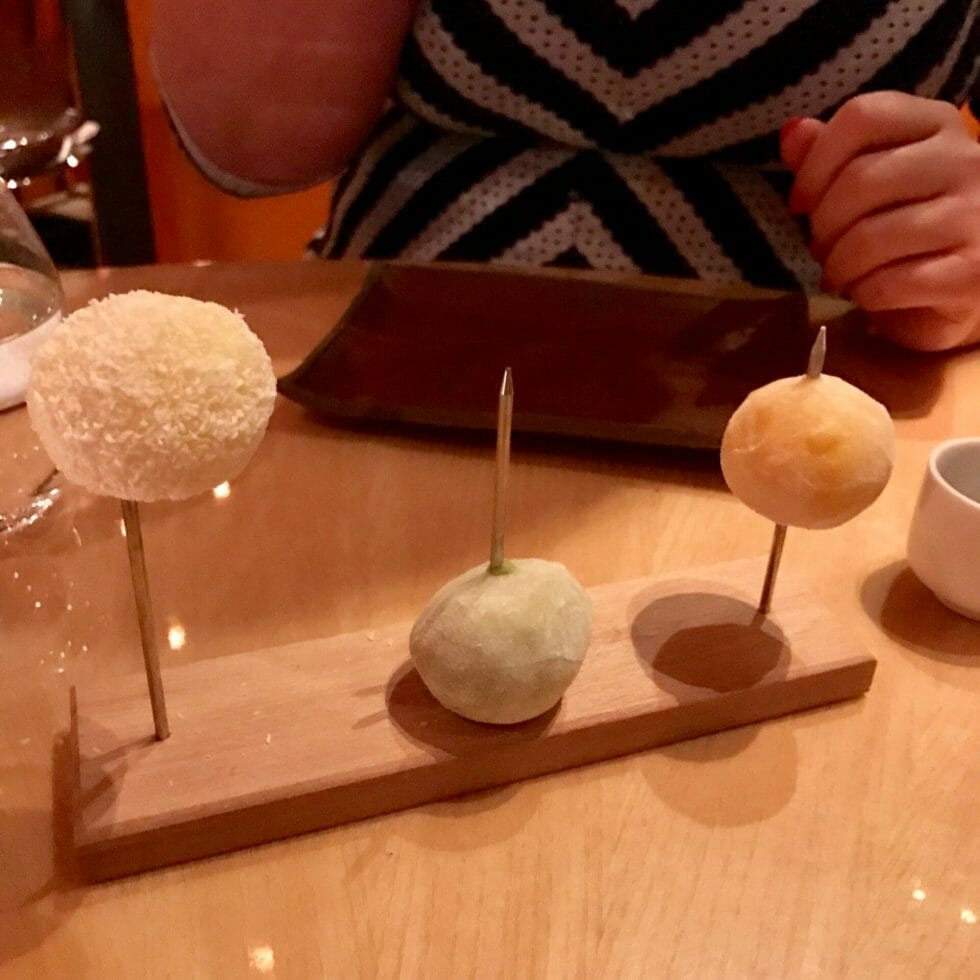 Ice cream mochi are always good! Would you believe that I only tried these for the first time in Dusseldorf of all places?! 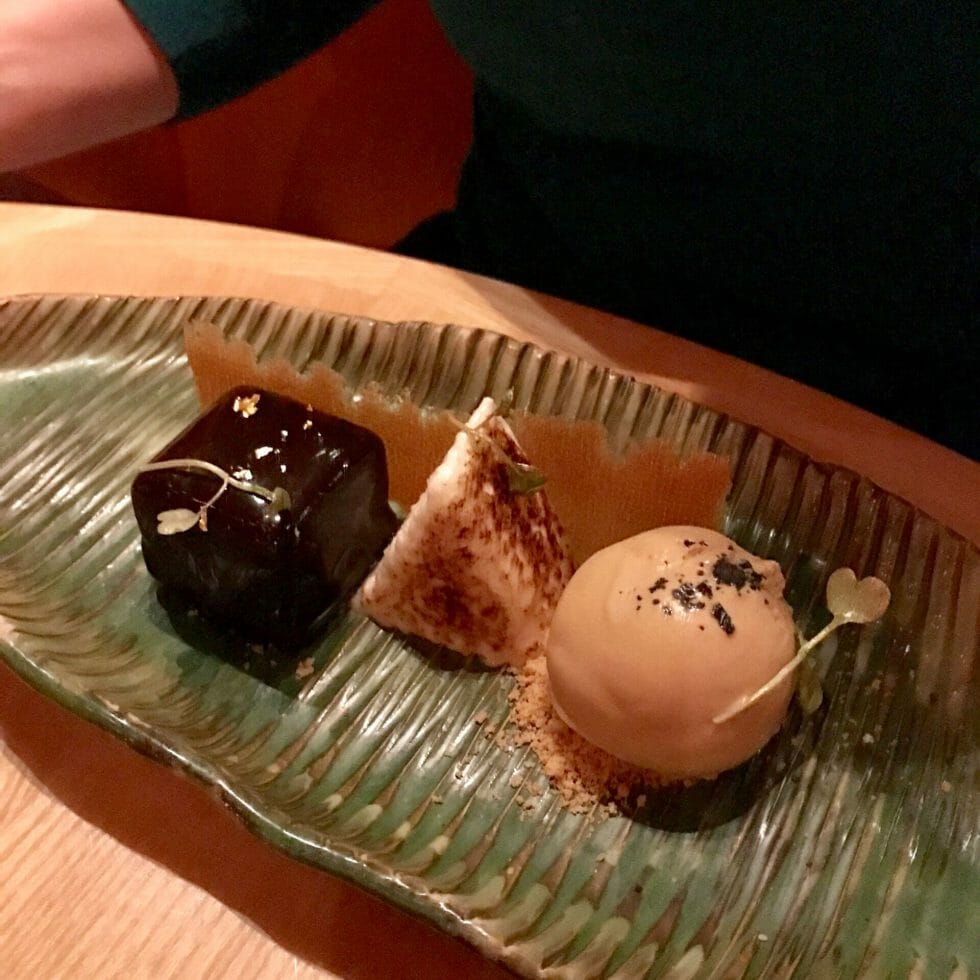 Alfajores – deconstructed obviously, but a great interpretation, my friend adored it.

So what did the girls think? We liked Sushi Samba, however with a mix of budgets we had to be careful what we ordered. Through sharing a selection of dishes we all left feeling full and satisfied. The meal came to about £45 a head and served with some hot sake for £60 a bottle, this was reasonable for a special night out. I do think that the cocktail menu needs some rethinking – so stick to wine or sake with your meal. 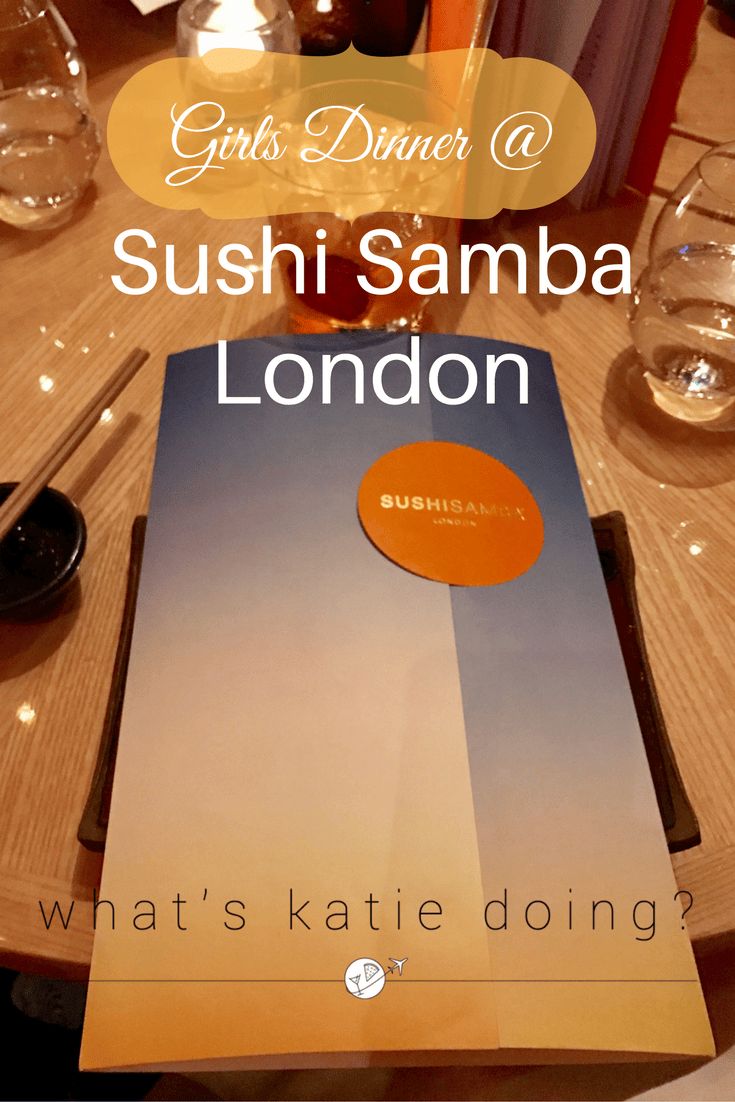 Why not pin me for later?! 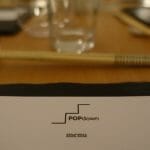 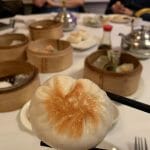 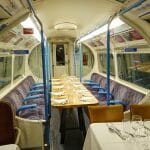 Supper club tube – the only legal way to drink on the tube!