This weekend I had my first couch surfer. Couchsurfing is where you stay with someone – often sleeping on their couch, sometimes they have a spare bed/room. I did this to mixed reviews in the US (what can I say – just be careful if you’re travelling as a single woman..) and wanted to host people when I got back to living in London.
So that’s what I did, and Joke was my first couch surfer!
We met in Camden and after a brief tour around the flat I took Joke to the National Gallery, where my friend Alex was doing a practise for her tour guide training. So another free tour (we’re so spoilt!) where some random tourists joined in as a further test for Alex and then we went for a quick drink.
We were aiming for the rooftop bar at the Trafalgar Hotel – great views over London, but unfortunately with a group of 8 people you need to prebook or the wait was one and half hours!
So instead we went to the very warm Albannach bar next door, no rooftop view 🙁 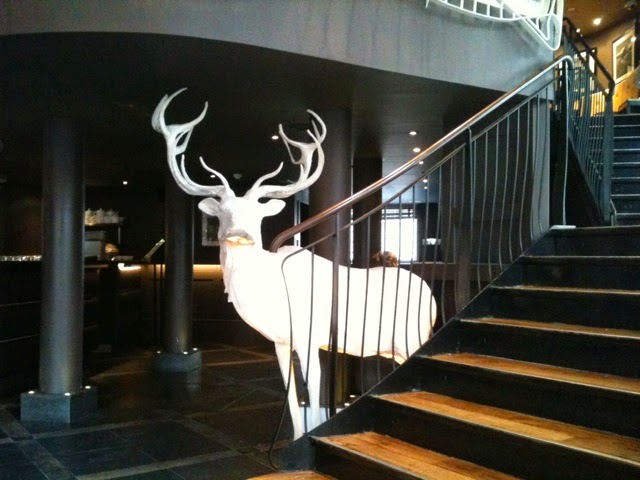 The Scottish theme extends to this welcoming stag 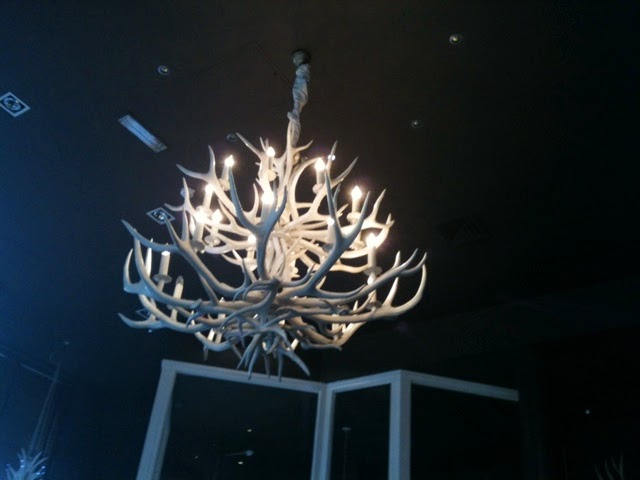 Although this bar is Scottish themed with a large selection of whiskey, they also do a promotion on ‘Secret Wine’. This are the bottles they are running down now that they different wine on the menu, you don’t get to know what the wine is before you buy, but it’s only £15 a bottle!
The bartender assured us that the white wine was a dry white, so we went with that and it turned out to be quite nice: 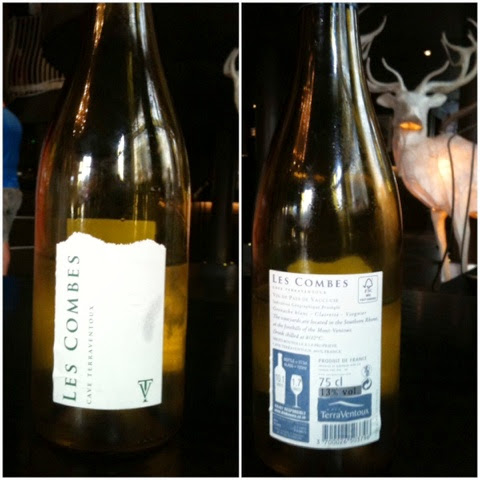 Les Combes – the secret wine with stag photobombing behind

That evening we met up with Catherine’s friends for dinner in Strada on Parkway in Camden. They were going onto the Jazz Cafe for their 80s versus 90s music evening for a bit of a dance, but we didn’t feel up for dancing. Apparently we missed a good night!
On Sunday we did a quick sightseeing tour starting from Camden on the 274 bus. This heads up to Regent’s Park, past the Zoo, down Baker Street, past Selfridges and Marble Arch and finishes at Lancaster Gate on the north side of Hyde Park. Here we jumped off and walked through The Italian Gardens. 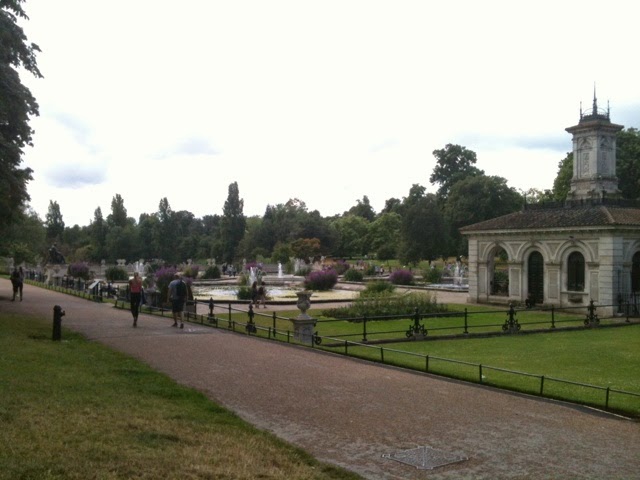 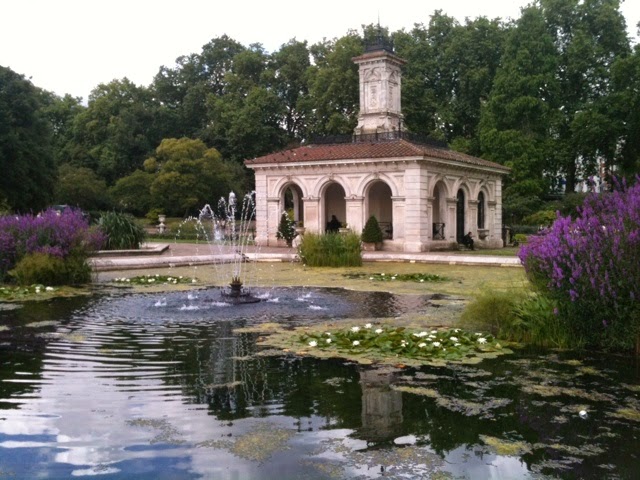 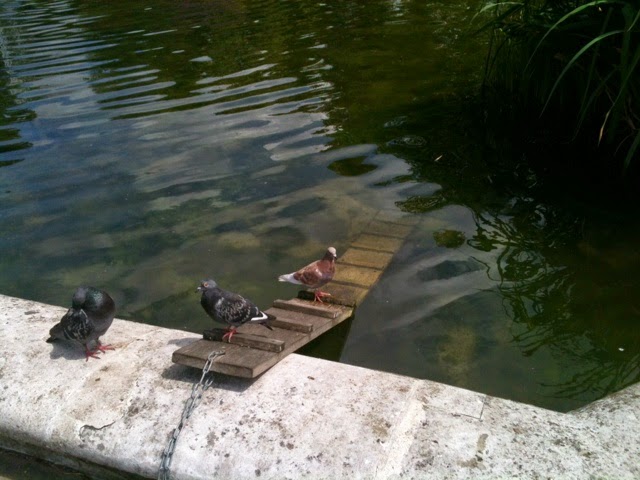 The ponds have little ladders to help the pigeons get to the water to drink!

We then walked along the Long Water to the Serpentine, where there were some people swimming and lots out in boats! 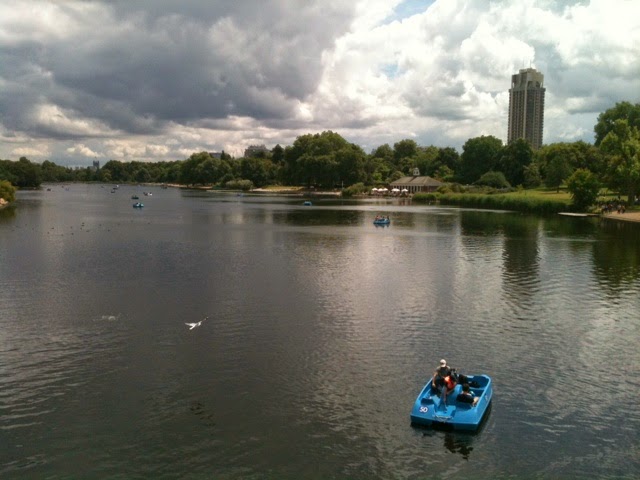 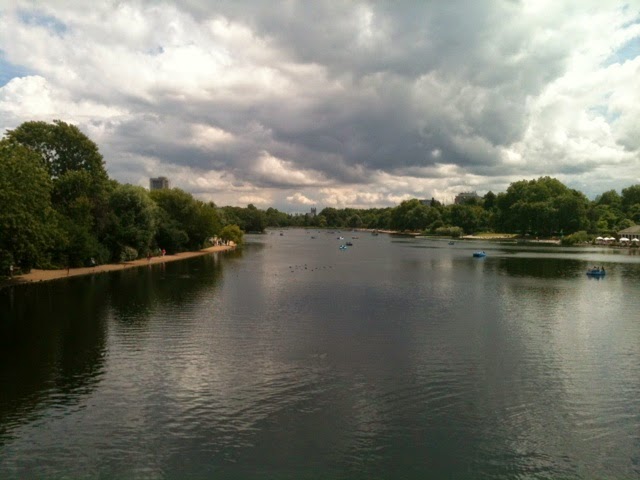 View down the Serpentine with Westminister in the distance at the far end.

We spotted the Albert Memorial shining in the sunlight so went for a closer look: 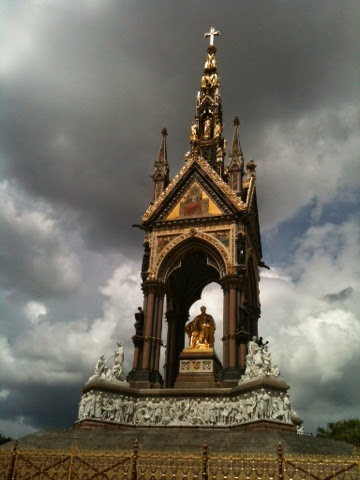 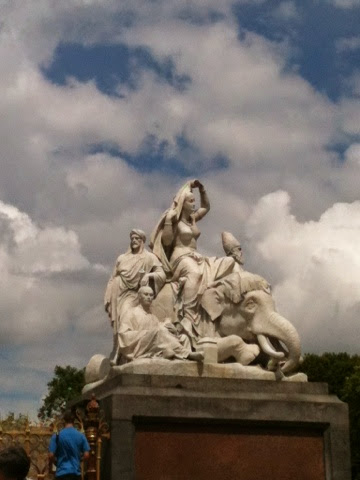 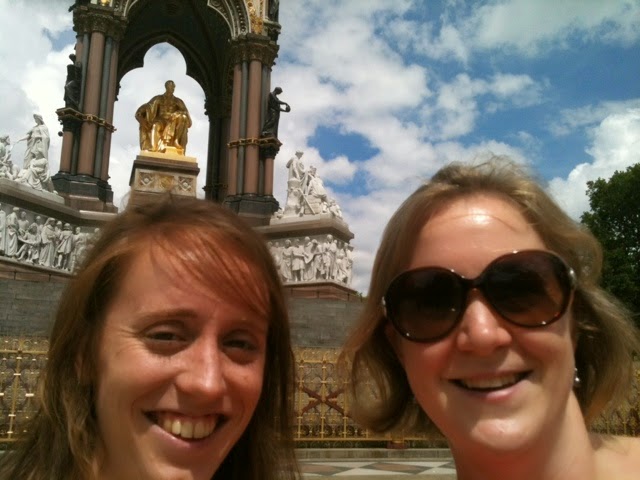 Joke and I get a selfie with Albert 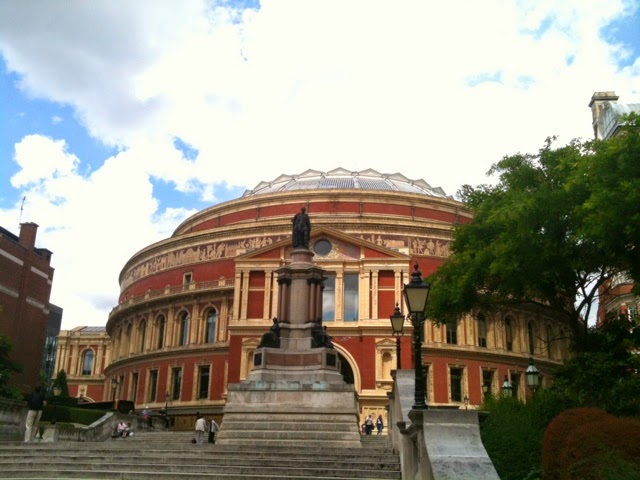 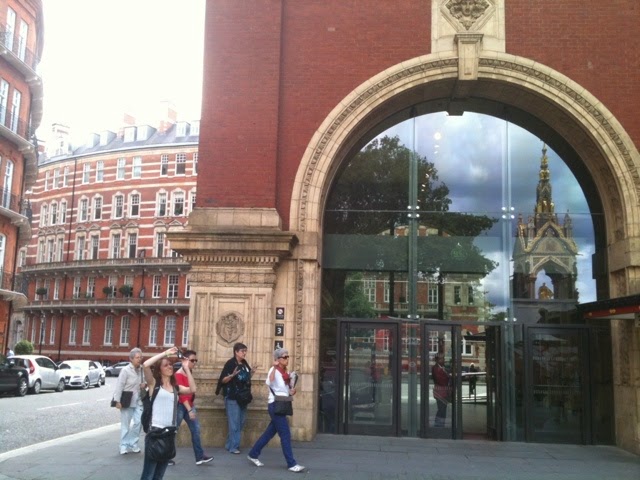 Reflection of the Albert Memorial in the window

And we made it to the V&A museum – I was surprised to find this little splash pool in the garden in the middle of the museum – it was perfect weather for splashing around and loads of families were taking advantage of the good weather to do this. 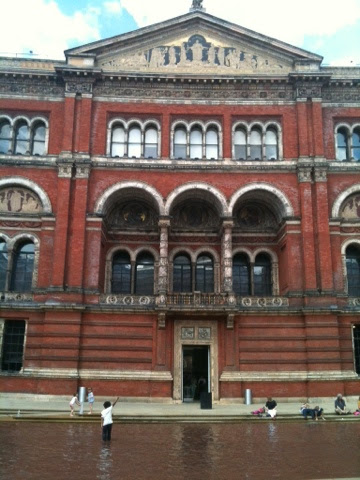 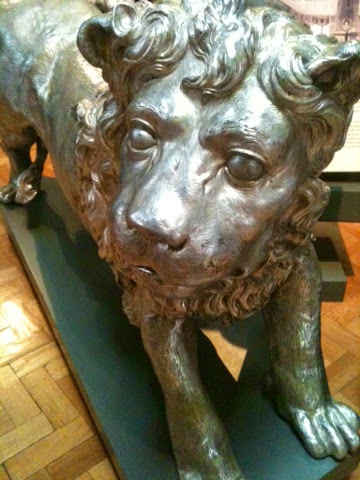 I also spotted this little guy – a reproduction of the lions that sat around the Danish throne!

From the V&A we walked up Brompton road to Wellington Arch, which the Horse Guards ride through on parade. 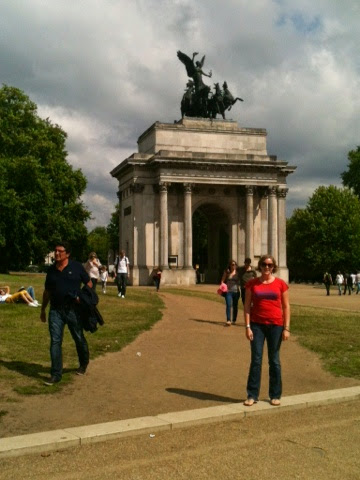 In front of the arch – you can actually go into the arch, English Heritage have exhibitions here, it’s currently closed til the 16th July whilst they put a new exhibition up. 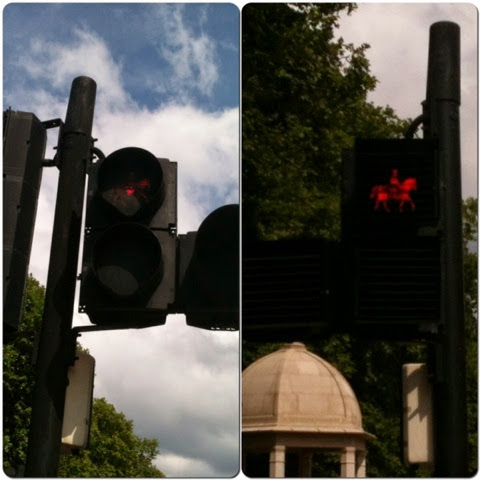 From Wellington arch we headed to Buckingham Palace where the police officers on the gate were obliging the tourists with photos! 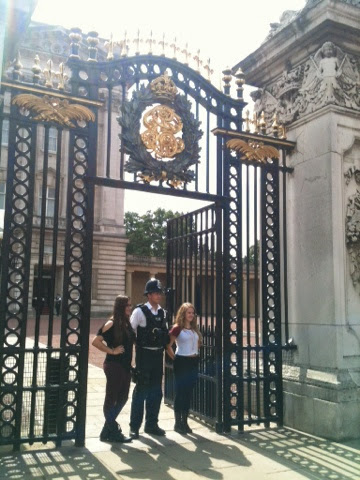 Then it was a short walk up the Mall to Horse Guards Parade – where I volunteered in the London 2012 Olympics at the beach volleyball. 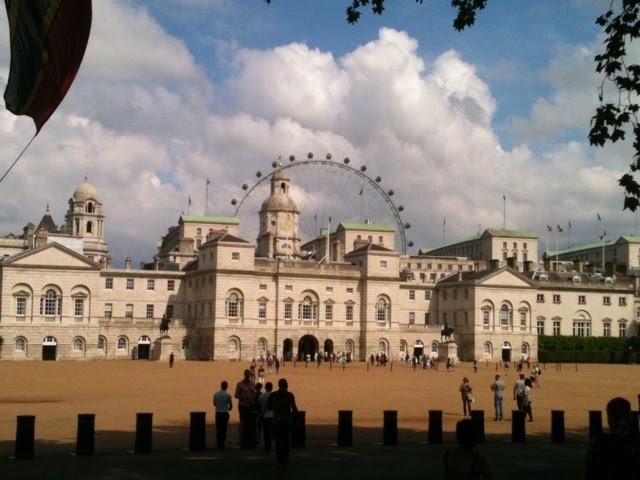 Looks a bit different without the huge temporary stadium!

Finally I headed to Trafalgar Square to get the 29 bus back to Camden to start getting ready for clothes swap that evening and Joke headed to check out one of my favourite areas in London, the Southbank. 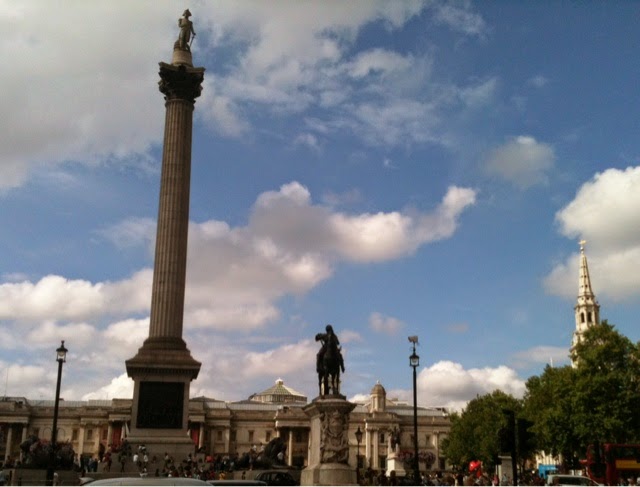 Nelson sitting on his column! 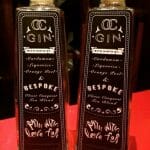 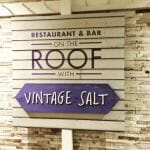 Up on the Roof @ Vintage Salt 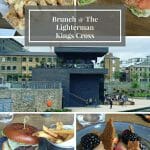 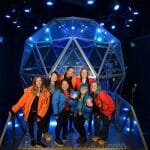 The Crystal Maze is back and better than ever!