As you may already know my family and I recently went on holiday in Malta. We stayed just outside the Valletta city walls at the Phonenica Hotel. I’ve already posted about some of the best places to eat and drink – but we did slightly more than just eat and drink!
Here is what we did – all in walking distance in the old town:

The first stop we visited – great to get some context on the pre-history of Malta from Neolithic period up to the Phoenician period (5000-400BC).
There are several rooms, each for a different time periods and they are still developing more rooms for later periods (Roman etc). They have a wide collection of archaeological artefacts and some educational displays on what they think it all relates to!
The museum itself is in a lovely large building on Republis Street with high ceilings and beautiful architectural features such as the wooden beamed ceiling and richly painted walls of the grand salon. 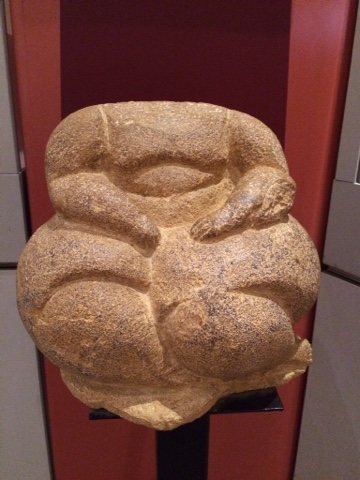 The Venus of Malta from Hagar Qim, these curved female figures are likely to be depictions of goddesses 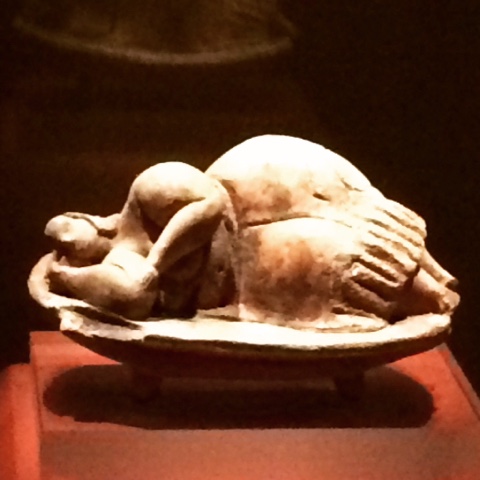 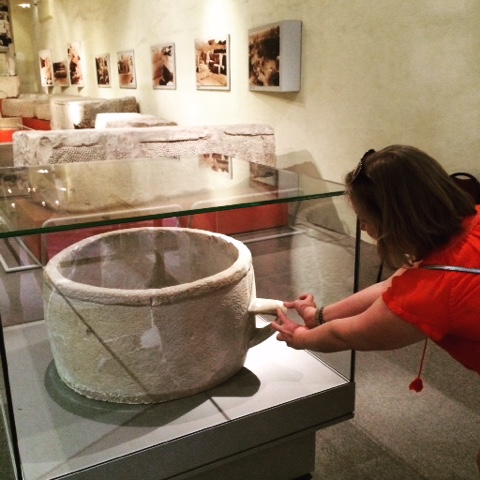 The Malta Experience is an audio visual show with individual headphones so you get the commentary in your own language.
This looks at the more modern history as well as the prehistoric bits already seen in the Museum of Archaelology. It’s amazing to see how many times Malta has been invaded! The island is right in the middle of the trade routes through the Mediterranean and so whoever holds it has a strategic advantage.
This was a good option for the whole family on an overcast day – Dad enjoyed the history, particularly the war stories and baby Dylan slept through! 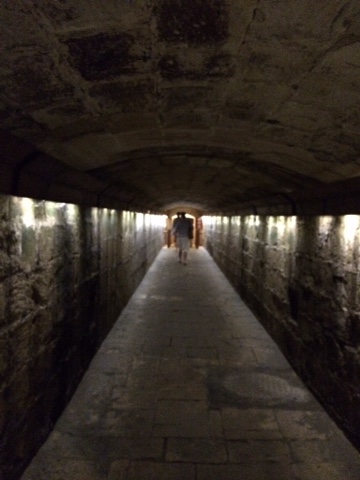 Through the tunnel to the theatre!

Along the road from the Malta Experience is the Seige Bell war memorial. 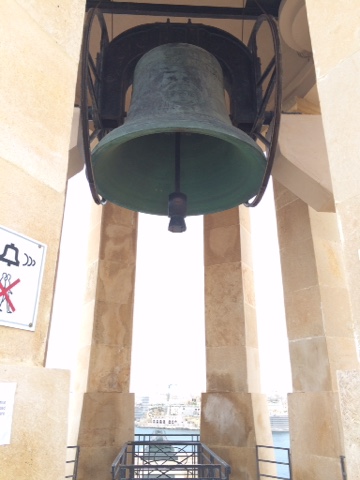 Don’t stand here when it tolls! 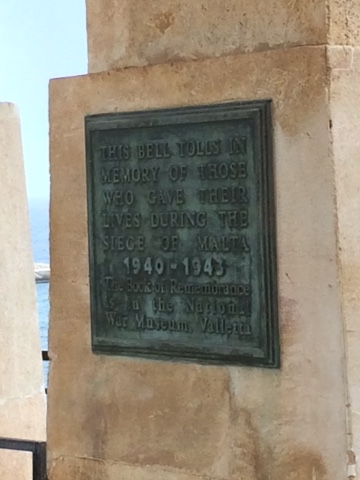 Fort St Elmo is on the tip of the Valletta peninsular – strategically placed to control access to the natural Grand Harbour, which makes Valletta so desirable.
The fort is star shaped and built by the the Knights Hospitaller and was used to protect the peninsula from Ottoman attack in1565 (the great Seige). The siege lasted 28 days, but resulted in significantly more Ottoman deaths and bought time for the completion of two other forts and for reinforcements to arrive from Spain. 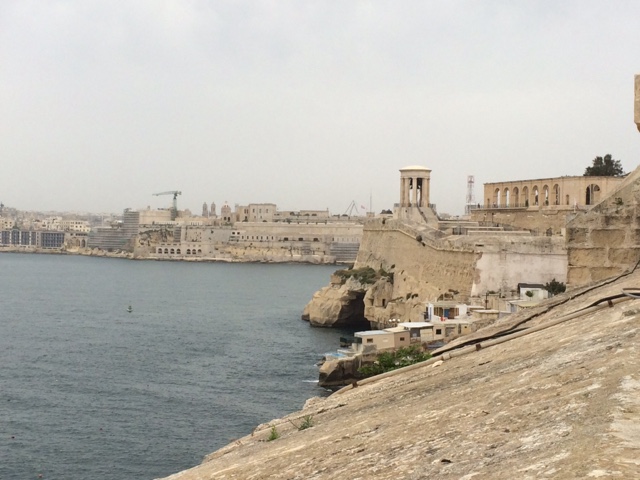 View back from Fort St Elmo to the memorial bell 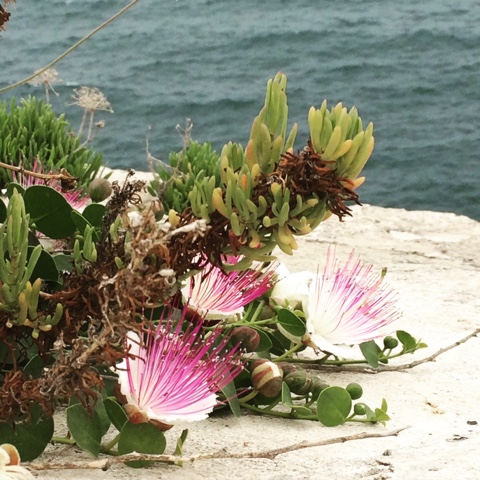 It’s a lot of stone, but nature finds a way to pretty it up 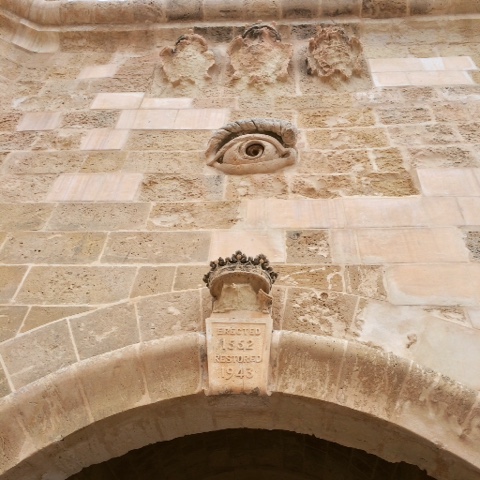 The evil eye protecting over one of the internal gate.

The waterfront is on the grand harbour right by the quayside where the cruise ships dock. As such it’s a little touristy! There are lots of restaurants and some bars with happy hours and the usual tourist / duty free shops. 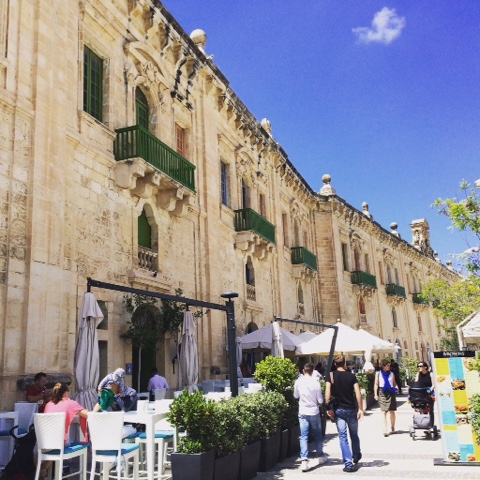 A gorgeous view of the preserved water front architecture – it’s actually just the facade left, with a car park behind!
To get to the Waterfront you can either walk down the road or take the stairs or elevator from the Upper Barrakka gardens. We chose to walk down and then get the elevator back up to the gardens (easier with the pram!) 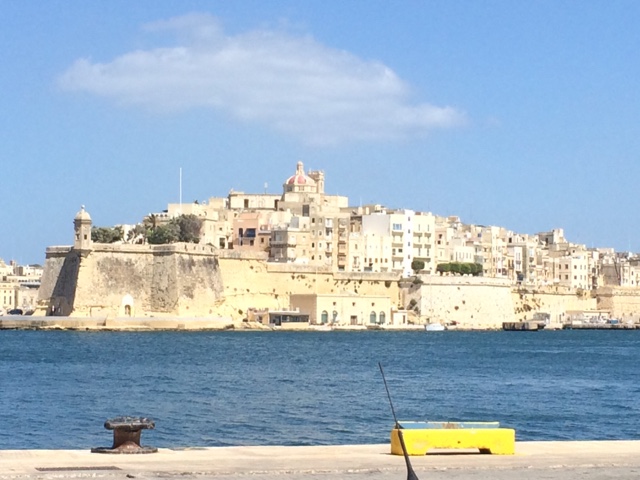 View across the harbour from the quayside – I’ve cropped out the huge German cruise ship! 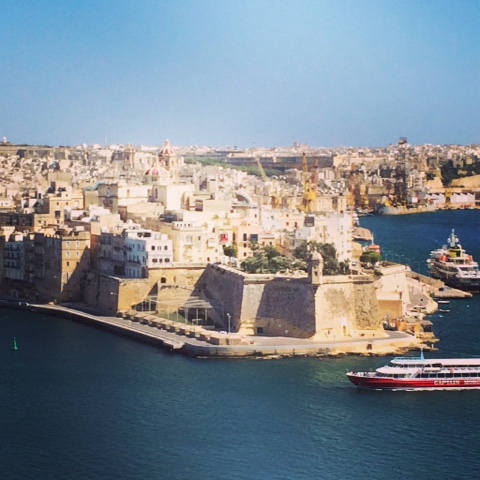 Same view looking down from the Upper Barrakka gardens – it’s quite a way up!!

St John’s is the cathedral in Valletta, but it’s not the seat of the diocese – it shares that honour with the original Cathedral in Malta – St Paul’s in Mdina (thanks Becky for that little known fact, you won, wiki lost!)
The cathedral was built by the Knights Hospitaller after the Great Seige and is stark on the outside. The interior is a complete contrast, so richly decorated! 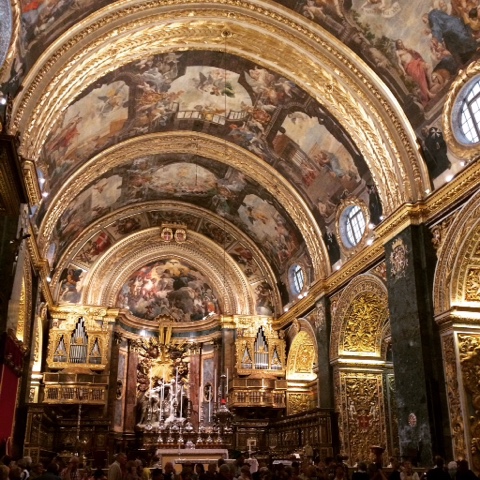 View down the nave – so much gold gilt! 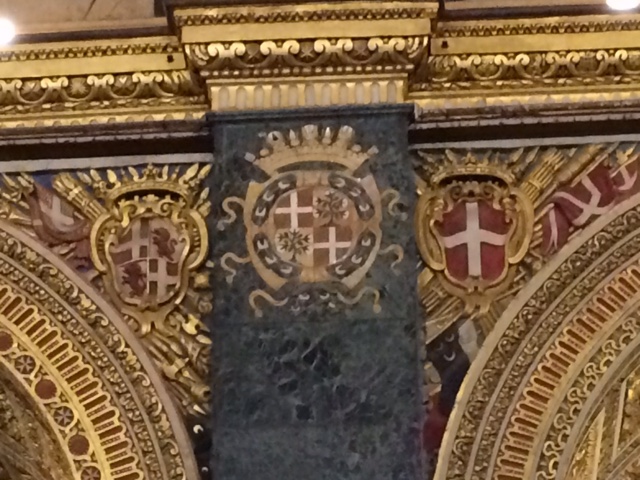 The detailing is stunning – a prime example of high Baroque architecture, designed by Matria Preti 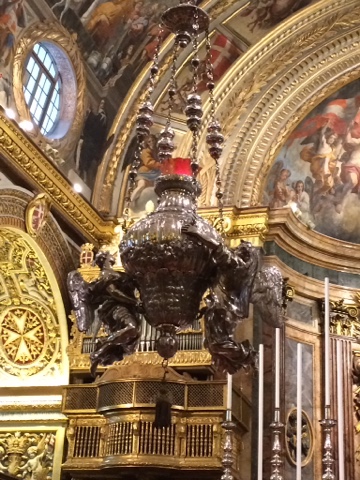 Incense burner in front of the main altar 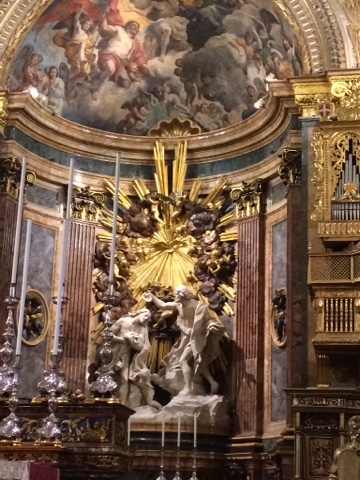 The decoration is supplemented with sculptures and lots of art – the most famous is The Beheading of St John by Caravaggio. The museum has an audio guide that tells you lots (too much?!) about the cathedral – but I appreciated the details around the paintings.

There you have it 5 things to do in Valletta old town!

Other places that are worth a day trip include the Aquarium – with a decent restaurant, a playground and only a short bus trip away – and Mdina, an old walled city where the other Co-Cathedral sits. 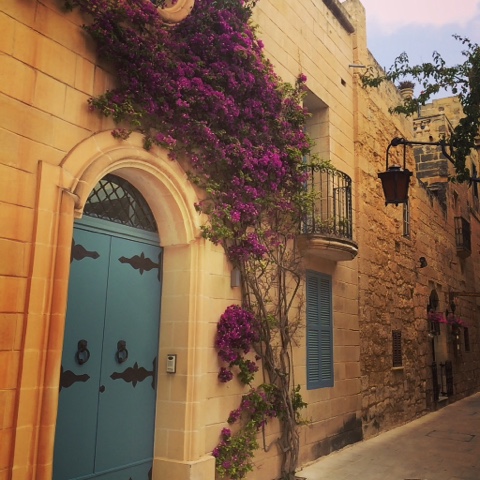 Oh and it’s very photogenic!! For more great spots to look at the unique architecture in Malta, check out this post from Erika’s Travels on Malta’s Beautiful Fortified Cities. 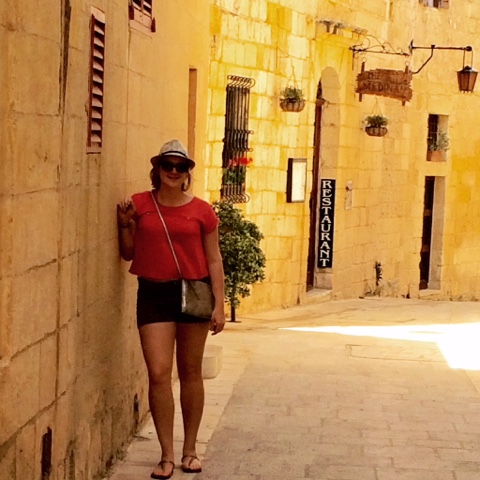 Don’t mind me – I’m just propping up this wall! (You will have seen these already if you follow me on Instagram @whatskatiedoing!) 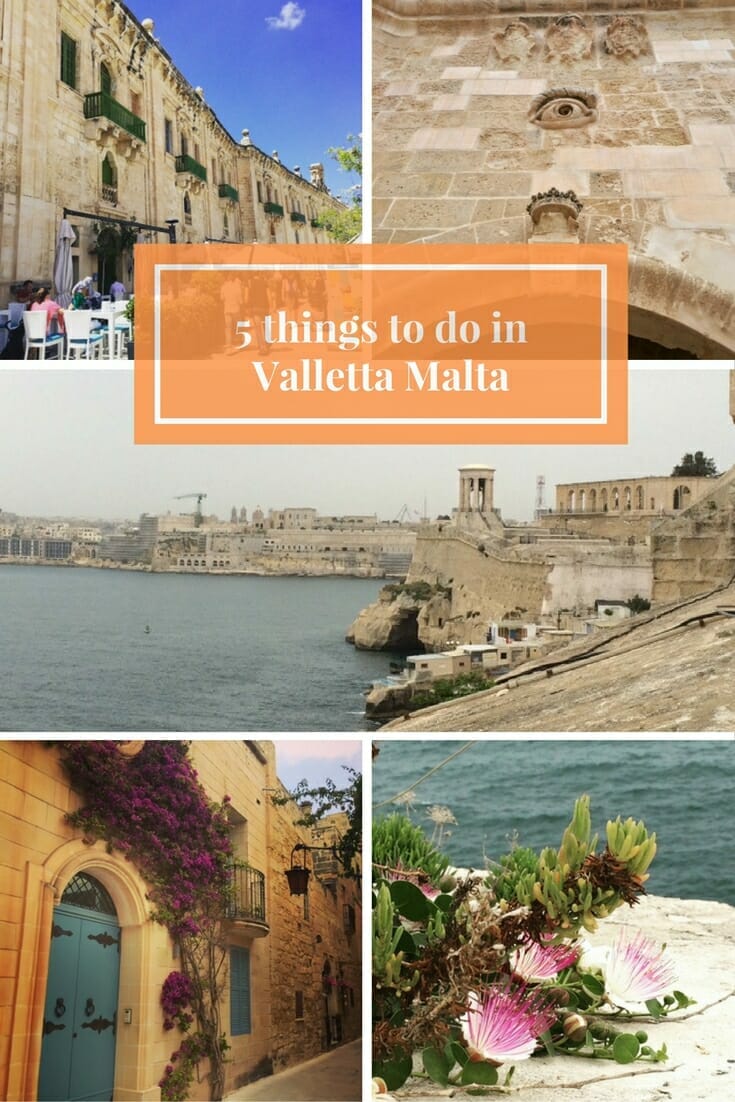 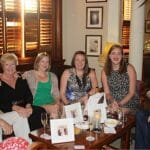 Where to eat in Valletta 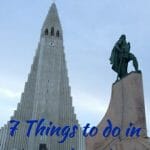 Iceland: 7 Things to do in Reykjavik Top Three in Sardinia 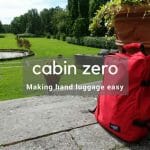