As part of my recent trip in Northern India, we had the chance to add an optional extra: Hot air ballooning. The girls from my group were all up for waking pre-dawn for the opportunity to see the sunrise from the sky. So we did.

Read on to see what the experience was like: 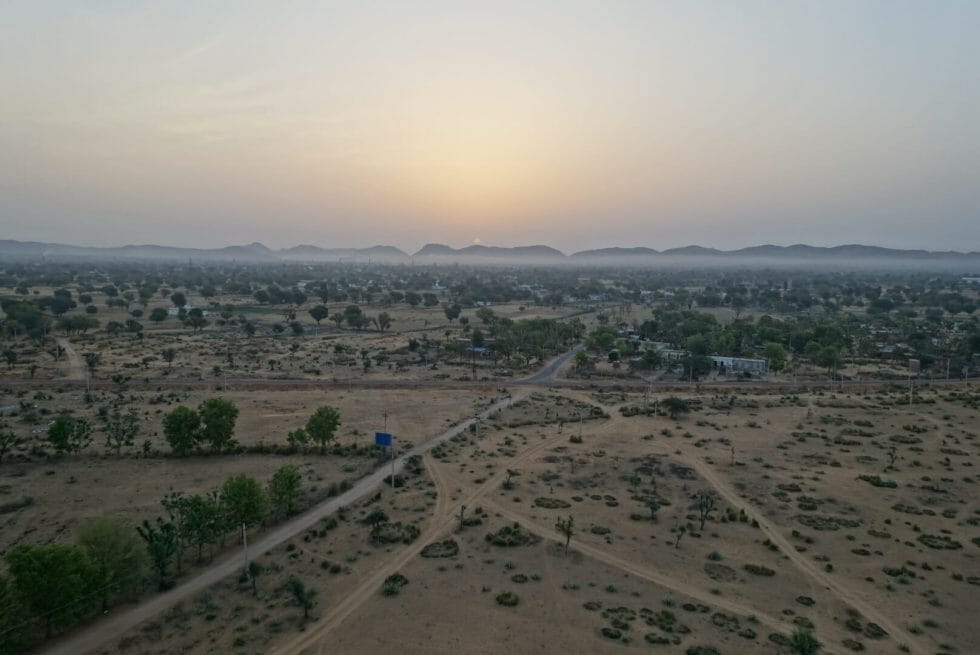 The sun rising over the Aravalli hills

If at first you don’t succeed…

We were meant to do our hot air balloon ride from our hotel in Jaipur. However we had noticed that the wind got up when the sun went down. So it turned out that we couldn’t go the first day. The following evening we were staying not too far from Jaipur at the Alila Fort Bishangarh, so we had the opportunity to try again. For some more ideas of what to do in Jaipur and surrounding Rajasthan check out this Rajasthan itinerary.

Getting up at 4:30am was becoming to be a habit on this trip…

Note that you get a fully refundable ticket, so if you can’t fit the ride in due to weather, you will at least get your money back. For Kirsty, this was her 4th time trying to get off the ground, so she really wanted to try the next day. 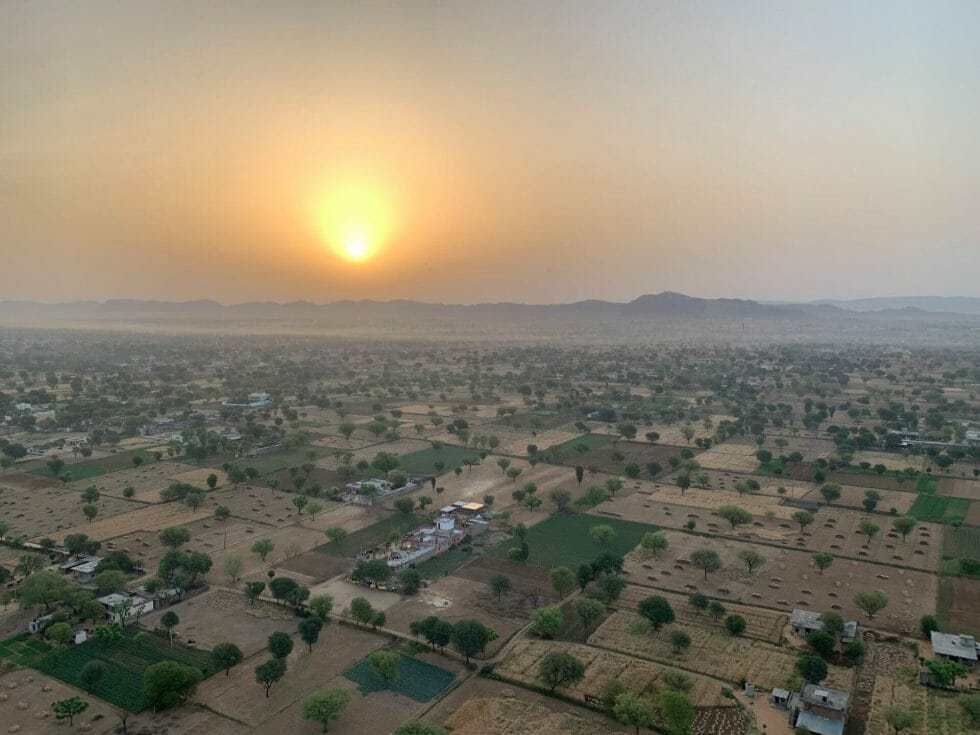 Read more about my experiences on group tours: The 7 types of roommates you might get on your group tour

What’s the deal for a hot air balloon ride?

The hot air balloon company, Sky Waltz, pick you up from your hotel at an early hour pre-dawn. They then take you in a mini-bus to where the balloons are launching in a field outside of Jaipur. For some unknown reason we ended up getting there a bit late, so didn’t get to participate in hot drinks and snacks whilst they inflated the balloon. As our balloon was already mostly inflated when we arrived, we jumped into the basket with the other people flying that morning. 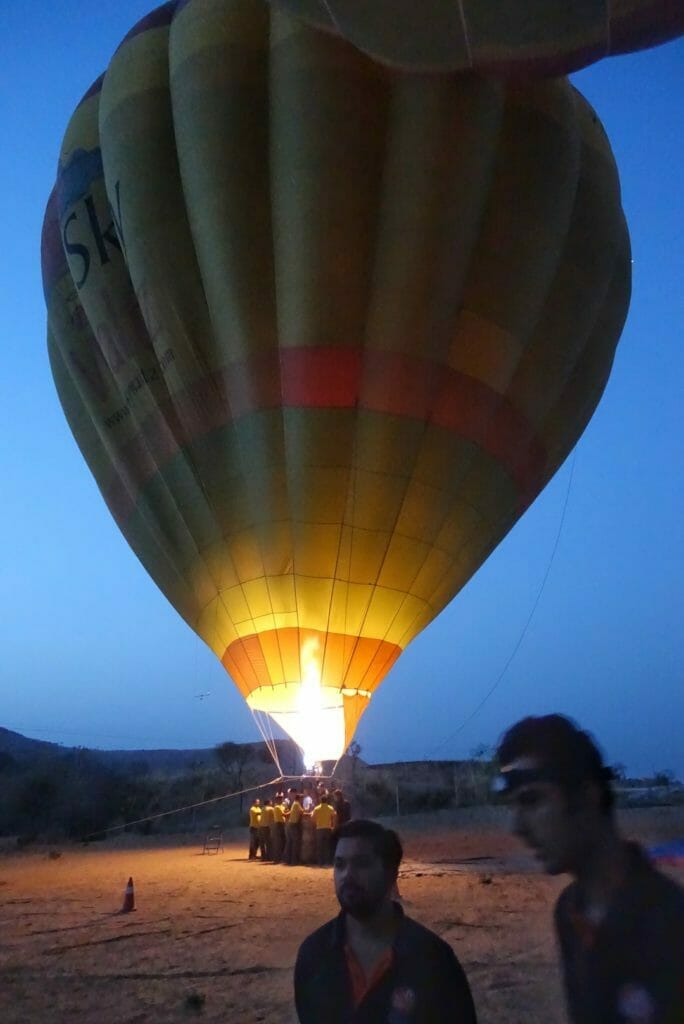 Turn the sound on to hear the noise the burners make.

We got to see the local people sleeping on the roofs of their houses (rudely awakened by either the balloon or their animals going mad as it freaked them out). 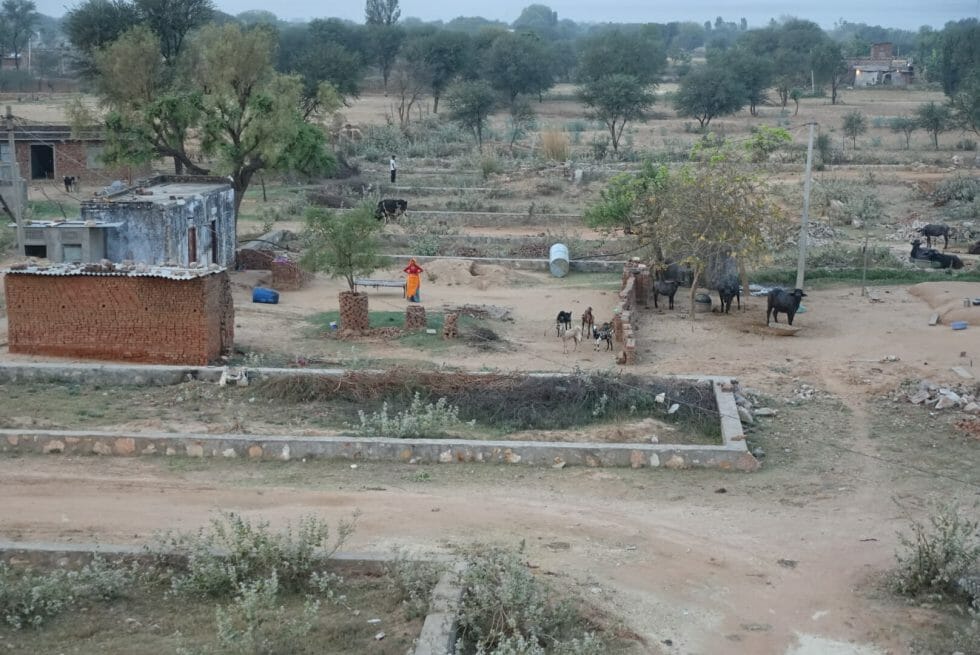 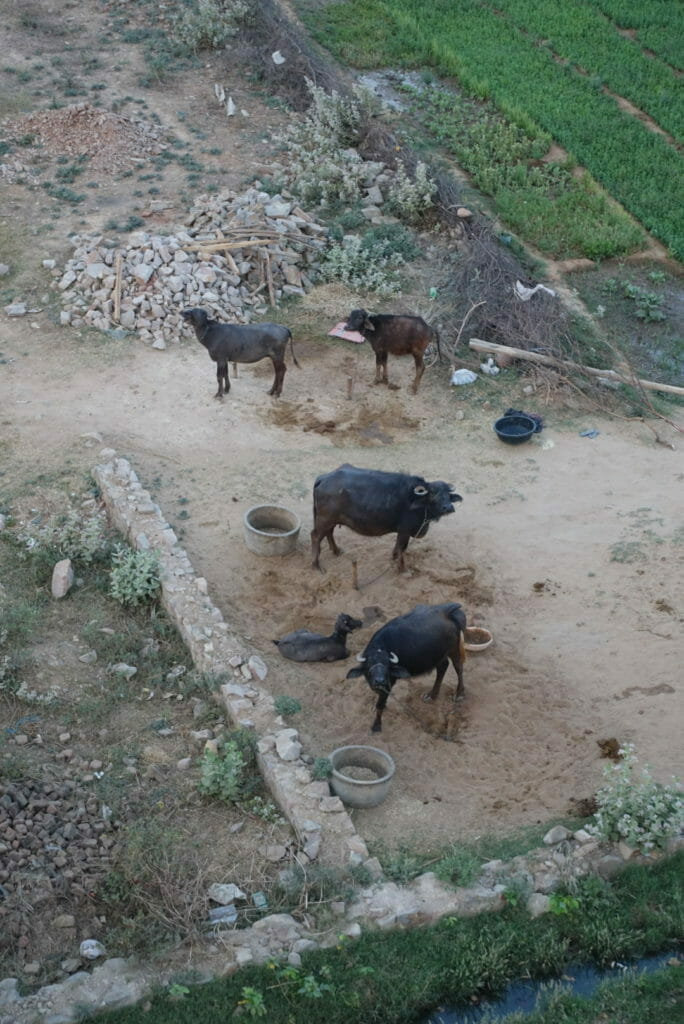 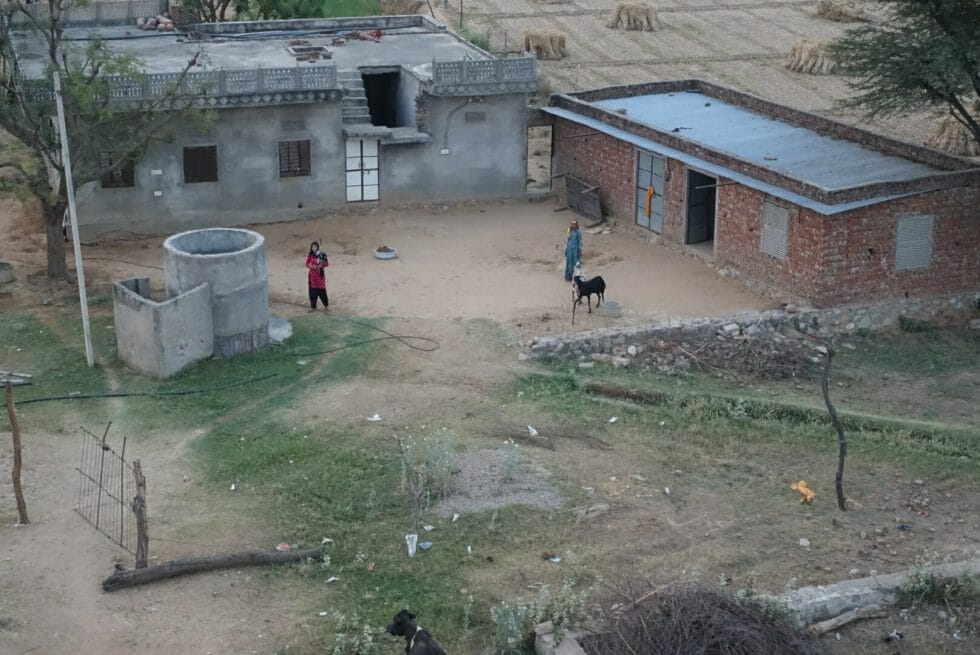 The local people stopped to stare and wave at us

Local industry included the brick works that run 24/7. At one stage I thought we were going to hit a tower, we were that close! 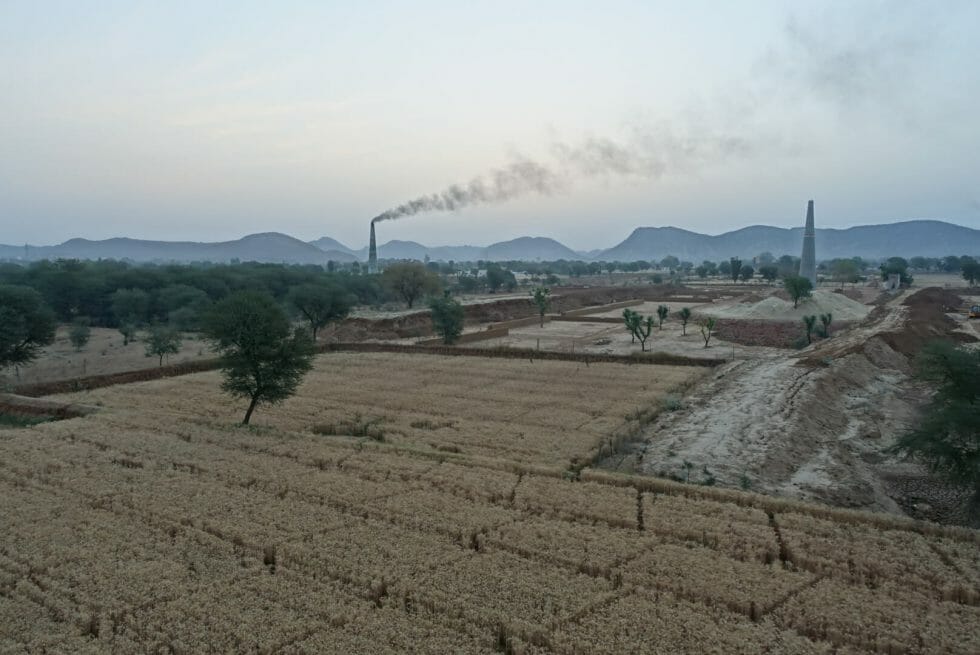 Fields of wheat and brick kilns

So close to the kiln chimneys!

We also got to see people harvesting the wheat crops. Whilst Punjab is known as the bread basket of India, this area of Rajasthan still produces a lot of wheat. 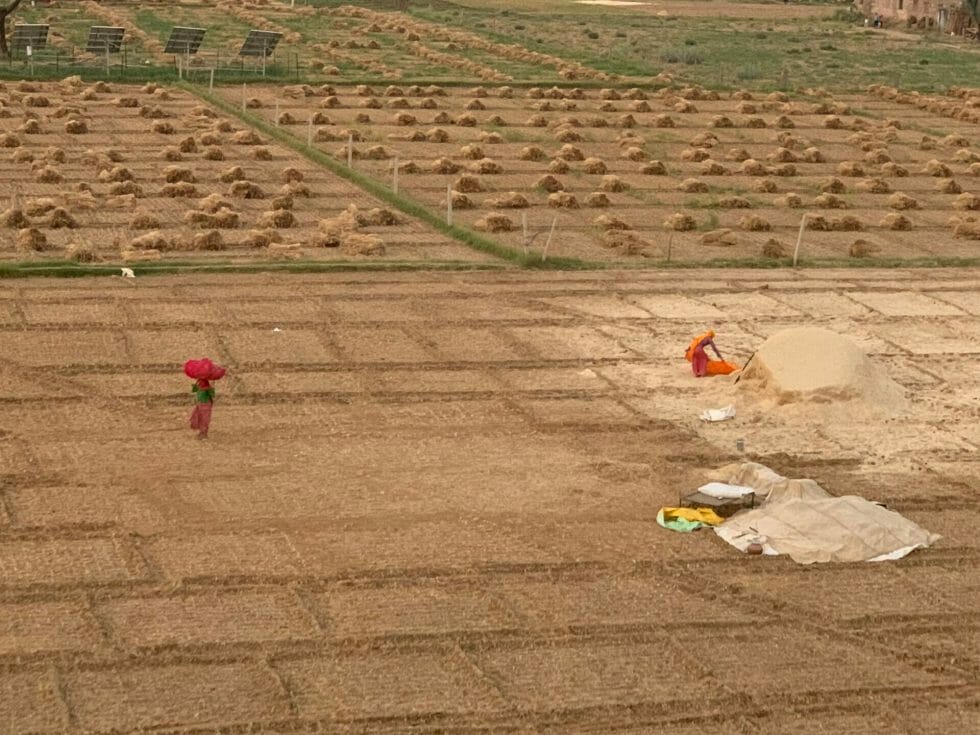 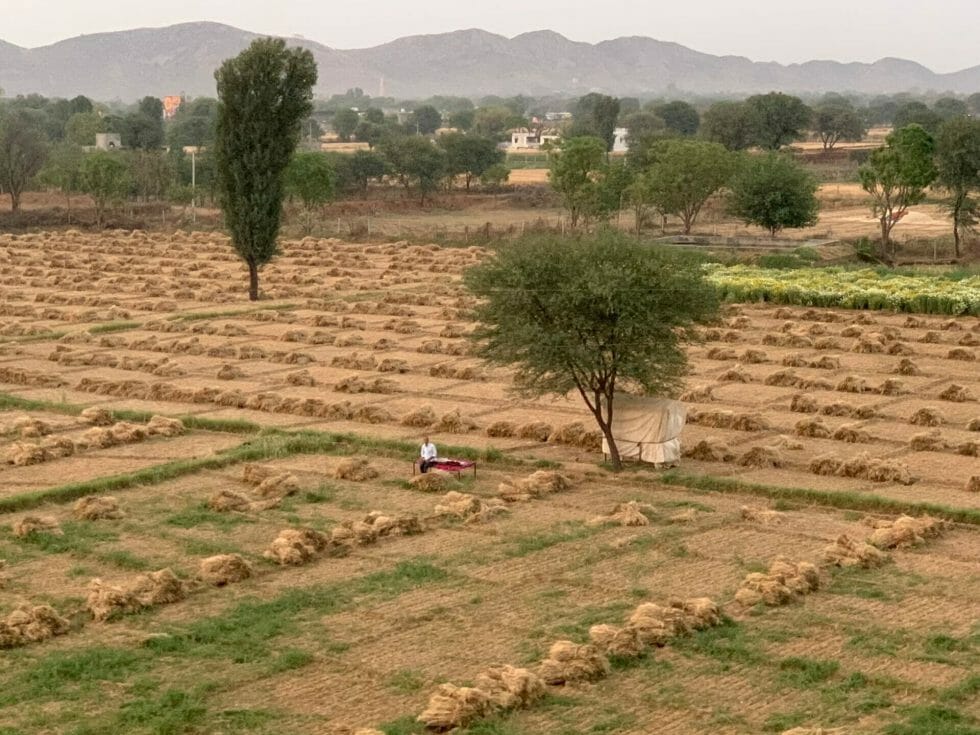 Having a little sit down in the fields 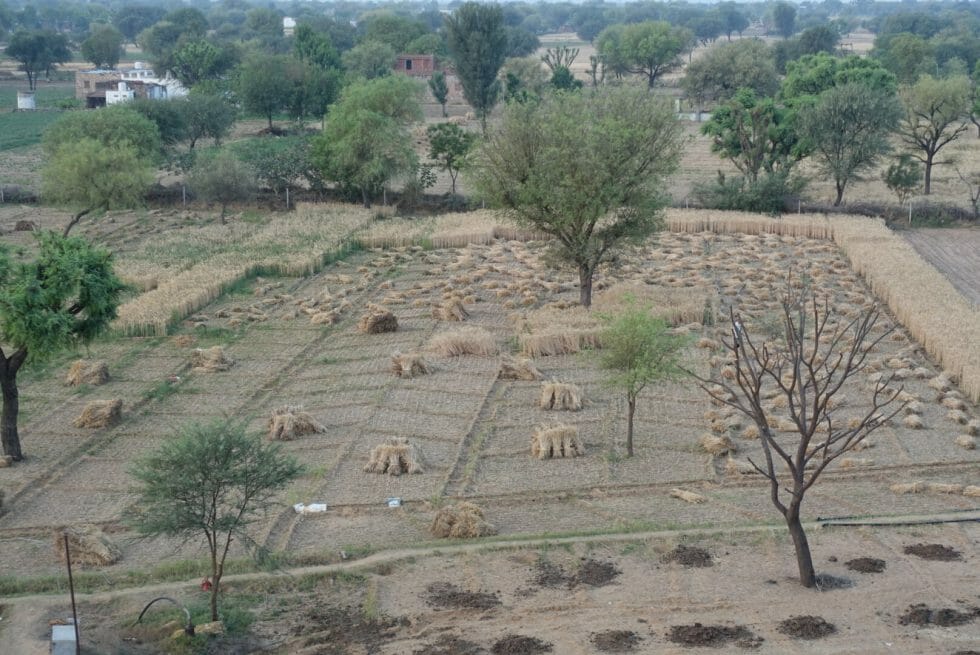 Mid harvest, with the rest of the field to go. We were here in early April, they get several harvests a year here. 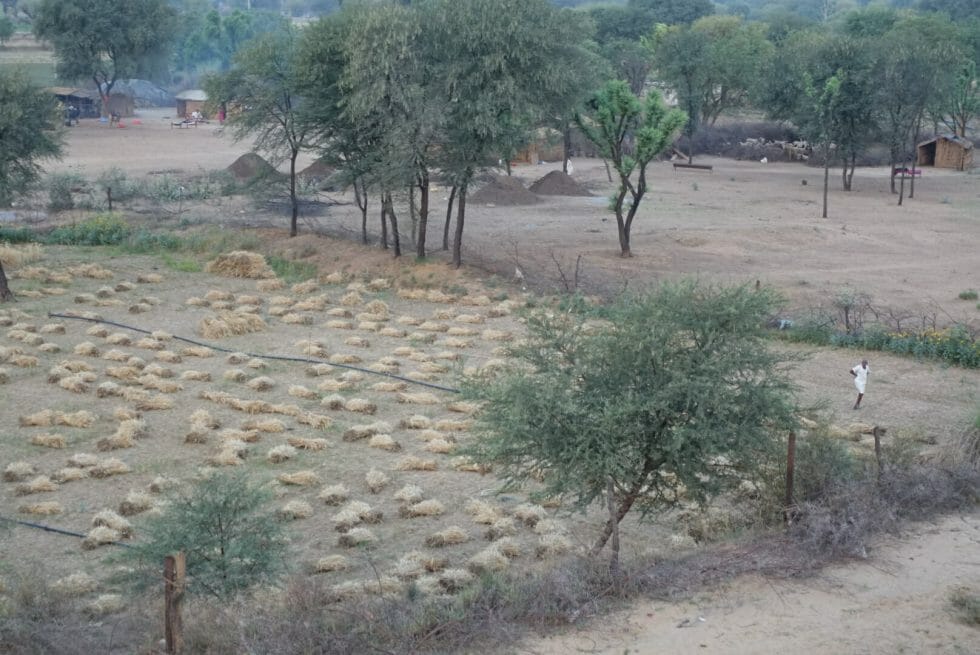 You can see people and huts in the background 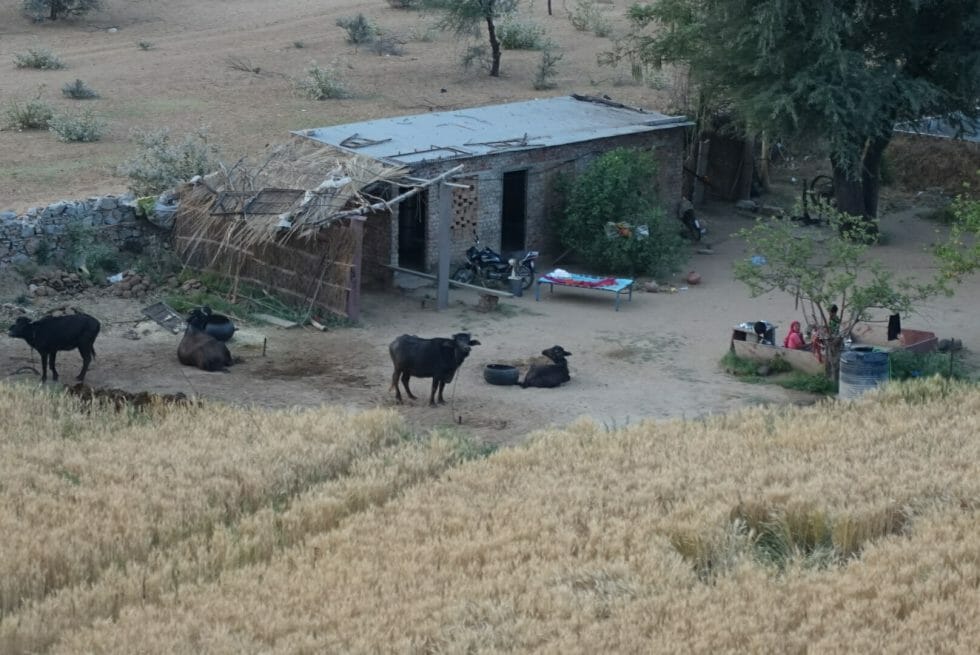 Surprising a local family and their lifestock 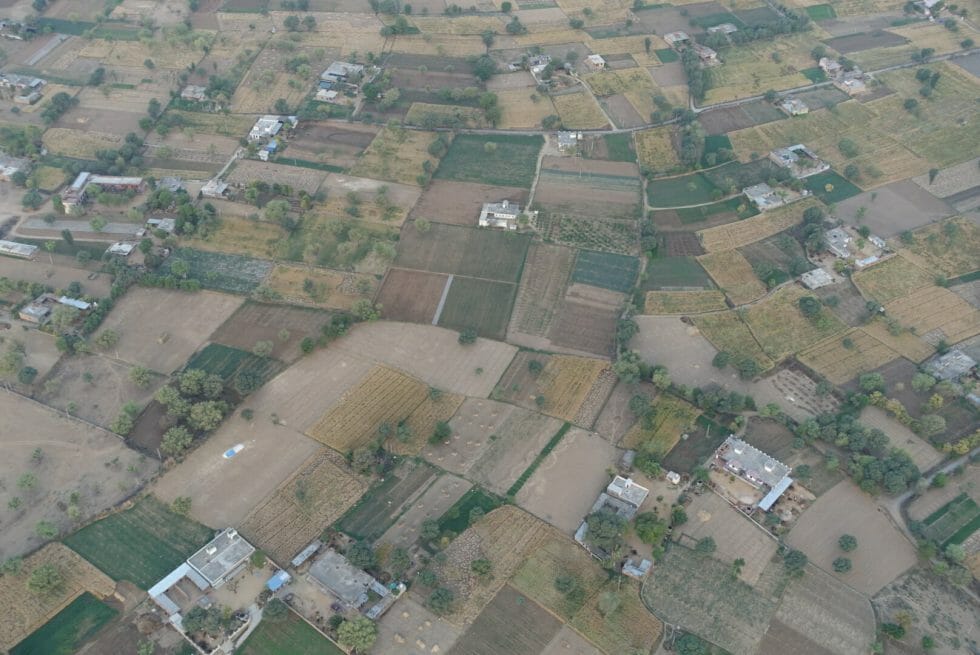 A different patchwork from England for sure!

You can see the haze in the photo – that was another reason why we stayed lower for most of our trip. 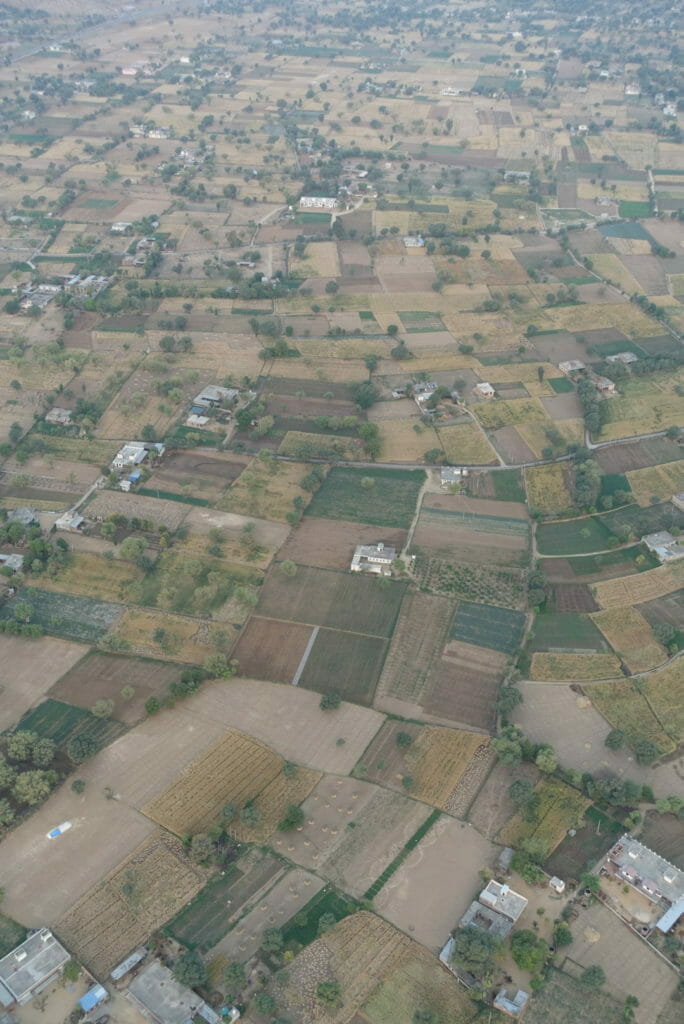 A hazy view from the balloon

Listen to the dogs barking below us!

Looking directly down and floating above everyone else going about their daily routines.

Before coming into land the pilot reminds you of the landing procedure. This is back to the direction of travel, knees bent, butts on the outside of the basket, hands grabbing the handles on the other side of your compartment. It’s like an extreme version of a plane brace position.

This is because quite frequently the basket will tip over and drag along the ground. This happened to me on our landing in the Serengeti. However we were happy that it didn’t happen for us in India! After a few bumps, our basket settled onto the ground. Although it tilted a few times, we stayed upright thankfully. 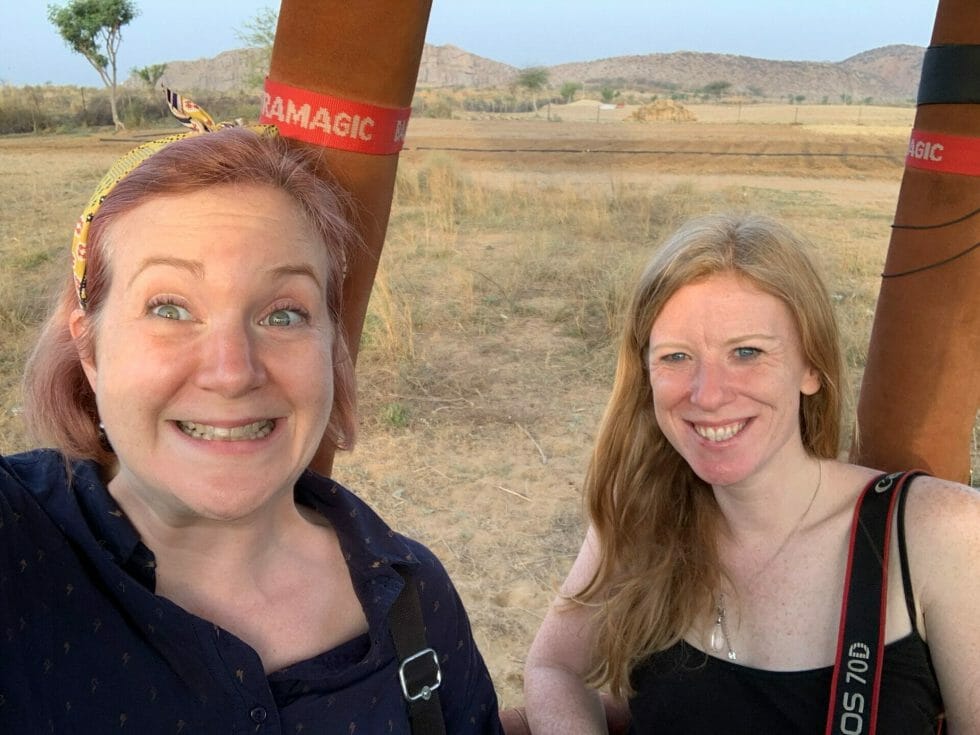 We survived the landing!

As we landed the local kids, and eventually their parents too, arrived to check us out. I think the kids were very curious and the adults wanted to know what compensation they would get for landing there! Luckily the field we landed on was harvested, so no crops harmed. 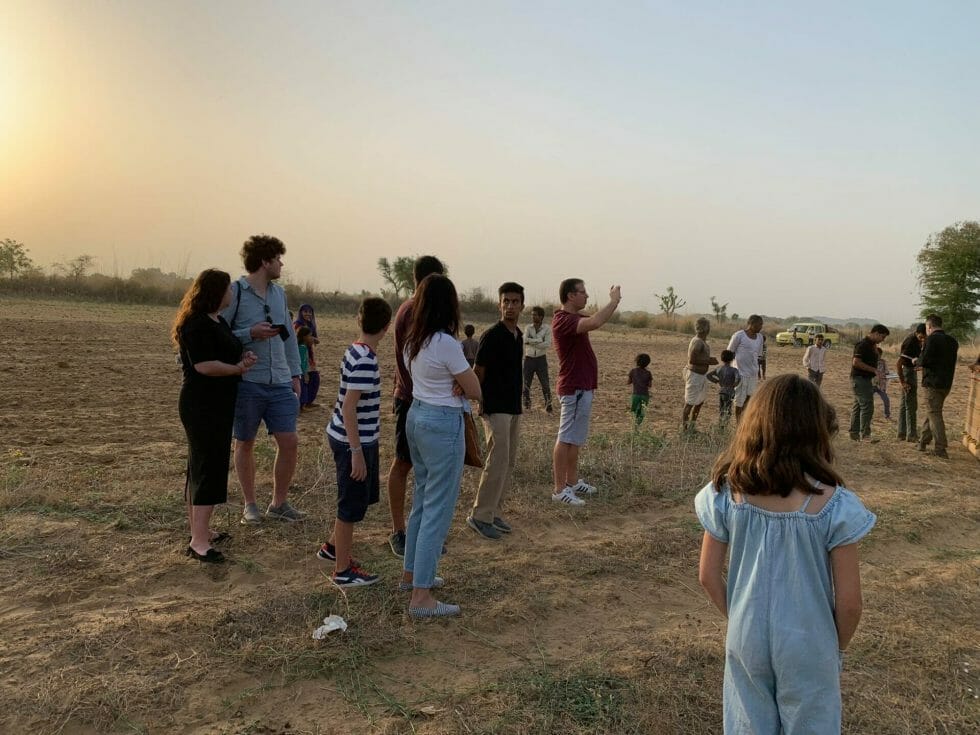 Whilst the crew (who had been following from the ground in vehicles), deflated the balloon, we all scrambled over the sides of the basket. Then the pilot did the traditional certificate ceremony, but this time with no champagne. 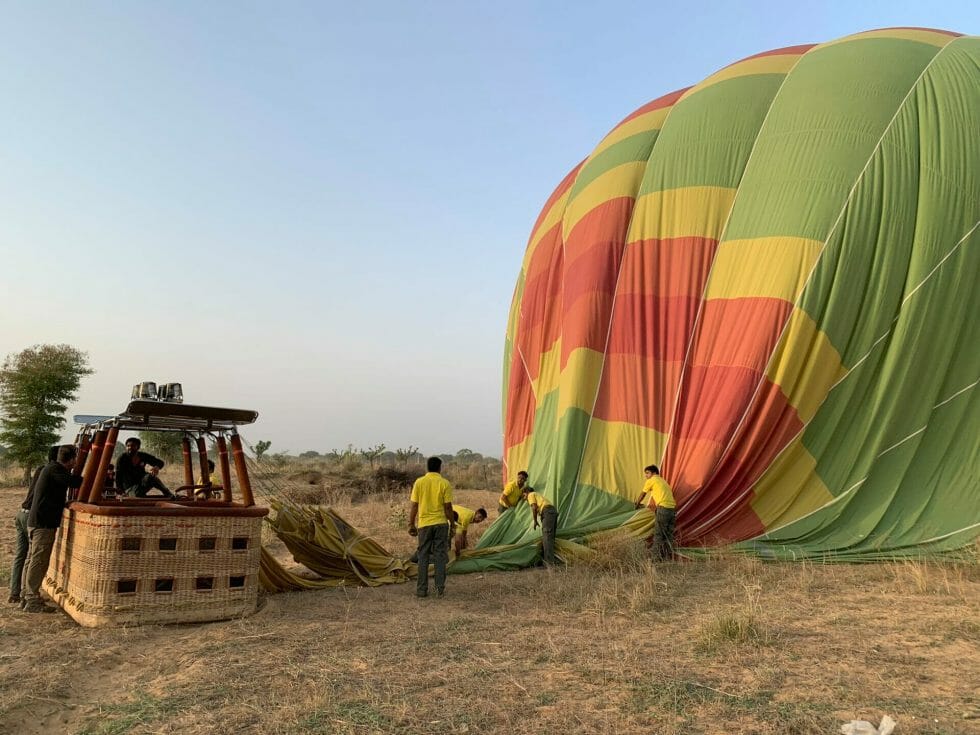 The Sky Waltz crew deflating and packing up the balloon

We then left the crew to finish deflating the balloon and pack it up. Our mini bus made it close to the field so we were able to jump in and they drove us back to the hotel. 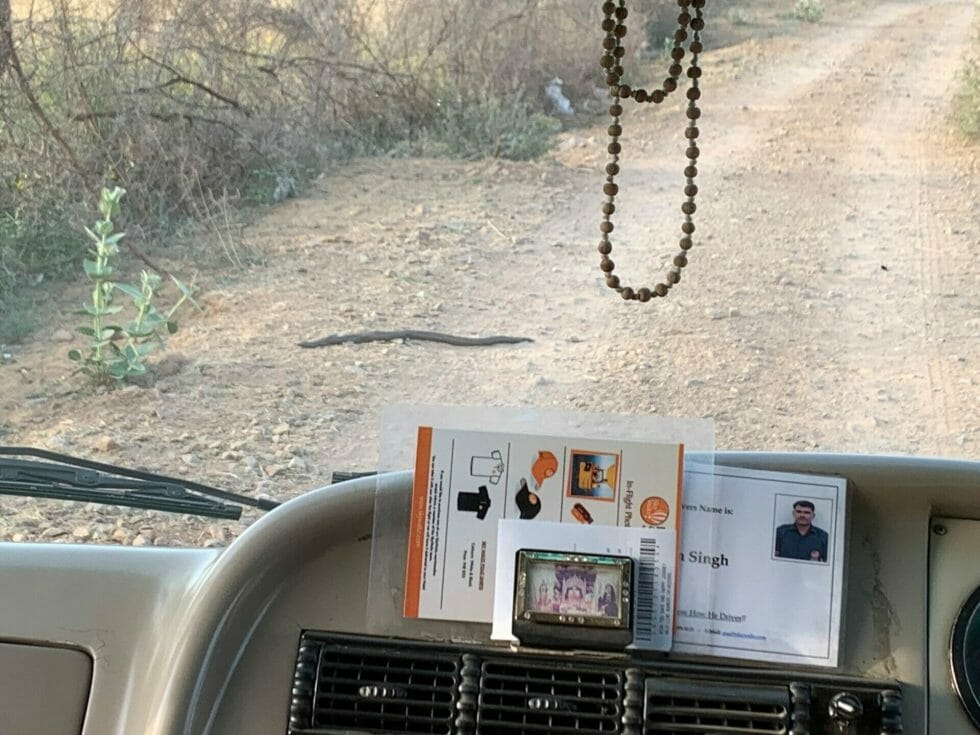 We just stopped to let this snake pass us on the road. We had just walked through that brush!!

The verdict – was it worth it?

For people like Kirsty, who haven’t been hot air ballooning before, I think it was worth it. However I’ve done hot air ballooning a couple of times now – once over the Serengeti in Tanzania and also hungover like hell in Cappadocia, Turkey. Both of those trips had something specific to look at. In the Serengeti it was the animals – we were effectively doing a safari from the air. Cappadocia had amazing rock formations and landscape to appreciate. In Rajasthan it wasn’t quite the same.

Don’t get me wrong – there is a certain magic to hot air ballooning. However seeing the haze in the air took away some of the magic – you can basically see the pollution generated by the industry in the area. The Sky Waltz website shows images of the Amer Fort at Jaipur. In reality you aren’t ballooning anywhere near Jaipur – but way out in the countryside. Obviously where you can go each day depends on the weather and the wind direction. They need flat empty space to land on, so this probably impacts what they can do at certain times of year too.

With hindsight I might have chosen a couple of extra hours in bed and more spending money for other parts of the trip! (Jaipur is good for shopping FYI).

Pin me for your India activity planning! 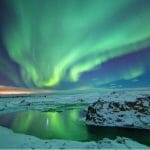 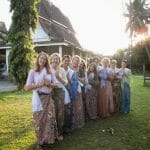 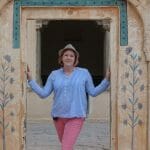 What to wear as a woman in India 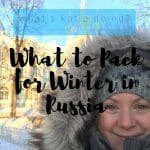 What to pack for Winter in Russia