EDIT: I’m super late in publishing this review of the Three Little Pigs Supper Club, (you may have already seen the pictures on Instagram!) because I’ve had the worst cold for the last week and a half. Apart from working I’ve been sleeping, rather than blogging, but never fear here it finally is!

About last night…. Big thanks to @lovepopupslondon and @wefifo_ for inviting me to attend @rocketronnie1979 Three Little Pigs Dinner party at Peckham Manor ??? . I had an awesome night and loved the pork based menu! Swipe ➡ to see all the courses! . First picture is our main of sugar pit bacon rib with triple cooked chips and a pickled slaw – the perfect accompaniment to cut the fattiness of the bacon. . 2 – Next up – the menu for the evening . 3 – Our canapé of crispy pork crackling and apple sauce . 4 – Bloody babe welcome drink – Aka a Bloody Mary with bacon! . 5 – canapé 2 – pigs in blankets with apple sauce and black pudding (those sausages were divine!) . 6 – our starter of broadbean houmous and 2 types of chorizo . 7 – the lovely hand dived scallop with black pudding and samphire – truly gorgeous! . 8 – Percy pig decorated raspberry cheesecake ?? . 9 – this little pig finishing off Percy! ? . 10 – @teapigs chai and gin chocolate truffles to finish us off and boy we were stuffed!! . An amazing experience I would recommend for everybody to try! You get awesome restaurant quality food, meet lovely people and have a great laugh! . #wefifo #supperclub #peckhammanor #threelittlepigsdinner #southlondon #fridaynight

Now if I was going to pick my favourite meat I think I would probably go with pork, it has a great versatility. Chef Ronnie Murray certainly agrees, using the tale of the three little pigs to inspire his latest supper club. 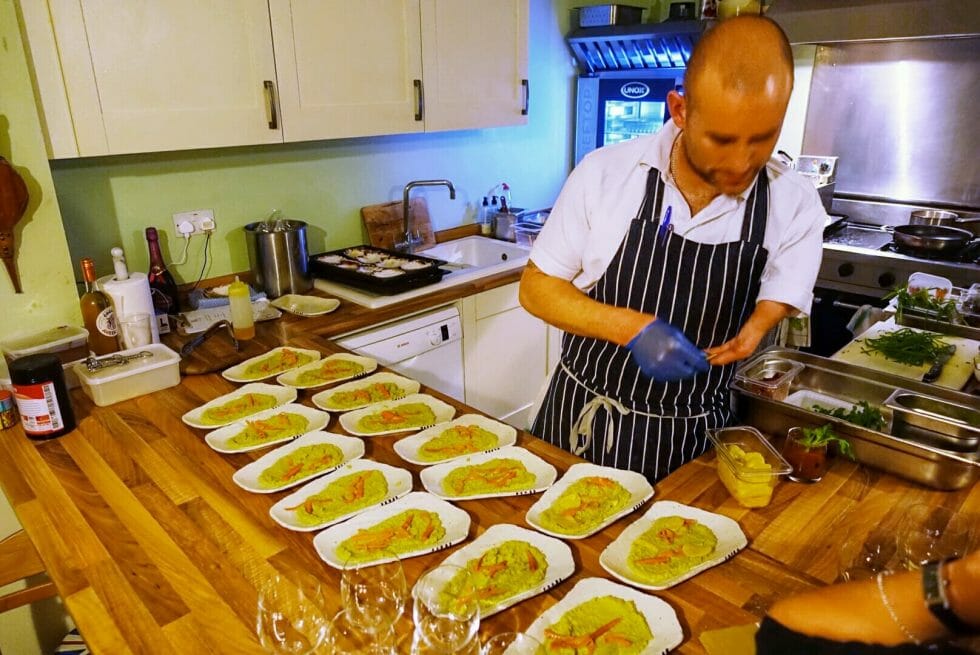 I went to investigate, digest and review on your behalf, invited by Wefifo via Love London Popups – my meal was free, but all views remain my own!

My friend Tiva (of meat fiend fame) and I headed to Ronnie’s house, Peckham Manor in South London. We were welcomed at the door by some very enthusiastic doggies! With a bloody babe in hand (a bacon pimped version of a bloody mary!) we hung out with Ronnie’s wife Leanne and nibbled on pork scratchings, whilst we waited for the rest of the diners to arrive. 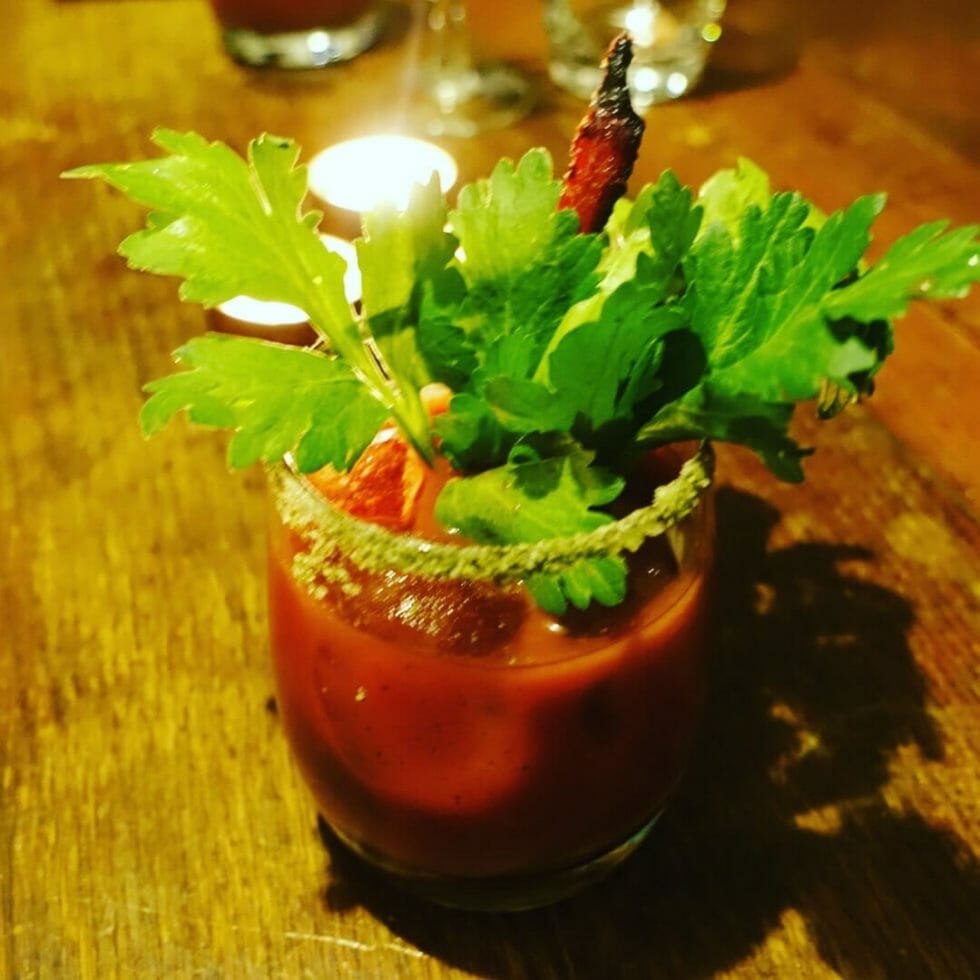 Garnished with bacon and an entire parsley plant 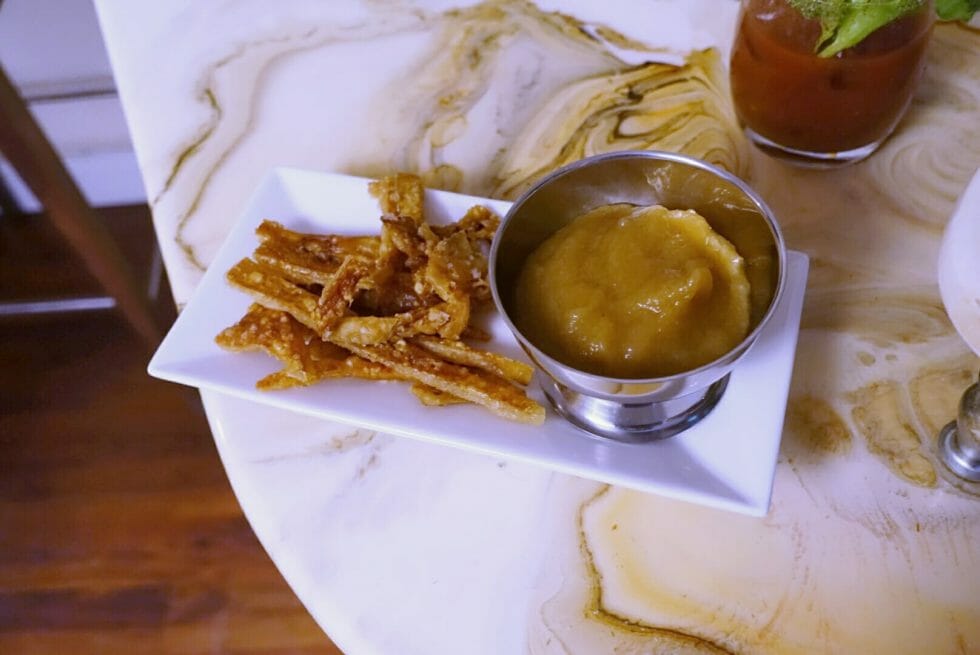 Pork scratchings and apple sauce to nibble on!

Ronnie does these supper club dinners about once a month at his Peckham home and Leanne regaled us with tales of the all chicken dinner (which included chicken in the dessert!). We ate the canapes – perfect little pigs in blankets served on top of an apple sauce and admired Ronnie’s home bar & kitchen. 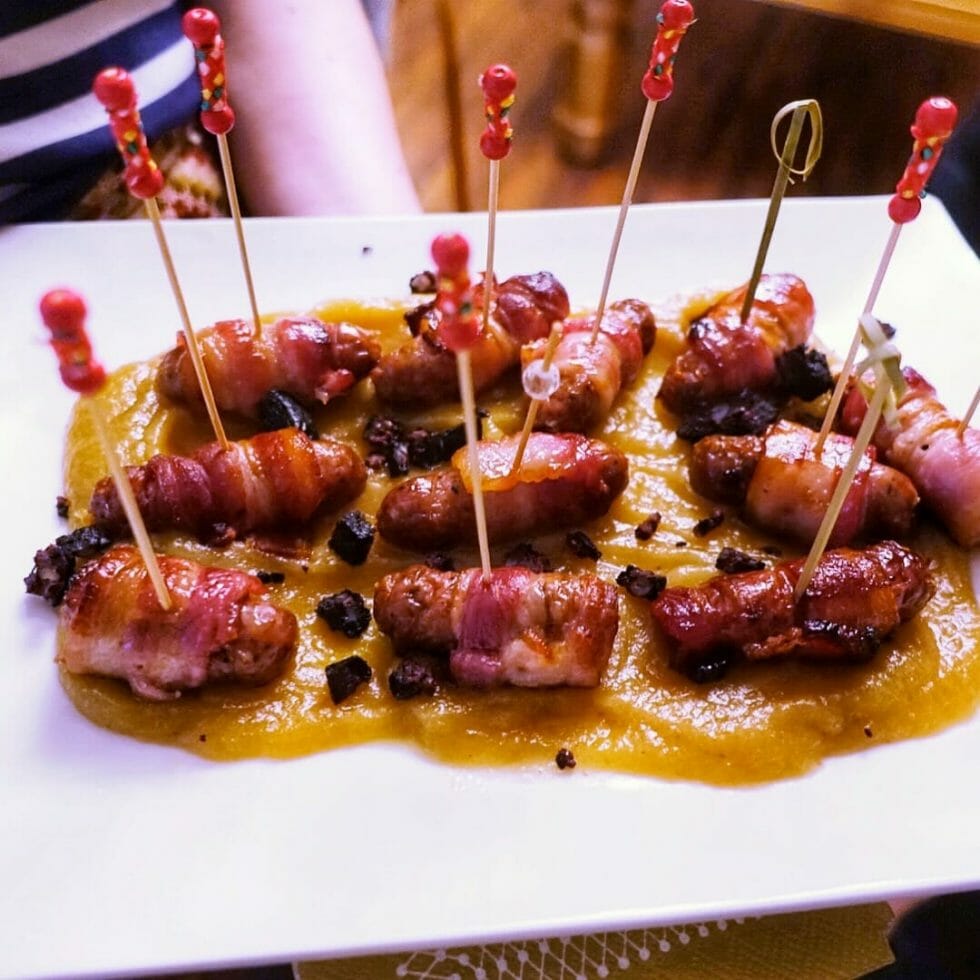 Ooh those sausages – they had a bit of a kick too

When we were all arrived – a combination of friends, family, neighbours and those of us that had come from further afield, we settled down for the next four (!) courses. 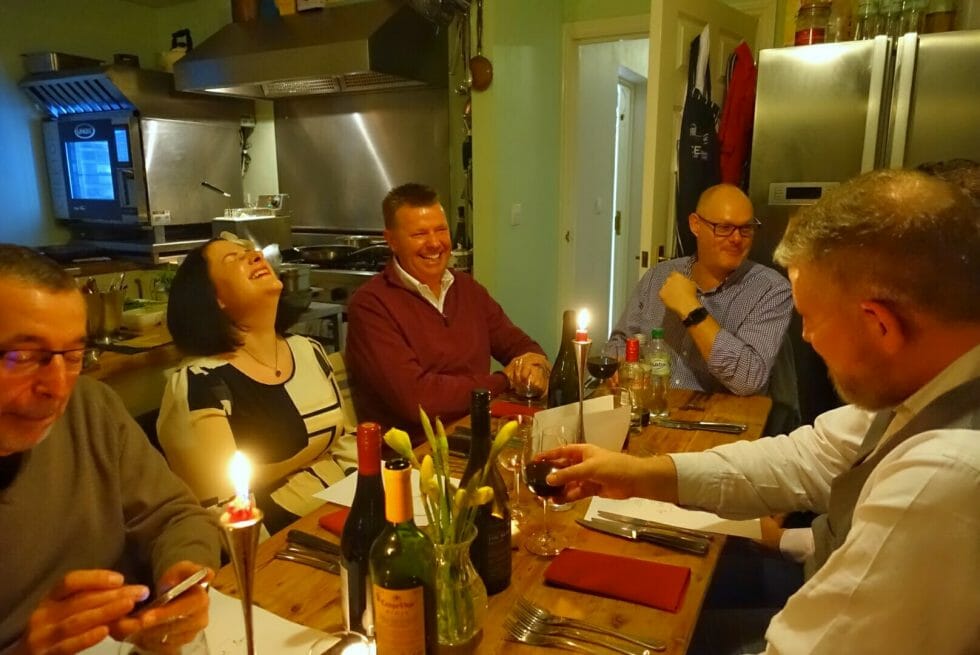 The atmosphere was fun and friendly! 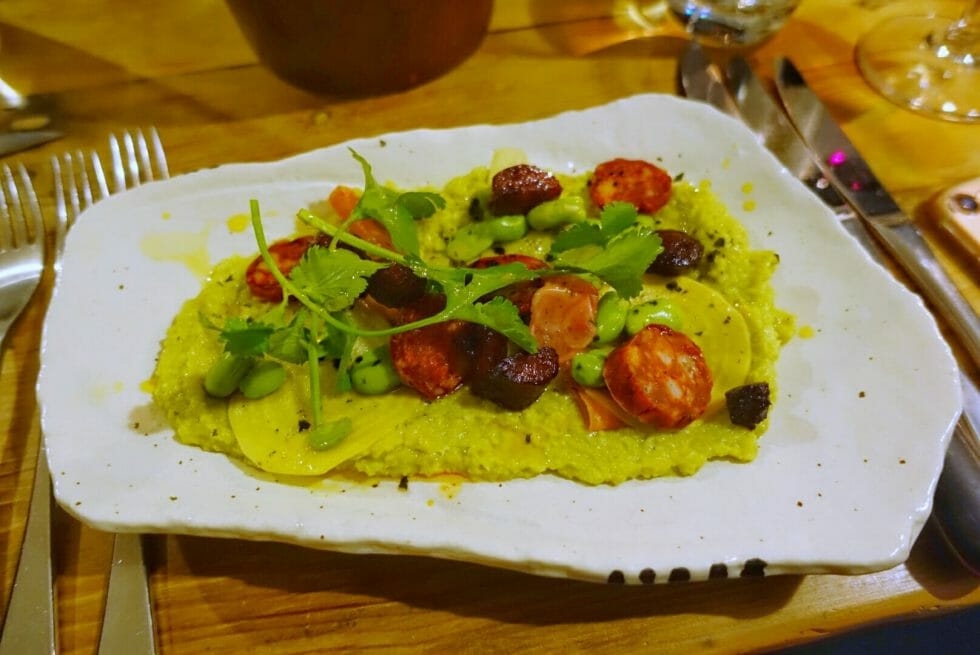 The green broad bean hummus makes it look like this is a healthy option, however it was topped with two different types of chorizo, creating a flavour sensation! You could really taste the difference between the two types of chorizo and the broad beans offset the stronger flavours nicely. 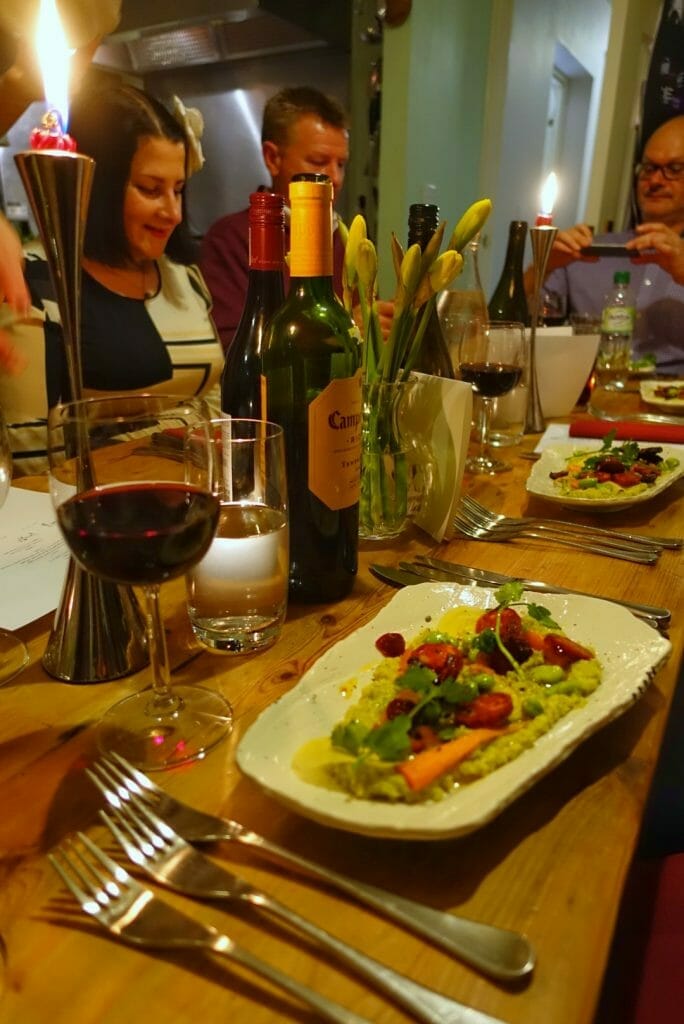 Seated on two tables in Ronnie’s kitchen everyone was wowed with the presentation of this first course. 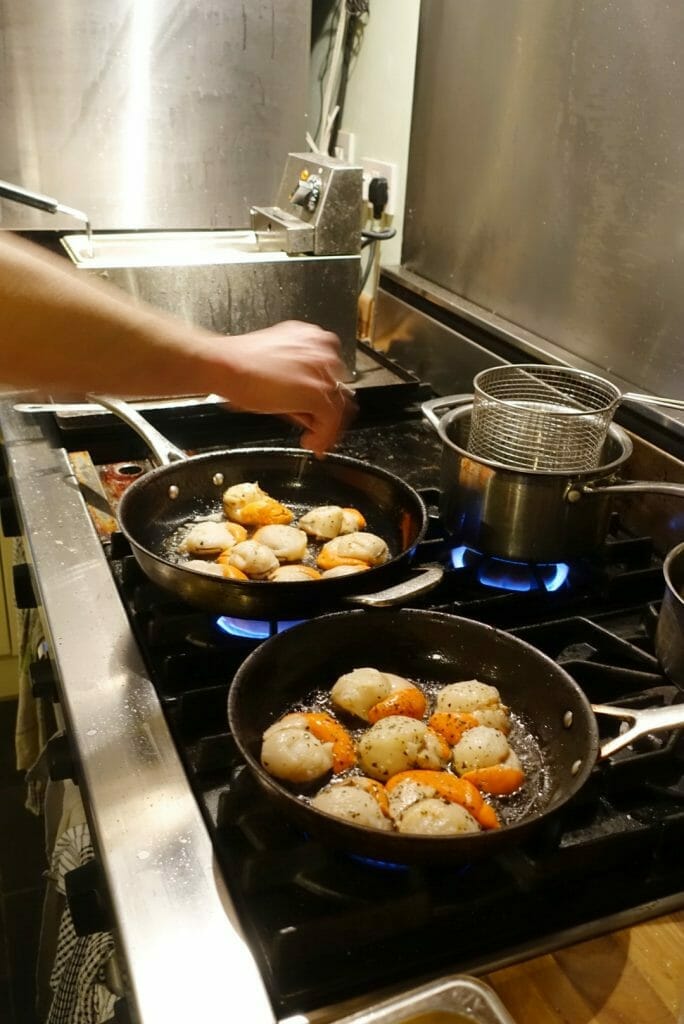 The scallops get going on the stove 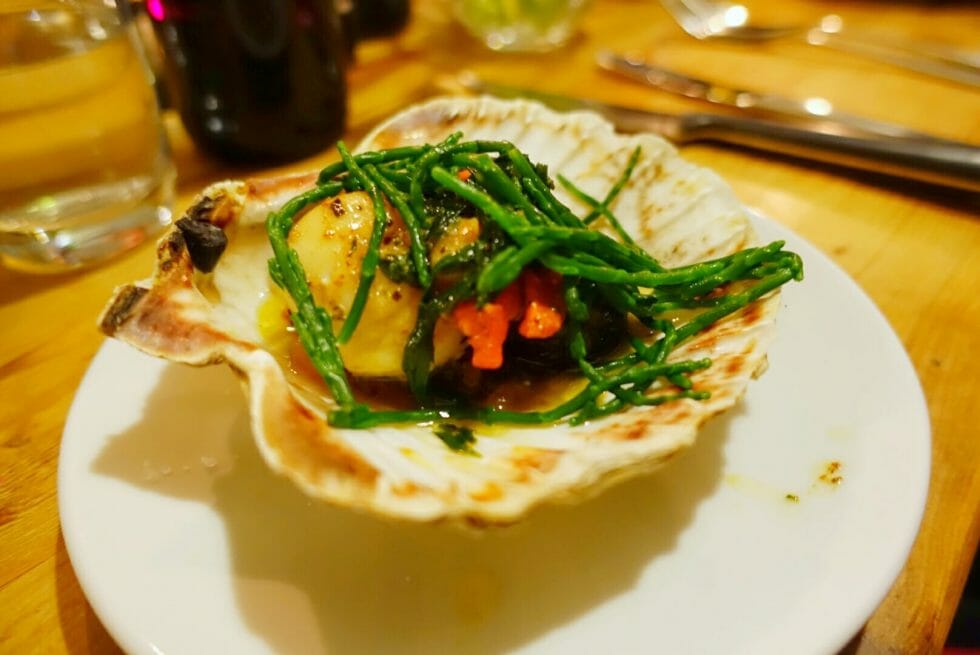 The scallops were so pretty served in the shells!

As you can see from the picture, these scallops were served with the roe still attached, in the shell. They were superb! Black pudding and scallops is a classic combination, however this black pudding was delicious in its own right! Served with the samphire and softer flavour of wild garlic, it really worked with the scallop. This was a perfectly proportioned course and one of my favourite!

The star of the show: 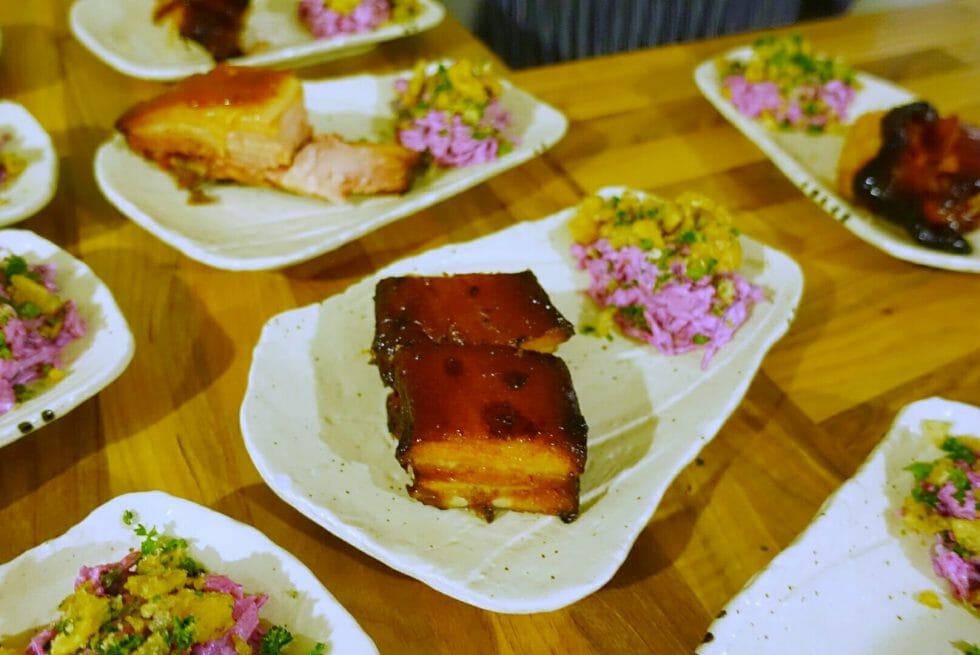 Plating up the porkalicious main course 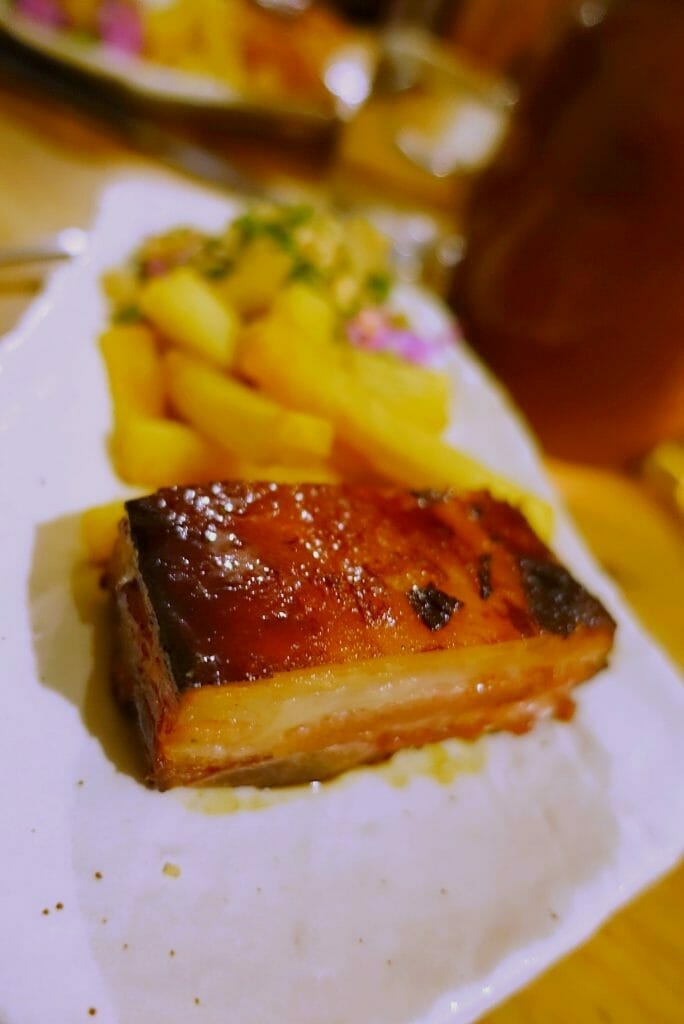 Cor look at that!

The sugar pit bacon ribs spent 10 days in a salt and molasses pit (hence the name!). All the meat products are from Peter Hannan in Northern Ireland and all impressed us! The bacon rib had a great caramelised outside and tender meat full of flavour. It was served with triple cooked chips and a winter slaw.

Not only were the chips triple cooked, but they were cooked in the rendered pork fat. Nothing goes to waste here… The result were crunchy chips with a fluffy inside – just perfect! The pickled winter slaw, made with red cabbage and vinegar, cut through the fattiness of the pork, making the perfect accompaniment.

This course almost floored me… Andreas, seated next to me, was saving himself for dessert, and I couldn’t finish all my meat and chips. 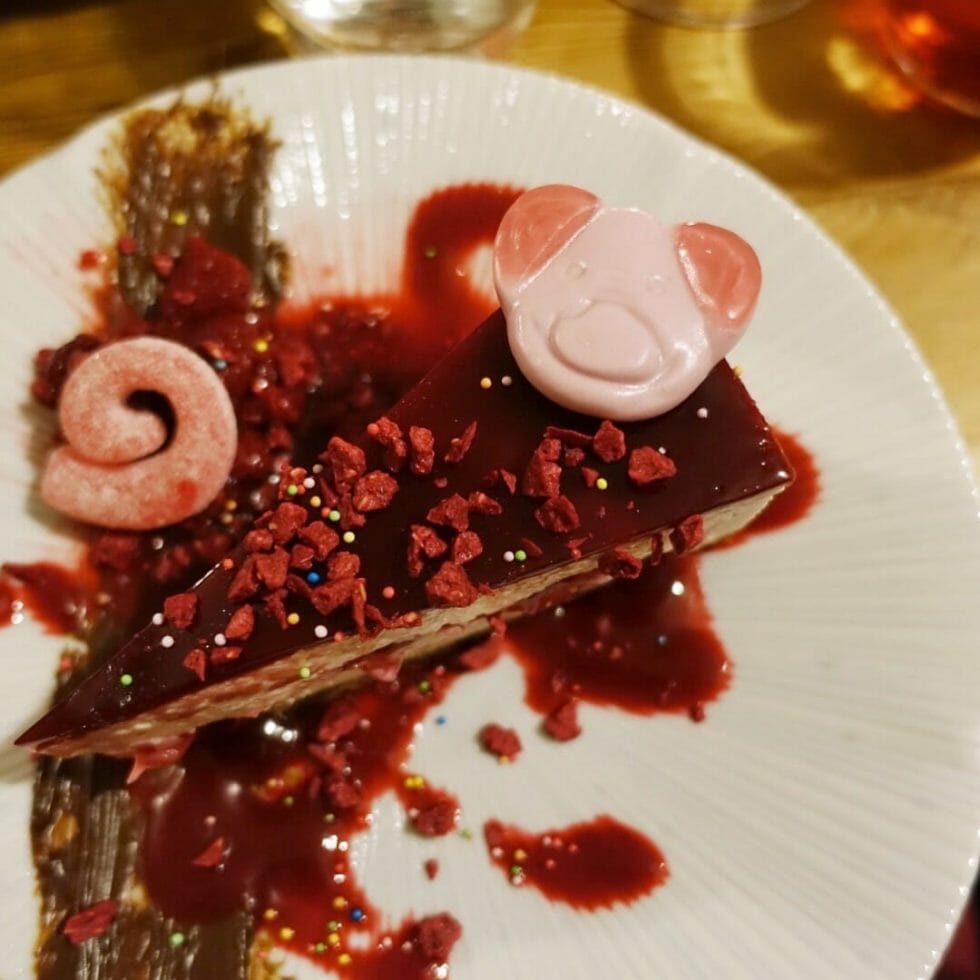 Percy pig on top of the raspberry cheesecake 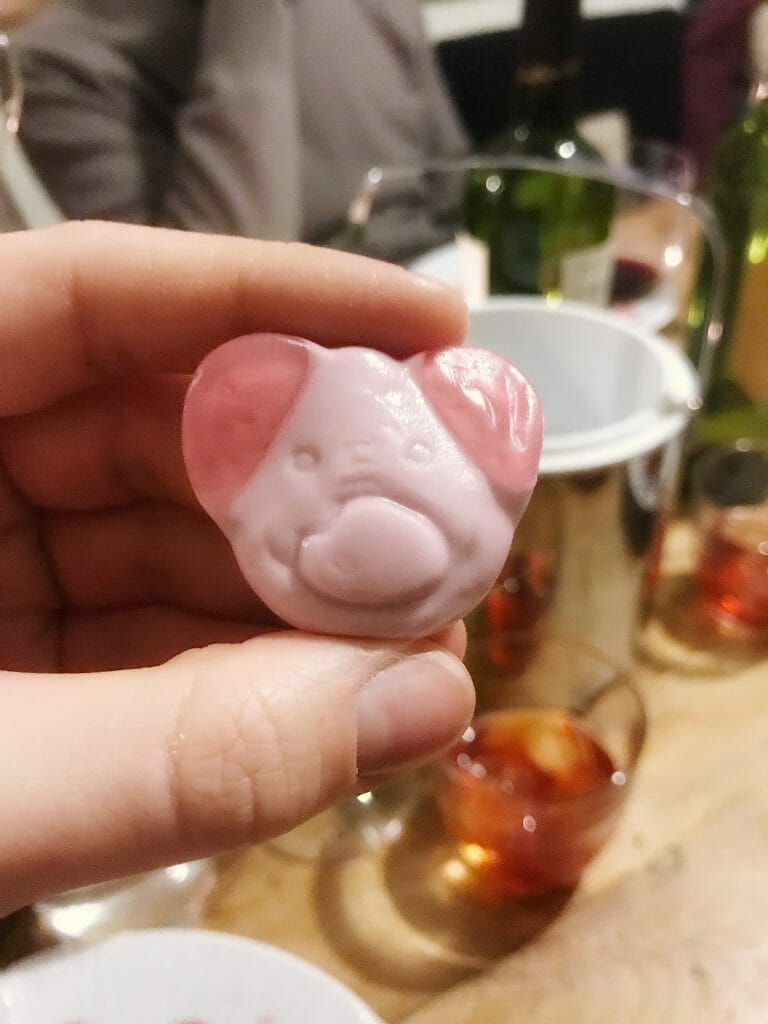 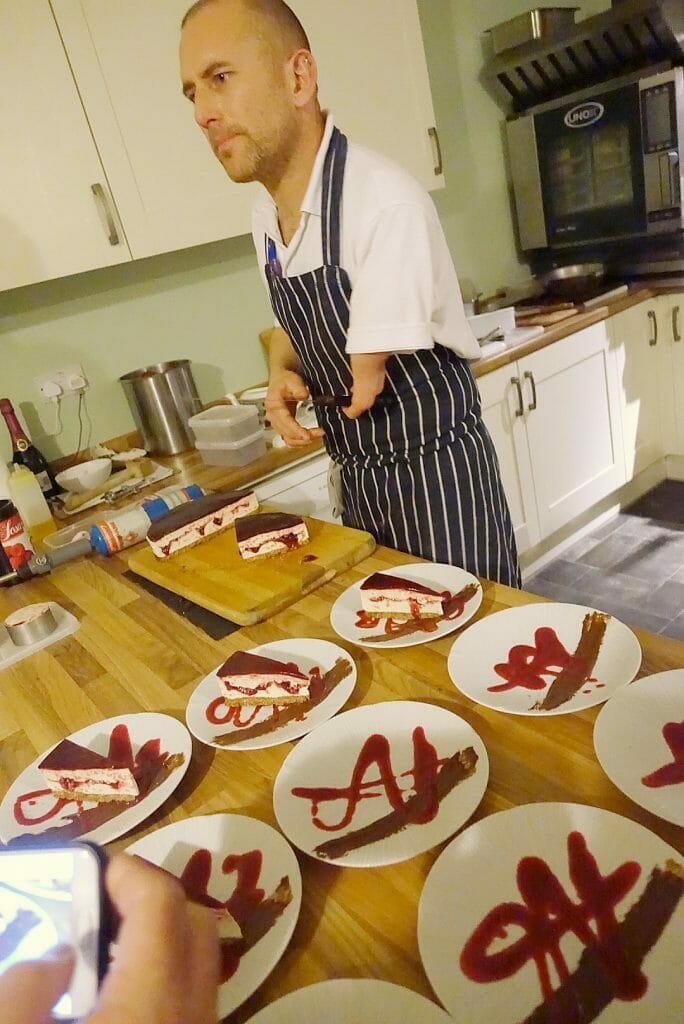 Someone was asking Ronnie a serious question, whilst we paparazzi’ed him!

So unlike the chicken dinner, this dessert doesn’t contain pork, it’s just decorated with Percy Pig sweets! The actual raspberry cheesecake was a masterpiece, with layers of raspberry rippling through, a great raspberry coulis topping and freeze dried raspberry pieces to liven up the texture.

“I just came for dessert”

Andreas, my neighbour at the table, said that he was ‘forced to eat everything else, because actually he just came for dessert‘. And it was superb – this was a high quality cheesecake with great raspberry flavours and texture. Ronnie says the secret to make awesome cheese cake is to use hobnob biscuits for the best base… you heard it here first folks!

Despite being very full, this dessert went down easily, it was that good I just couldn’t leave it.

Last but not least, teapigs tea and gin chocolate truffles

By now I wanted some help with digesting and the chai tea that I got washed down my chocolate gin truffle easily. A great ending to a great meal.

The supper club setting, eating in Ronnie’s kitchen, watching the cooking and sharing a table with new people, makes for a very homely evening, which was a lot of fun! As you can see the food was top notch, but don’t just take my word for it, check out everyone else’s opinions too, here’s my friend Tiva, and Michael from South London Blog:

I think you’d agree that for a ticket price of £40 we got our money’s worth for restaurant quality food. Four courses, plus canapes and petit fours is not bad at all, especially when you consider you are eating at the equivalent of the chef’s table. Whilst you do need to bring your own drinks, (we brought some wine and pre-mix negroni – naturally), this means you have the flexibility of drinking what you want.

Ronnie’s next Supper Club is at a local restaurant in Peckham – Louie Louie and is showing casing Poshed up junk food. Find out more and book via Wefifo here. Big thanks to Love Pop Ups London for the opportunity to review!

I went to investigate, digest and review on your behalf, invited by Wefifo via Love London Popups – my meal was free, but all views remain my own! 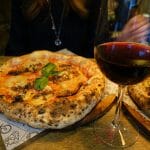 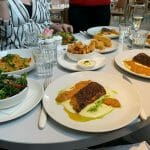