My friend Antonia and managed to get tickets for Wimbledon this year – much excitement!! 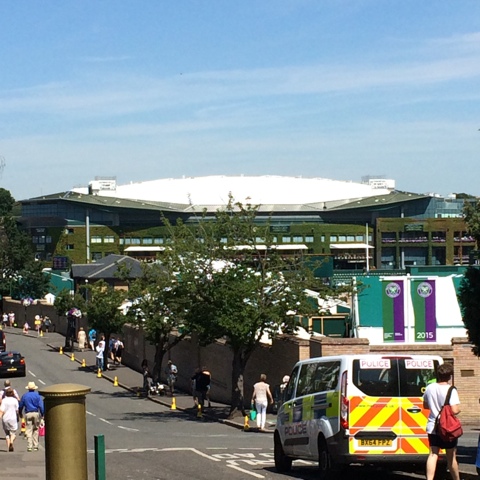 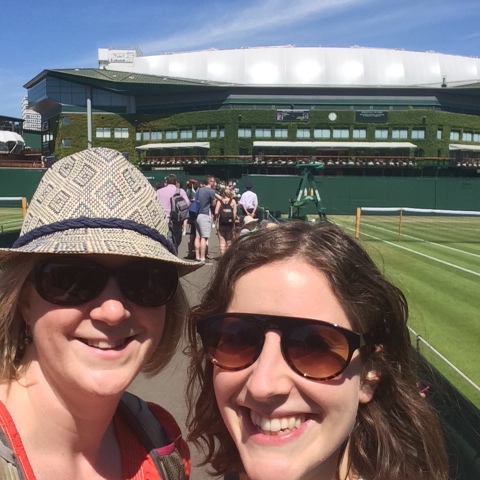 Inside with Centre Court behind us! 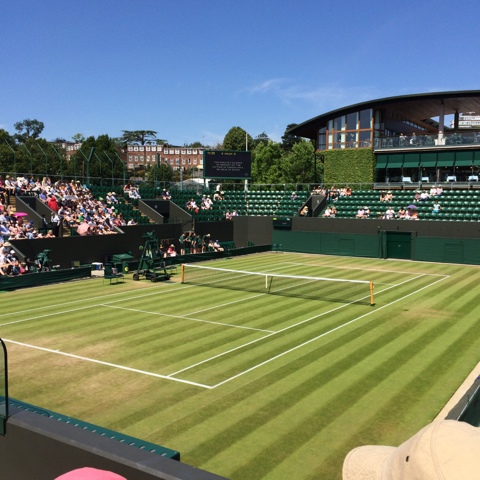 Our view of court 3 – before play started so the reserved seats weren’t full yet. Ps it was hot!!!

We arrived at Wimbledon just after 11am and walked up the hill rather than wait for the bus (another queue…) we got into the court shortly before 12 and witnessed the stillness of the whole Wimbledon site for the minute’s silence for the victims of terrorism in Tunisia.
After that moving moment, there was time for a more lighthearted selfie before our first match started. 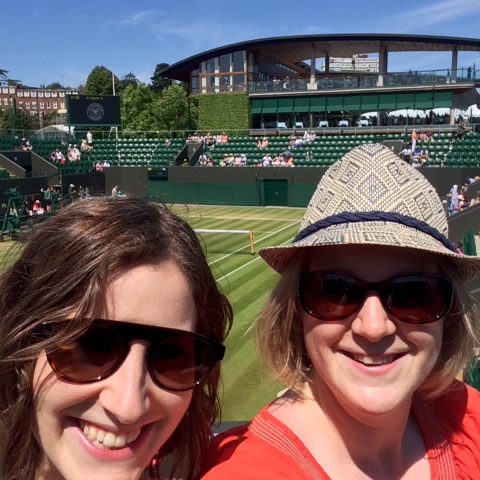 First up was Marcos Baghdatis and David Goffin. 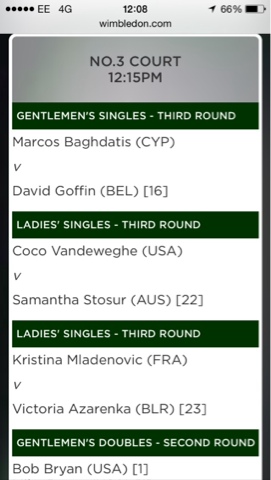 The match started off with Baghdatis looking strong, but then the tables turned and Goffin won! In typical British fashion the crowd was cheering for the underdog Goffin, which obviously helped him! 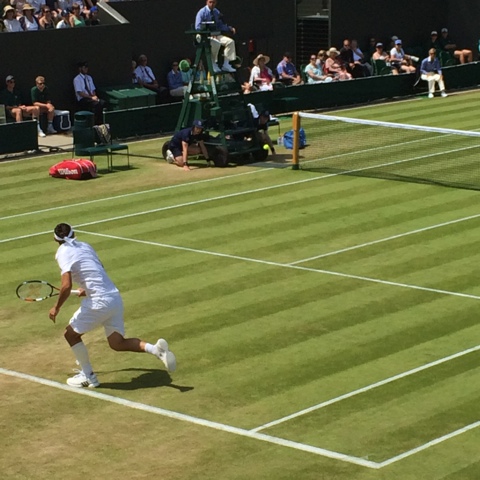 Baghdatis running for the ball – we were super close to the action, at one point it looked like he glared at someone supporting Goffin – scary!

After that 2 hour match we needed to get out of the direct sun, so a break with frozen Robinson’s slushies, Pimms and a nose around the grounds was in order. 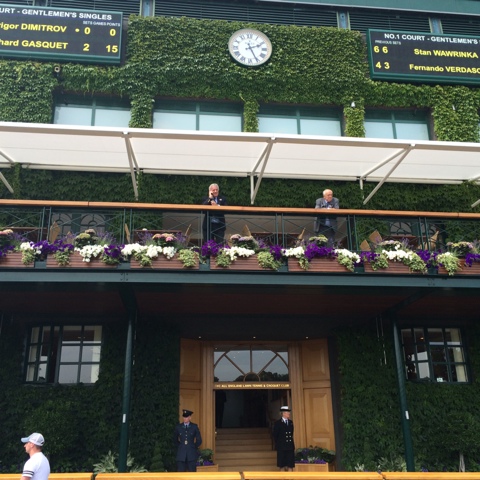 The armed forces were guarding the entrance to Centre court! 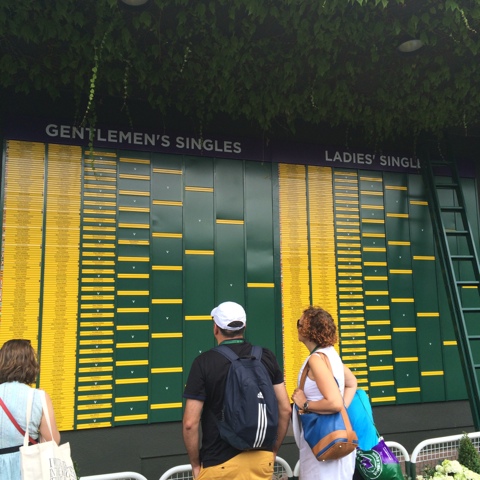 Checking out the scores so far… 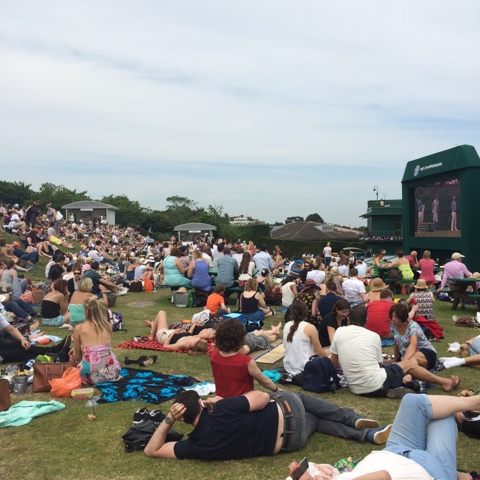 The hill – not too packed, but with plenty of people having a snooze in the sun! 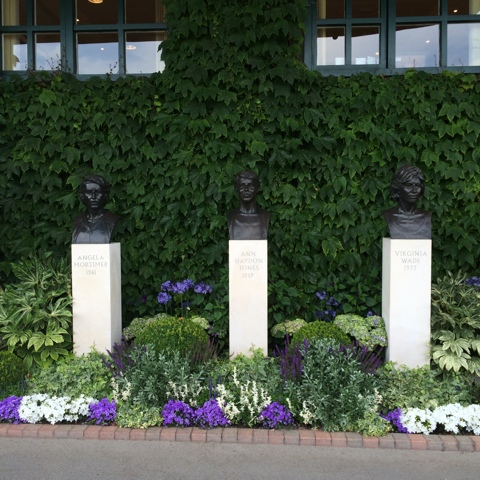 When we went back to our seats we had our lunch whilst watching Coco Vandeweghe make short work of Samatha Stosur – the match only lasted an hour. Light relief came from a slightly drunk lady I the audience shouting support to her fellow countryman, Stosur, which made Stosur smile and raise her game for the last few points. 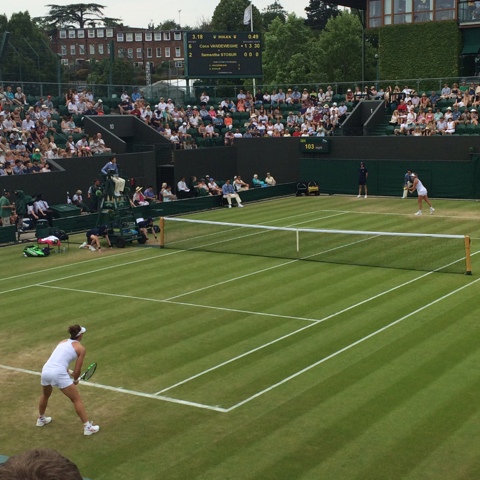 Half way through the second set as Coco takes Sam in straight sets.
Next up was the closely fought match between Kristina Mladenovic & Victoria Azarenka. 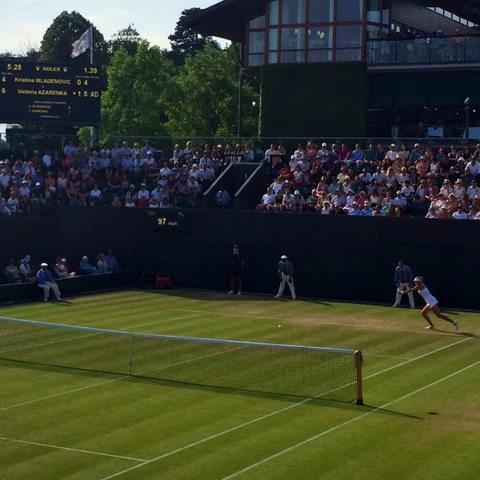 At first it looked like Victoria was in charge, but Kristina had support in the crowd, kept her cool & won, but it was close – lots of points went to deuce several times!
After those matches Serena Williams versus Heather Watson had started on Centre court – so we headed to the hill (along with most of Wimbledon!) to watch it. The atmosphere there was amazing. The hil got so crowded with people joining after the games on the outside courts wrapped up that they stopped letting people on.
We sat through sooo many deuce, advantage miss Williams, deuce, advantage Miss Watson, that I thought our nerves were going to break! If the crowd could have helped Heather through I think they would have! She played a great game, but a even with Serena looking a bit off she couldn’t match that power…. This year at least…
If you want to watch Wimbledon in person this year I would recommend trying to get a reserved seat, but even if you can’t get those tickets, there is always that typically British institution ‘The Queue’ (it’s obligatory to queue for everything at Wimbledon lol!). The queue is for ground passes – ie it gets you in, but not access to any particular court. Seats are first come first served and there is always the returns for Centre, court 1 and 2 (another queue!) with proceeds from the ticket resale going to charity.
All info is on their website 🙂
Ps I’m writing this on the balcony with a G&T ice lolly, recipe courtesy of BloodyHELLBrennan 🙂 going inside before the iPad has a melt down, it’s finally summer – yeay! 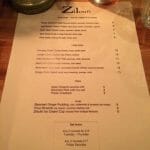 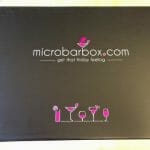 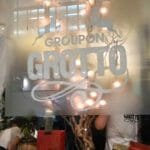 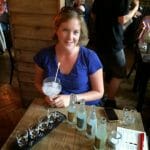