Have you ever made dumplings from scratch? I’ve certainly eaten enough dumplings, but I’ve never made them from scratch, including the dough before! So when I was invited to visit Alla from Alla’s Yummy Food to make Russian dumplings, I jumped at the chance. I went along with some of the other bloggers from Love Pop Ups London. 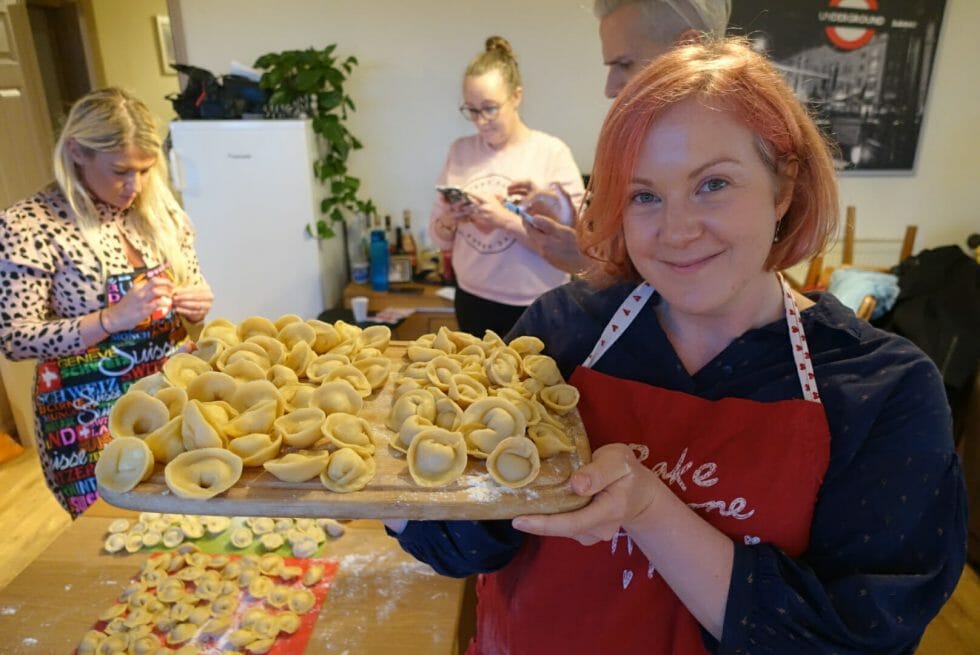 Look what we made!

*Full disclosure, my cooking class experience was provided for free in return for this review, however all opinions are my own*

Alla is a TV and You Tube chef with a Latvian/Russian background. I first met her attending a WeFiFo supper club with Lerato where she was checking it all out for her own Russian supper clubs. Whilst Alla cooks a lot of Russian food for the supper clubs and events like this dumpling class, her real passion is cakes and you should totally check out her Instagram for inspiration.

But back to dumplings! Alla has started running Russian dumpling classes as Airbnb experiences. The same way you can book your accommodation through Airbnb, you can book experiences run by locals too. You might not think ‘Russian dumplings’ when considering a London experience. However I always appreciate food experiences and if you have a long stay in London, or live here, then this is ideal for you.

After work I headed to the Victoria line for the short journey down to South London. Alla runs the dumpling class at her apartment in Stockwell, which is less than half an hour from central London on the Victoria or Northern Lines. When you get out of the tube station it’s a short walk to the estate where Alla’s apartment is in the tall grey tower block.

Just be careful using the address with google maps – some people got a bit lost in the estate trying to find the right building, but the postcode took me straight to the right place. Her apartment has has great views of South London, as its on the 14th floor. 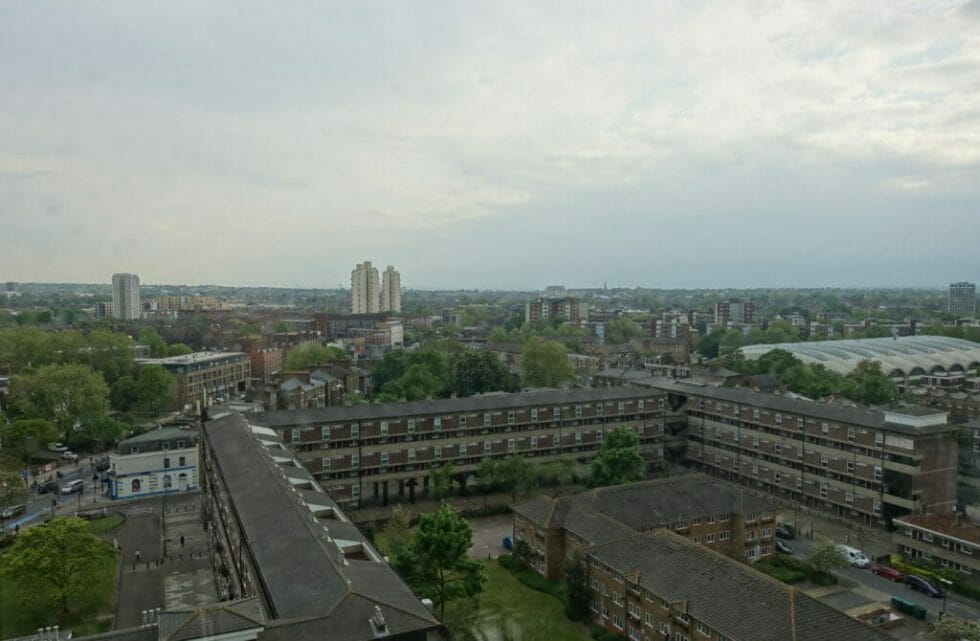 View out of the window

On arrival I left my shoes and coat in the hall and joined the others in the living/cooking space for a cup of Alla’s bergamot ice tea. Unfortunately there wasn’t an alternative drink except water, so please do bear this in mind if you can’t drink caffeine. Alla does ask for dietary requirements on booking, so you should include this there. Alla’s dog Milo was also in the flat, and whilst he was a sweetie, just be warned if you don’t like dogs or are allergic to them. 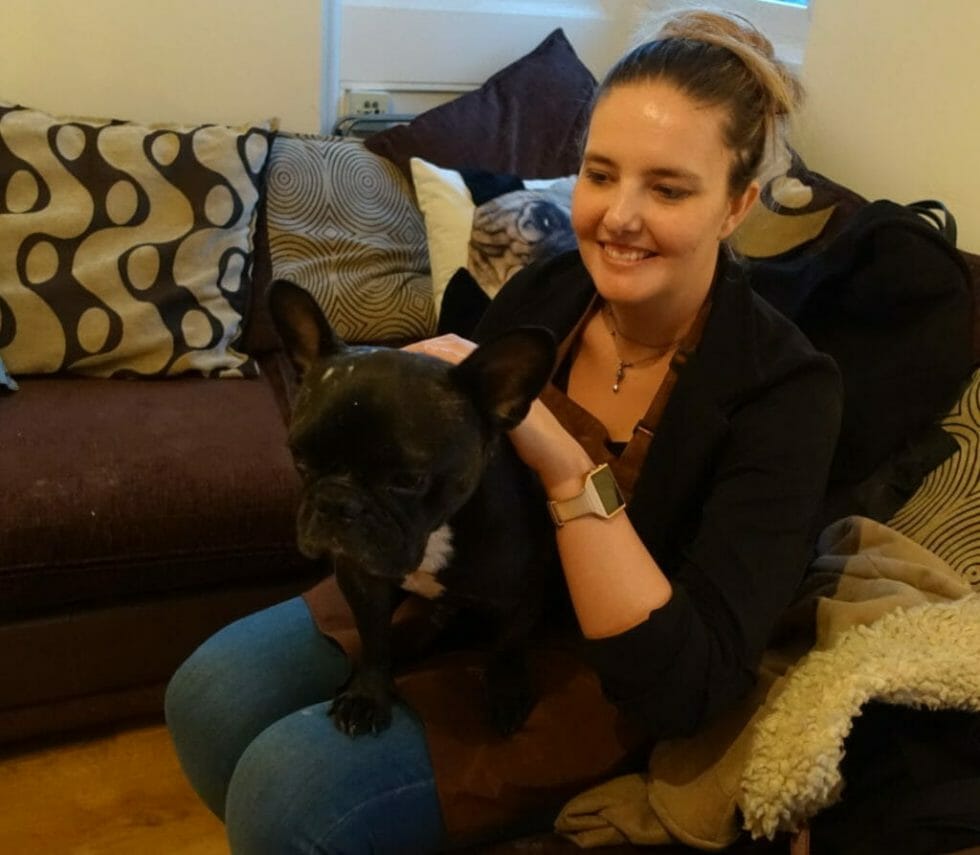 Chelsea and Milo got on well

The dining table was set up with recipes and the ingredients for the dough, pre-measured for us. 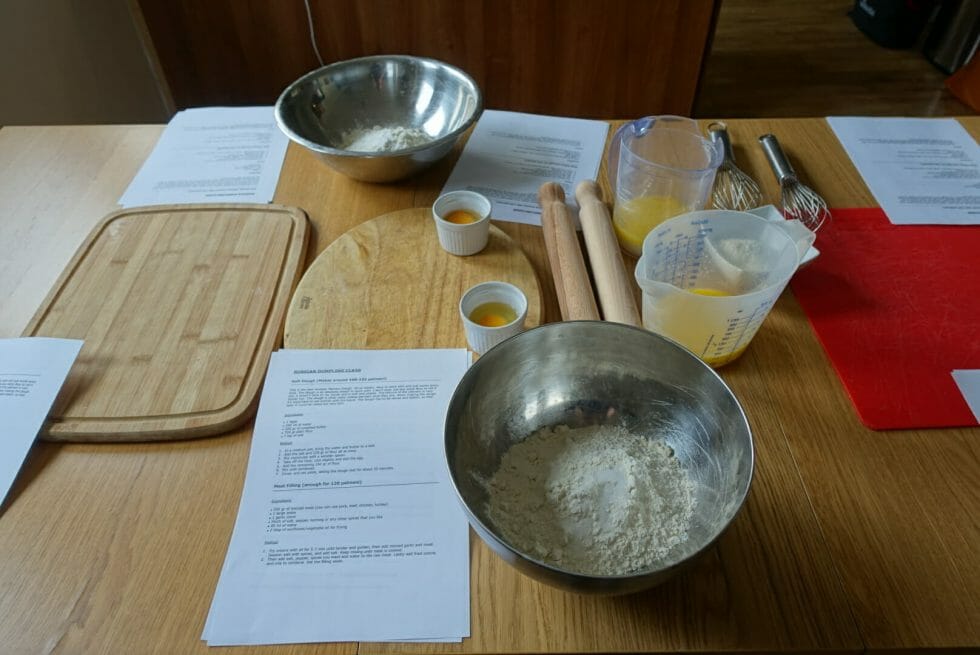 Alla had all the dumpling fillings prepared on the counter-top to show us those also. 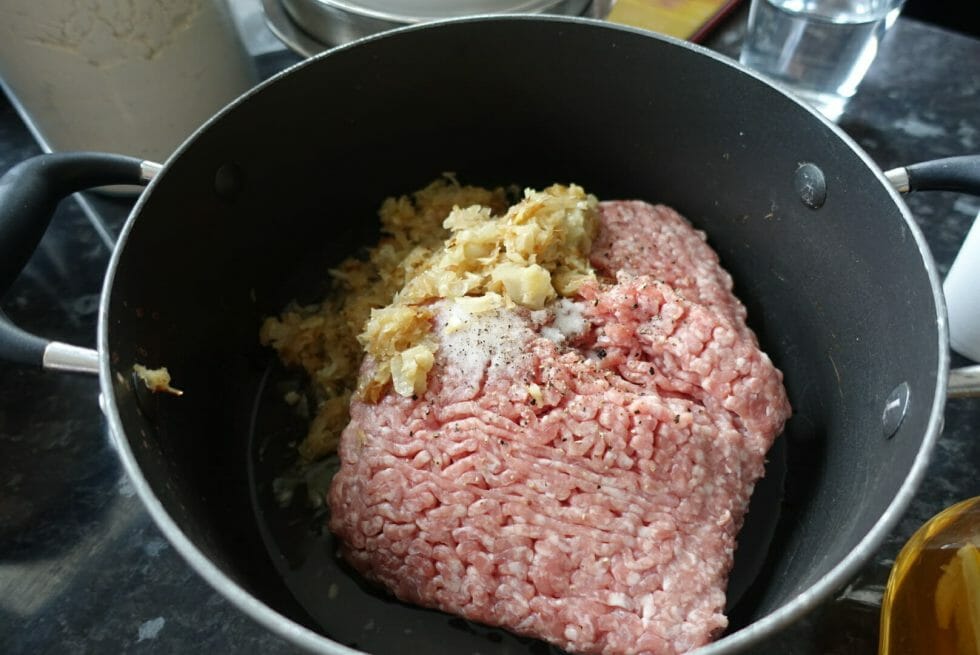 After we washed our hands and donned aprons from Alla’s collection we were ready. The class started with us pairing up (8 people in total, so 4 pairs around the dining table) and mixing together the ingredients for our dough. It’s a fairly straightforward dough with flour, eggs and butter/oil being the main ingredients. 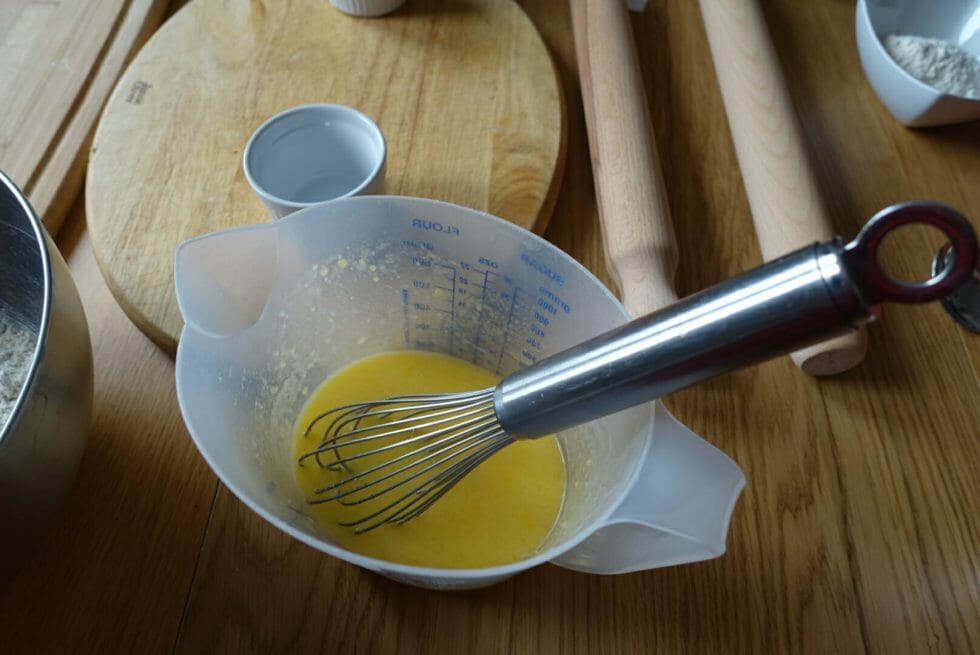 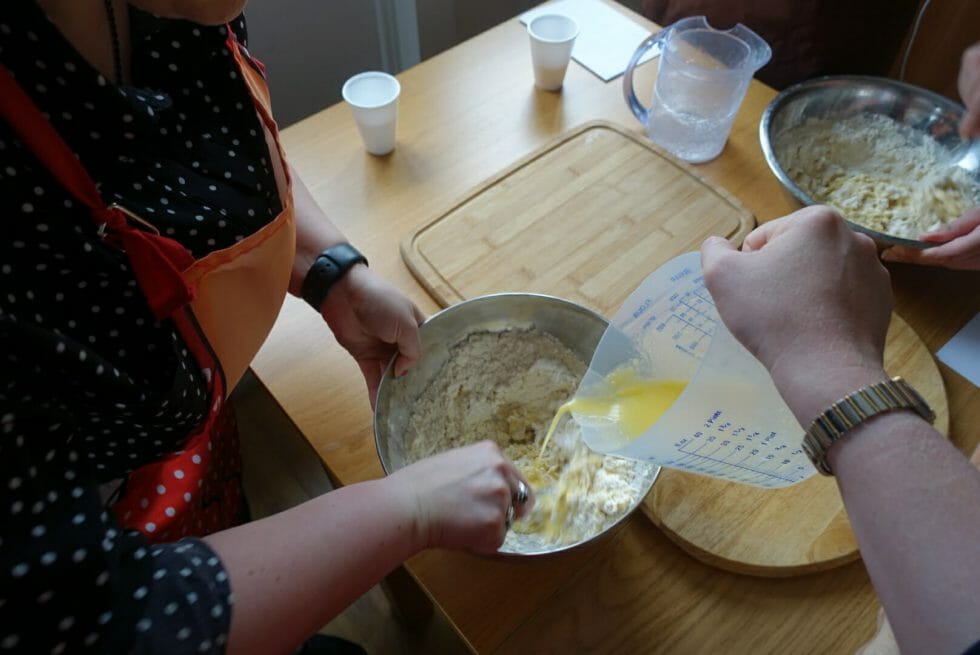 However the main thing you knead to know (sorry about the pun) is that it’s all in the kneading of the dough! This is something that is best learnt by experience, a recipe description is no substitute for getting hands on and seeing the texture of the dough change as you knead it vigorously. Apparently you can also do this in a mixer, however you’d need to keep checking the dough until it reaches the right consistency.

Haydy taking out her aggression on the dough!

After a bit of a work out kneading, our dough finally resembled Alla’s. It had a smooth surface and held a finger indentation without springing back straightaway.

Leaving the dough to rest we went to the kitchen counter for Alla to explain the fillings to us.

We were making two types of dumplings, a meat one that is boiled and a cheese one that is fried.

Alla explained that the Russian dumplings or ‘pelmeni’ had originated in China. They then moved across the Russian border to Siberia, which is where her Grandad was from. The meat filling was the traditional preparation and is made from fatty cuts of meat – e.g. beef or pork. 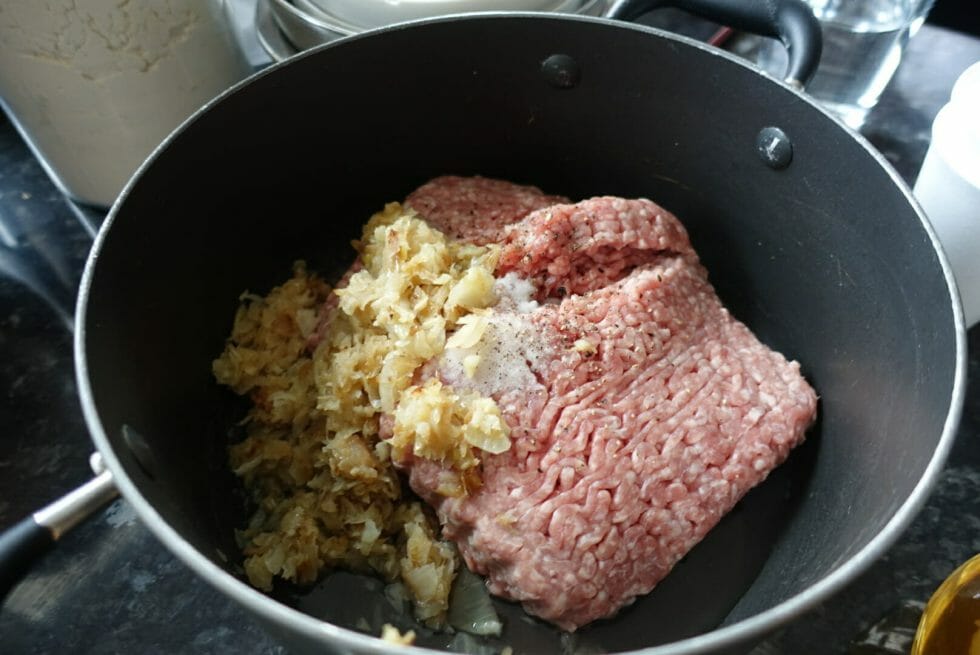 The pork filling – with fried onions, garlic, salt and other spices

The meat was well mixed with the other ingredients, until the meat looked lighter in colour. 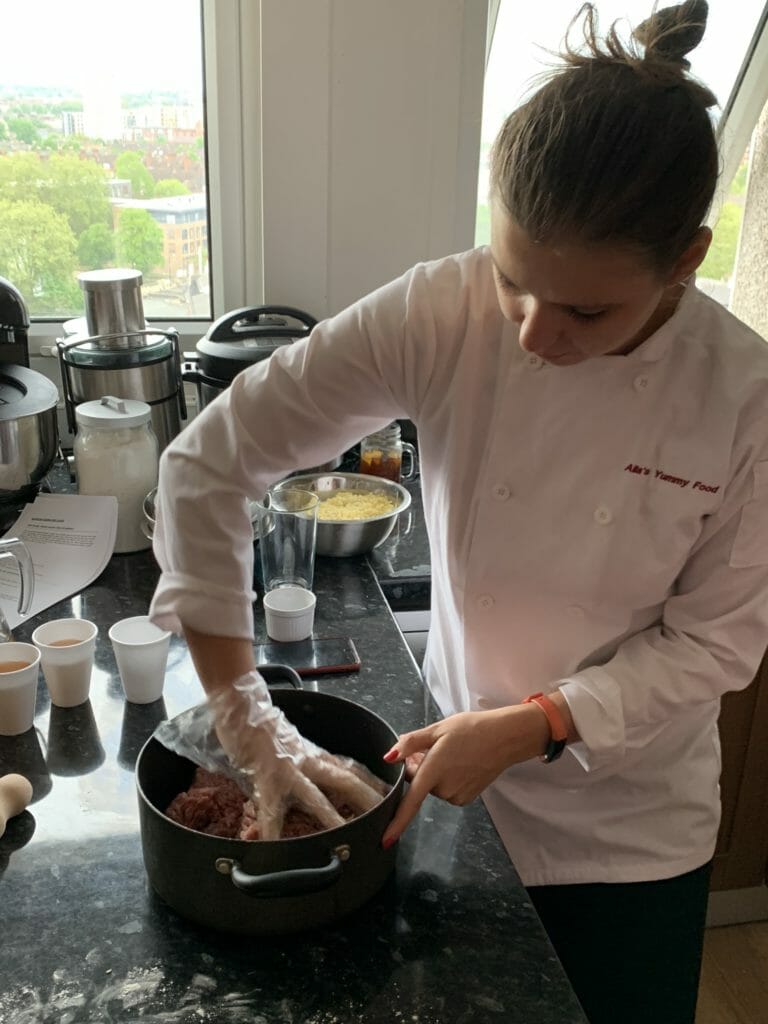 The cheese filling was something that Alla has come up with – as its a blend of three different cheeses: 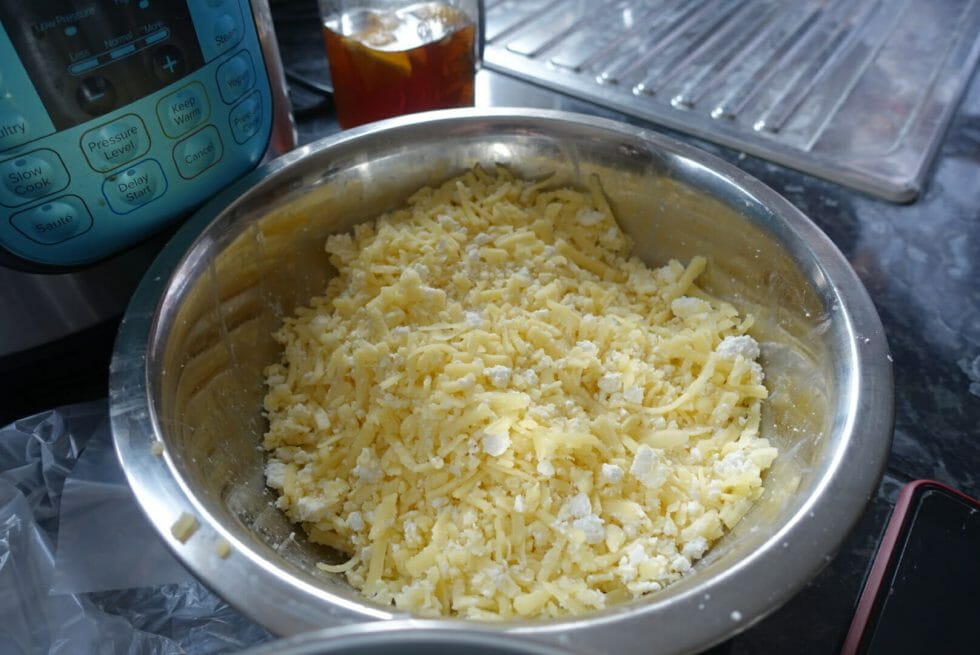 Alla has perfected her cheese recipe with cheddar, mozzarella and feta cheeses

The cheeses were well mixed until combined and could be formed into small balls.

We cut out the dough using ramekins as cutters (they are just the right size). Then you take a small amount of filling and put it in the middle of the dough circle. Folding the circle in two, you have to seal the edges around the filling really well. I found this easier to do with the meat than the cheese, which you need to squash a little. Then you stretch the dumpling out horizontally and wrap the two ends over each other to get the classic shape. 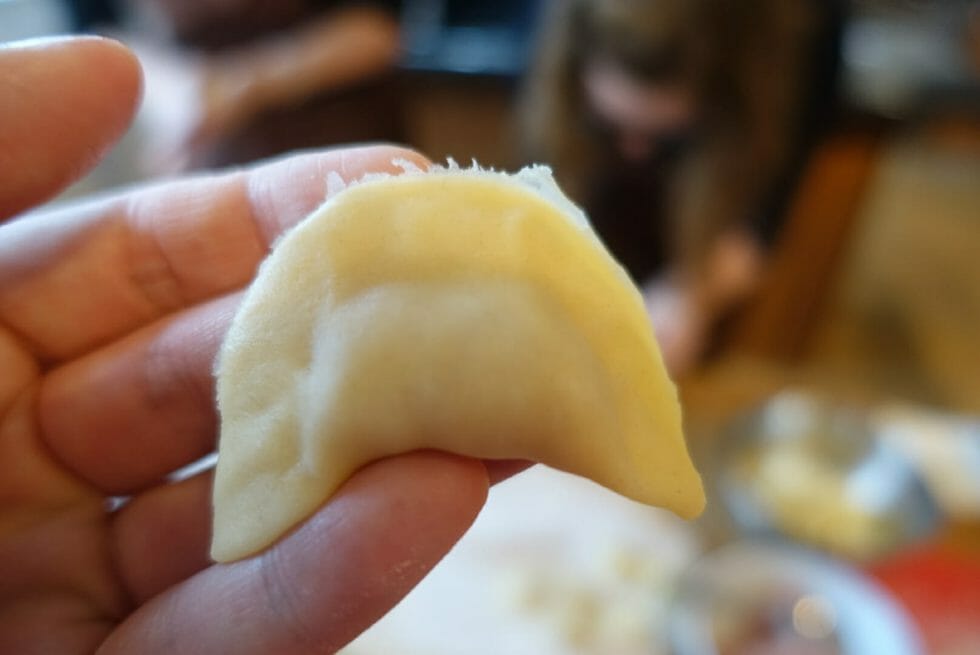 Before the final fold

Alla mentioned that some people use a mold to make their dumplings (if you spot them with out fold and looking super uniform then that’s probably why!), but she prefers the hand made method. As we made more and more, we really did get the hang of it. 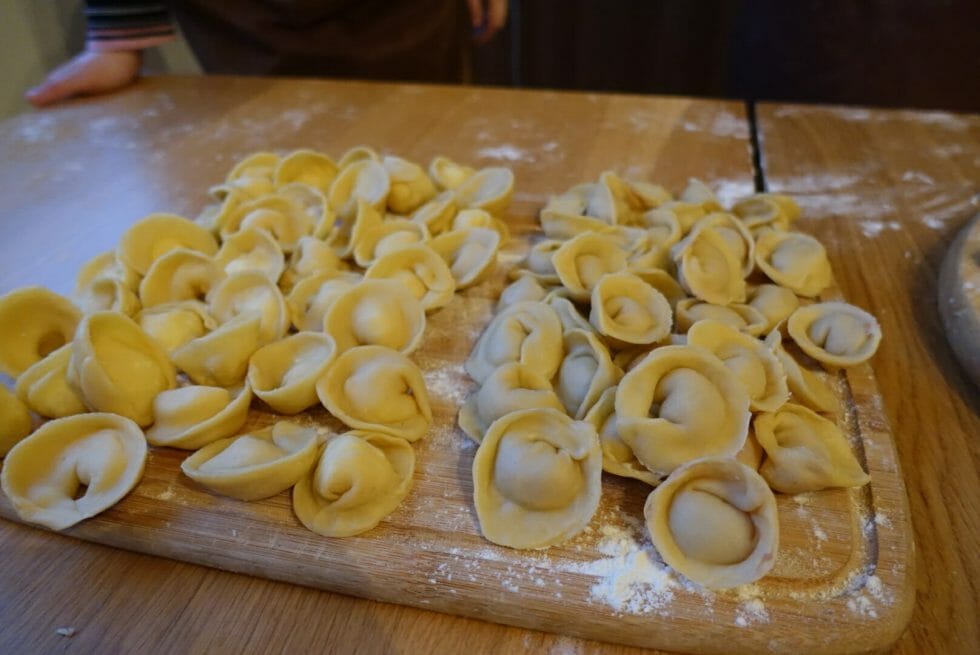 We ended up with tonnes of dumplings! 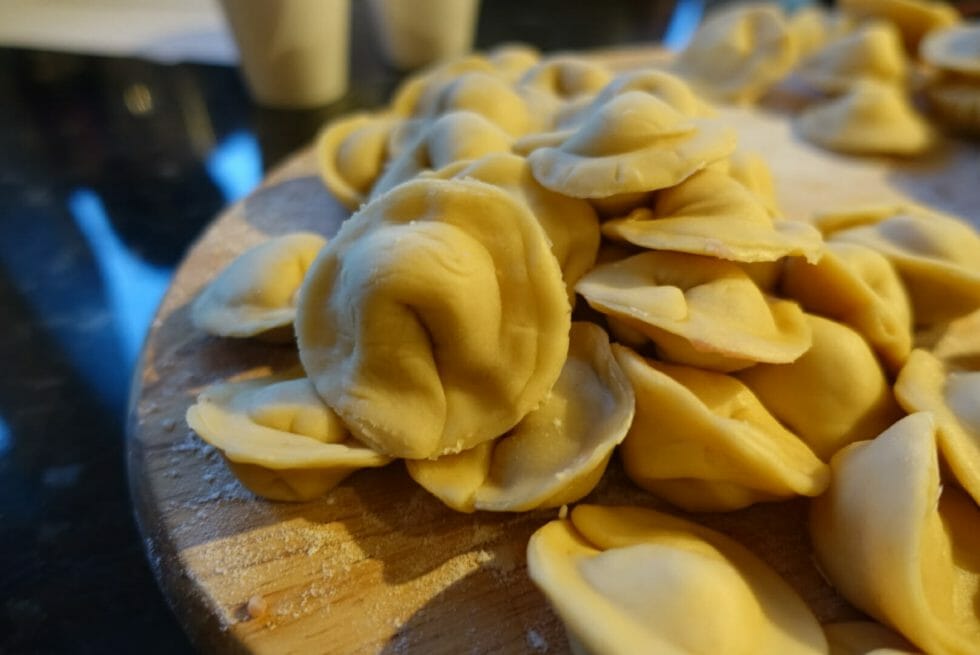 Close up of our dumpling handiwork

After wiping down the dining table, Alla left us to set it for the tasting and started cooking the dumplings.

The meat ones were boiled in a simple broth, made with a stock cube and bay leaf. The dumplings need to be cooked in small batches for about 8 minutes. When they are cooked they will float to the top and can be taken out with a slotted spoon (to allow you to cook more & serve everyone at the same time). 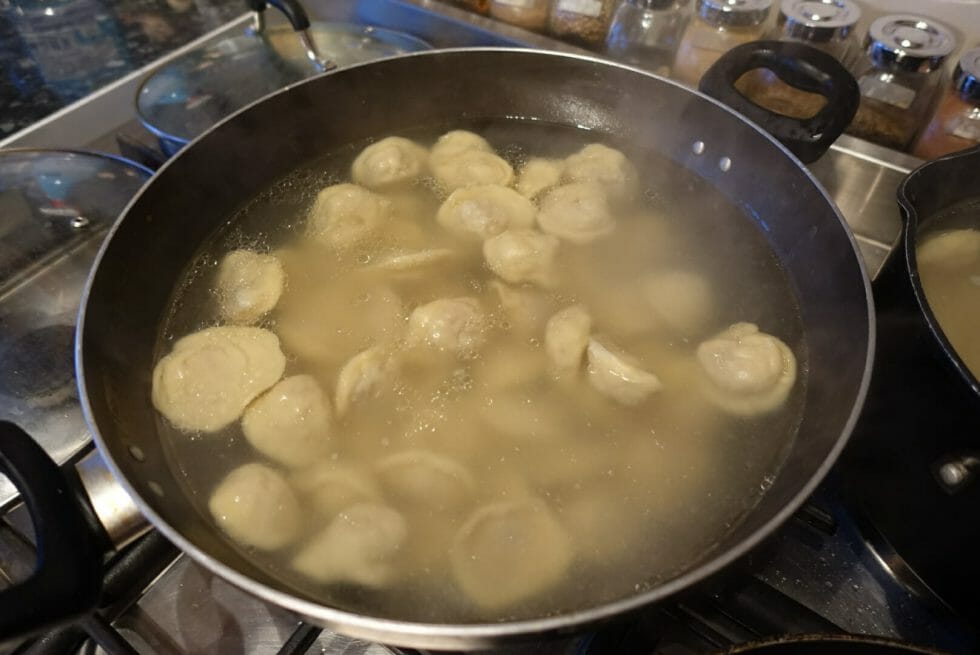 Boiled dumplings in stock – starting to float to the top 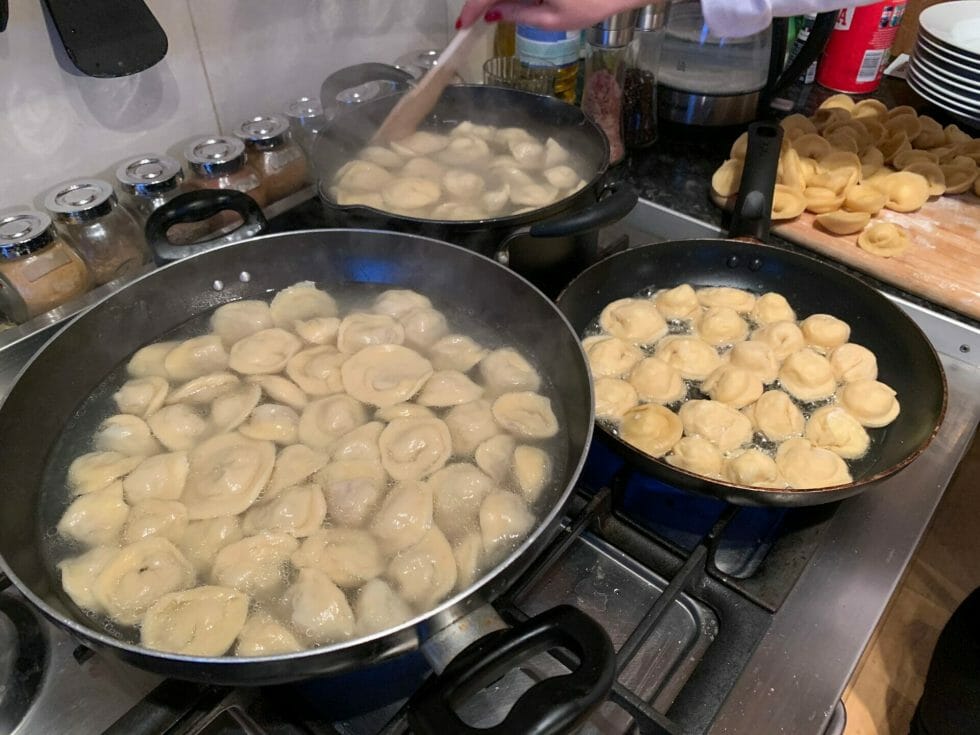 All the dumplings cooking!

The cheese dumplings were fried in butter (yum!! I LOVE butter!). Cook them over a medium heat so they don’t burn. If you add a little liquid and cover this will keep them juicy, however I loved the ones just fried in the butter. This made them crispy on the outside with the molten cheese in the middle. 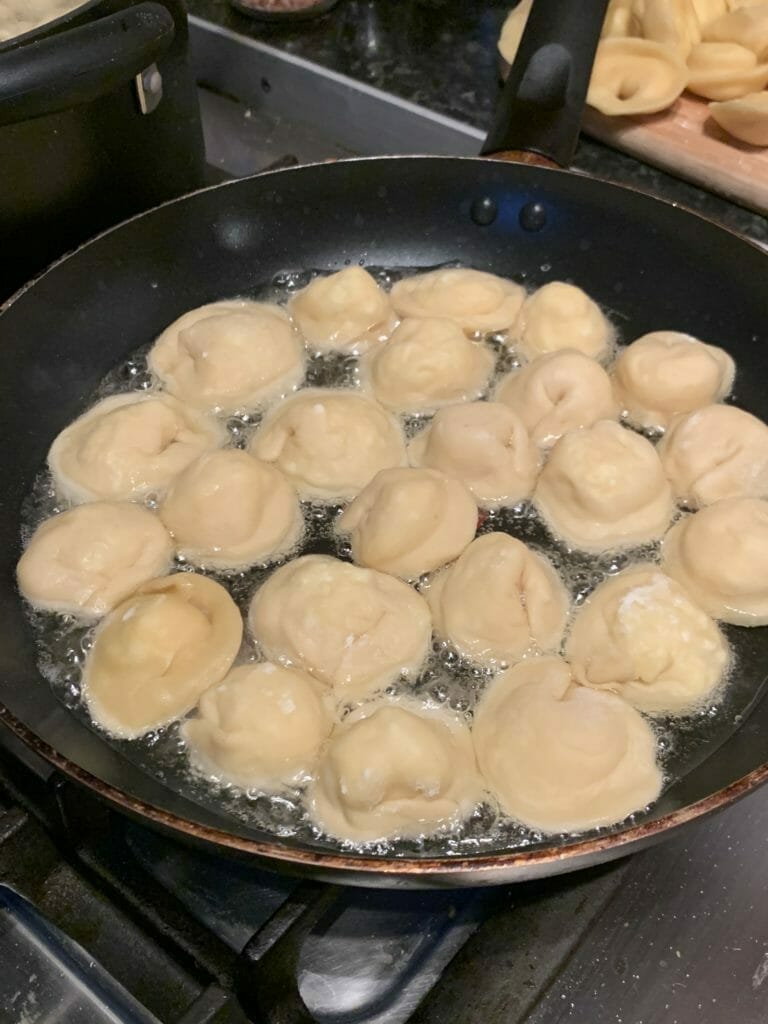 Time to taste them! 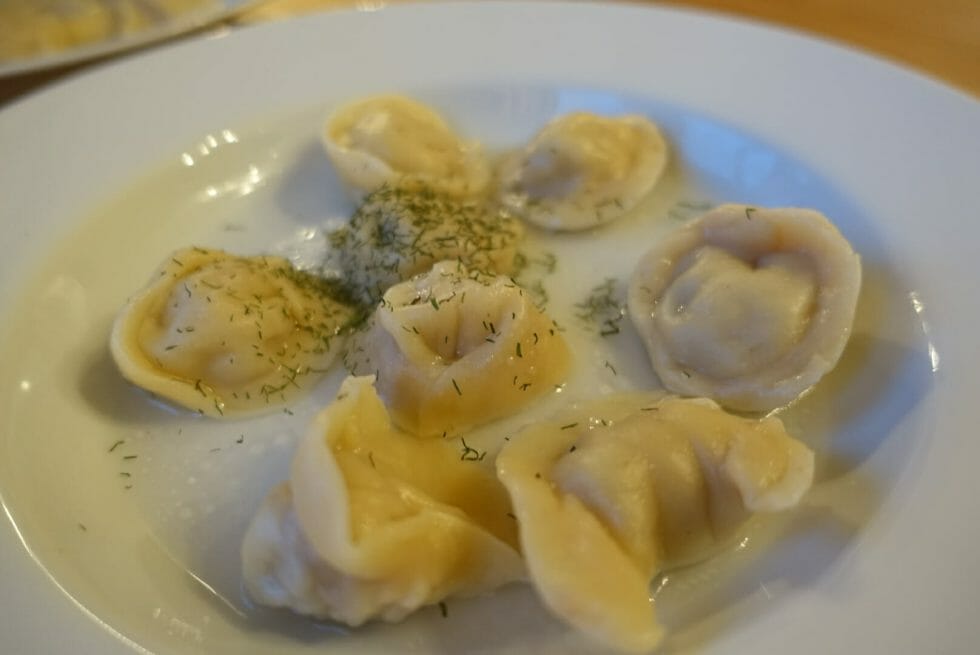 However Alla only had the dill available when I went, but it added an authentic taste that I recall from Russia.

Read more about Russian food: What Katie Ate in Russia 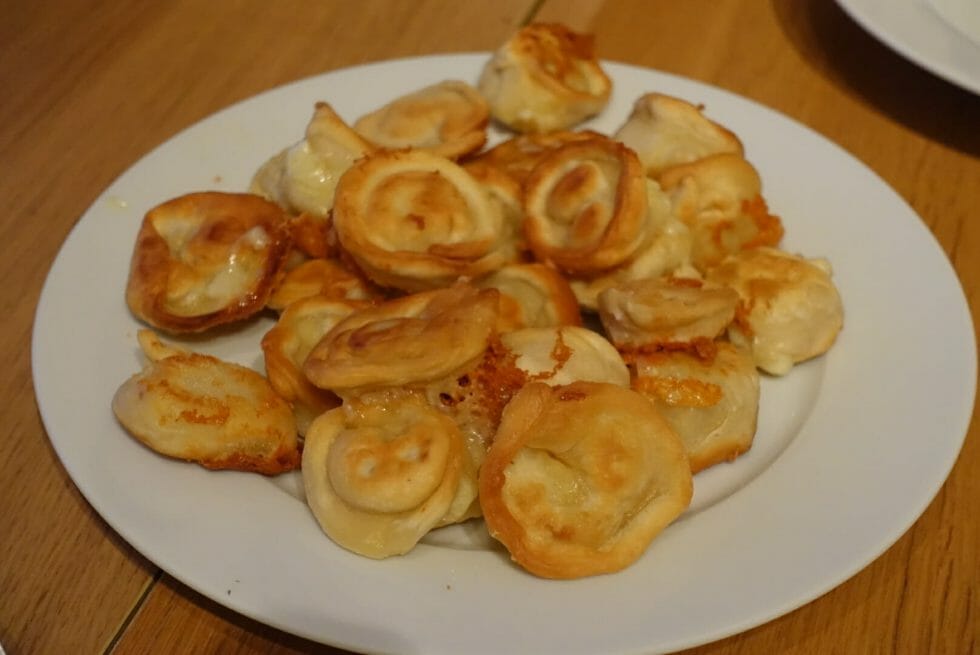 A plateful of cheesy goodness! 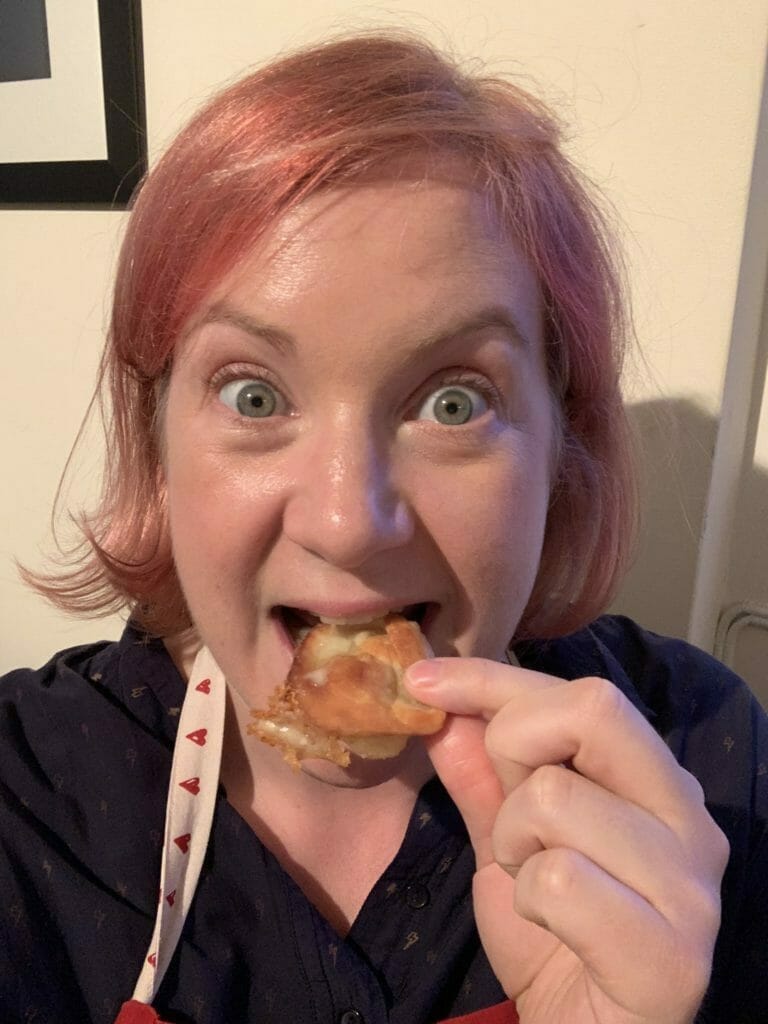 The cheese dumplings were like crack! I could have eaten my body weight in these if Alla had been able to cook that many. She recommends the cheese dumplings for eating in front of the telly on a night in, and I can see that they make the best comfort food. 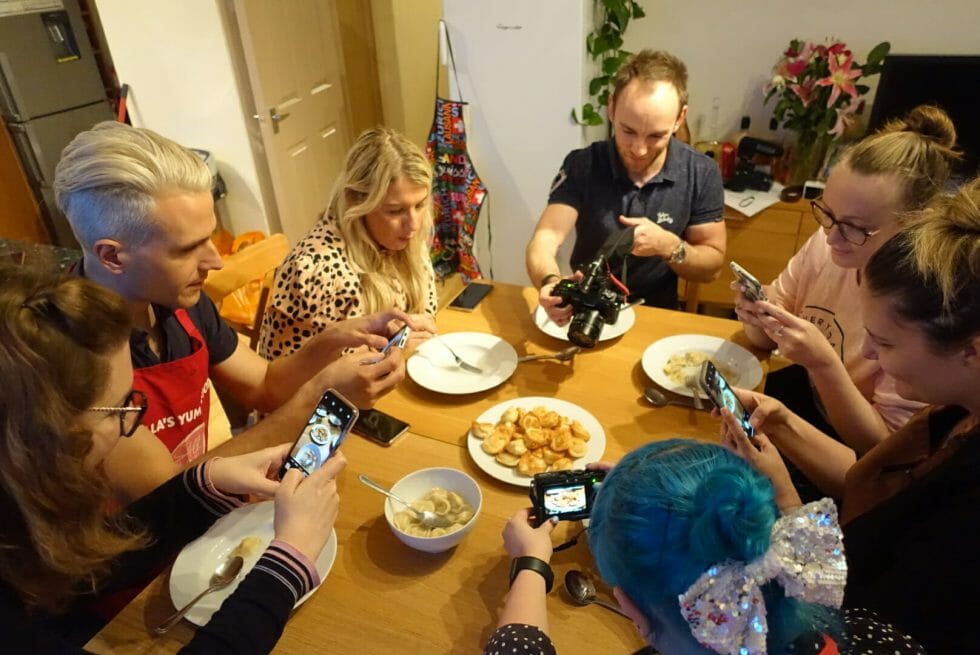 Bloggers at work – also called love at first sight of the cheese dumplings!

I really enjoyed the hands on experience of making all the dumplings from scratch. It was very satisfying to eat the results of your efforts too. We did make a lot of dumplings and got a portion (8-10) of each kind of dumpling to eat on the night. As I mentioned I could have eaten way more of the cheese ones, but I think that was due to my hangover! Unfortunately due to the nature of the dough, these dumplings can’t be transported ‘fresh’. Alla did tell us how we could freeze them, but we had none to take away after the class.

The full price ticket for this class is £45, which is quite pricey for the experience. 8 people (the maximum class size) felt crowded in Alla’s apartment. If the experience was limited to 6 people then it would be more comfortable for everyone to fit into the kitchen/living space. Also you can get similar dumpling making classes in professional kitchens in central London, which include a glass of wine with dinner, for the same price.

However you won’t get Alla’s stories and family memories, which really make the experience unique.

You leave the class with the practice of making the dumplings, a full stomach and the recipes for the dough and the fillings.

A big thanks to Alla for hosting us and thanks also to Love Pop Ups London for the opportunity to make my own Russian dumplings with Alla!

What if you don’t want to make your own dumplings? Then check out my review of the London Dim Sum tour with Koala where you get to try lots of Chinese dumplings in London’s China Town without having to cook!

Pin me for your Russian dumpling inspiration! 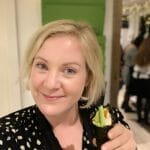 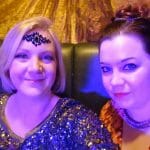